Famously, while filming his directorial debut (1982’s Piranha II: The Spawning), director James Cameron fell ill on location in Rome.  That night, he had a nightmare where a knife-wielding metallic torso dragged itself desperately from an explosion.  Paired with the then-recent success of John Carpenter’s Halloween (1978), Cameron set to work on The Terminator (1984), the sci-fi slasher that would catapult him into the upper echelons of Hollywood A-List.

While this may seem like an odd-digression for a review about Jordan Peele’s sophomore film, 2019’s doppelganger horror movie Us, the contexts in which both films were created and released run oddly parallel to one another.  Both are second features made by men whose creative output, at times, suggest that they are products of a deeply unwell but nevertheless hyper-competent mind.  Seemingly borne of half-remembered fever dreams whose nightmarish impressions linger on the palette long after everything but the visceral feeling of dread that they inspired as faded away, these infernal germs of an idea incubated in the same late-seventies / early-eighties horror movie milieu (in Peele’s case, movies like C.H.U.D., Wes Craven’s A Nightmare on Elm Street and Michael Jackson’s Thriller) and were released into social contexts ideally suited to their dark themes and expressionistic imagery (for Peele, it was in the immediate wake of #OscarsSoWhite, Black Lives Matter and his own debut feature Get Out (2019). 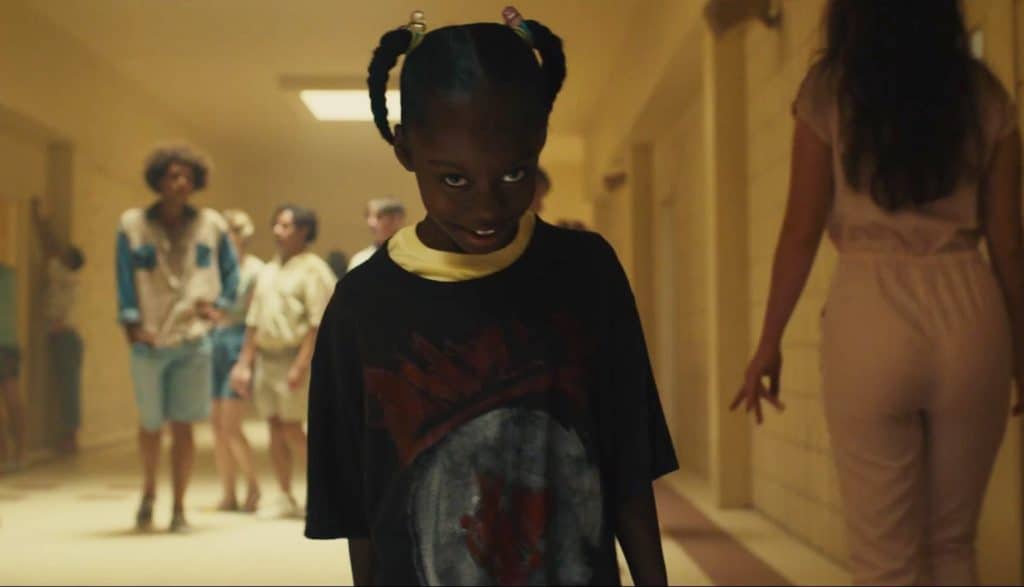 To even describe the plot of Us is like trying to explain a dream after you’ve already started to wake up.  In the light up day and in more familiar surroundings, it all seems so inconsequential.  The terror is still burrowed deep in your skin, but the words cannot seem to recapture that euphoric state of fear that jolted you awake in the middle of the night and kept you there until you dared to close your eyes again.  It’s all tone and timing and the unsettling certainty that something, somewhere, is terribly askew… in other words, it’s a feeling, a not-entirely understood impression that you nevertheless accept as true.  It’s something that words, by their very nature as concrete, calcified things, can never hope to properly capture,

Years after being attacked by her exact duplicate in a darkened hall of mirrors on a Santa Cruz boardwalk, Adelaide Wilson (Lupita Nyong’o), her husband (Winston Duke) and her two children (Shahadi Wright Joseph and Evan Alex) return for family vacation.  Sensing that something is… off… about their surroundings, Adelaide’s fears are vindicated later that night when a family consisting of their exact duplicates invades her home and holds her family hostage.  Dressed in red and brandishing an oversized set of pointed scissors, the doppelgangers – who are, at times, compelled but not required to mirror their doubles’ actions – attempt to kill off their corresponding family members: an occurrence that, apocalyptically, seems to be happening to everybody throughout the city, country and, possibly, the entire world.  When Adelaide’s doppelganger, Red, abducts her son and takes him to the subterranean lair from which she emerged, she descends into its cavernous depths to retrieve him and escape with her family. 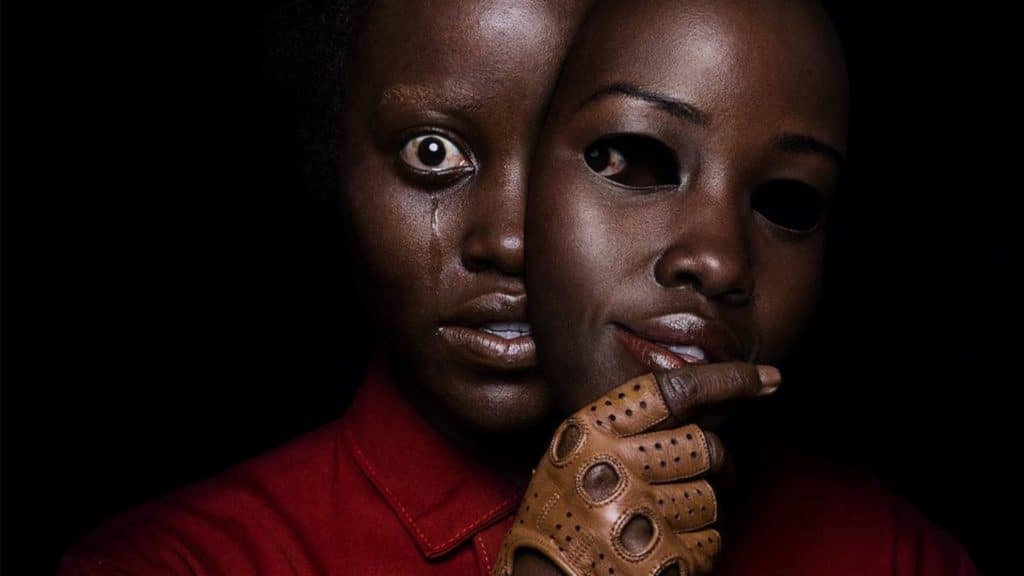 There are, of course, a number of twists, hints and Easter Eggs along the way as to exactly what is going on that more astute or motivated viewers will doubtless pour over with nihilistic glee the second that the credits start to roll, but the basic outline of the movie, while deeply unsettling as a concept, is nothing too dissimilar from any number of slasher films from the subgenre’s heyday in the 1980s.  You have a crazed killer (in this case, several), a visually distinct melee weapon (scissors), a terrible place (generally the Santa Cruz boardwalk, specifically the Hall of Mirrors), a home invasion and a final girl (Adelaide).  And on that surface-level alone, it is an incredibly successful version of exactly that kind of movie; the scares are effective, the kills are graphic, the killers are distinct and memorable and the finally moments are as chilling as anything committed to film since Dr. Loomis looked out of the bedroom window only to see an empty patch of grass where Michael Meyers’ body should have been.

There is, however, so, so, so much more to Us than merely successfully replicating a forty-year-old formula.  If there was, it wouldn’t stand as the year’s unimpeachably best horror movie, let alone as the best all-around movie from 2019 (sorry, Parasite).  As was the case with Get Out, there is so much more on Jordan Peele’s mind than his merciless, trademark blend of horror-comedy; psychology, sociology, economics, race politics, class stratification and even religion are all filtered through a lens of post-80s pop-culture to create a one-of-a-kind Rosetta Stone of damn near everything going on in America today.  Given the extreme specificity with which Get Out operated, Us acts as the perfect follow-up to that early Peele offering, blowing up Peele’s experiences and obsessions into the same apocalyptic grandiosity with which he ends this movie. 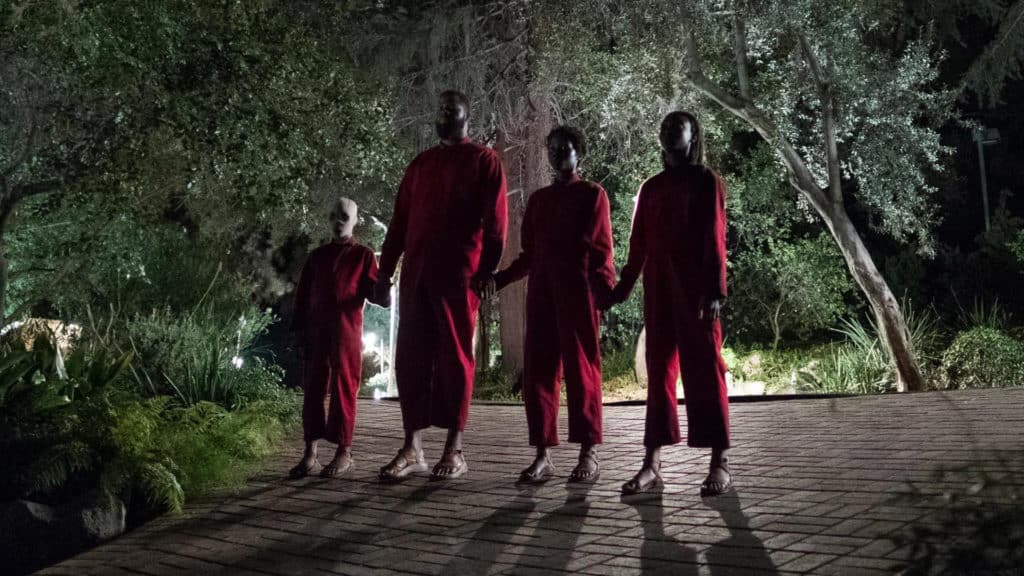 The level of craft on display in the film is simply beyond the pale of even what we’ve come to expect from a major release like this.  In a just world, Nyong’o would have been nominated (and won) both the Lead and Supporting Actress Oscars for her double role as the films protagonist and antagonist.  Just like Jake Gyllenhaal in Nightcrawler (2014) or James McAvoy in Split (2017), she delivered an absolutely transformative performance where any semblance of the woman we’ve come to know since her Oscar win in 12 Years a Slave (2013) gave way to a complete and utterly unrecognizable creature we see in front of us: not once, but twice in the same movie.  In fact, every single core member of the cast – Nyong’o, Duke, Joseph, Alex – pull double-duty to equally impressive ends.  Every single one of them, even the children, by rights should have led the acting categories in last year’s Oscars, instead of being completely shut-out like they were.  Hell, the movie features one of the great Elisabeth Moss performances of all time – a journeyman actress who has been absolutely killing it in recent years with her work in The Handmaid’s Tale (2017 – present), Her Smell (2018), The Invisible Man (2020), Shirley (2020) – and she’s maybe only the fifth best performer (turning in maybe the eleventh / twelfth best performance) in this movie.

Although this runs steadfastly against the popular consensus on the matter, Us is a far better, far more ambitious and all-around far more successfully-executed film than its celebrated forebear from Jordan Peele.  And while it is perhaps not as subtle and nuanced an indictment of late-stage capitalism as Bong Joon-ho’s Parasite (2019), it “fails” in the same way that so many of the high-concept sci-fi and horror films that inspired Peele in the first place did: simply by virtue of having too many different things inescapably on its mind.  Whatever minor gripes I may have had on first viewing, however, simply melt away on the rewatch, when you fall into the psychic currents of Peele’s vision and let the nightmare logic of the thing carry you to its ultimate, apocalyptic conclusion.