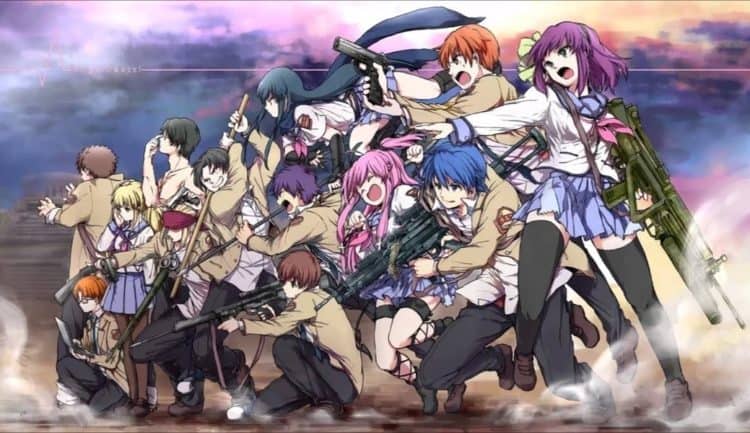 Angel Beats! is a Japanese multi-media franchise focused on a group of young people who are stuck in a high school-like limbo. The various components of the franchise tell different parts of the overall narrative, thus providing interested individuals with a more comprehensive look at what happens than otherwise possible. Here are 10 things that you may or may not have known about Angel Beats!:

Angel Beats! didn’t start out as a visual novel by the visual novel studio Key, but it is connected because some of the people behind it are from Key. As such, it shares a lot of similarities with Key works, which is relevant because Key specializes in works that are meant to make their young male audiences cry.

The franchise is set in a kind of Limbo. For those who are unfamiliar with the concept, Catholic doctrine envisions Limbo as an in-between place where people will wind up if they die in original sin but weren’t bad enough to be consigned to Hell. There is a belief in the existence of a Limbo of Infants for unbaptized children who haven’t sinned, but it isn’t official doctrine, meaning that there is still theological debate over it as well as other possibilities.

Angel Beats! features a Limbo that looks like a high school. Its occupants are young people who have some trauma or some other kind of issue that needs to be cleared up before they can move on.

There is room for discussion for whether God in Angel Beats! is benevolent or not, assuming that there is such an existence. On the one hand, the Limbo is meant to provide its occupants with a chance at a happy school-life to help them get over their issues before they move on; on the other hand, there are explicit measures in place to prevent it from turning into a true paradise, which involves implied soul-munching. There are bound to those who disagree with the idea of high school being happy, but judging by the number of Japanese works set in high school, this seems like a cultural difference.

Not all of the occupants of the high school setting are young people with issues that need to be cleared up. Instead, the rest of the students as well as the staff are called NPCs because they look like humans but don’t actually act like humans. It is possible for the occupants to be turned into NPCs when they are devoured by shadow monsters that come out when an automated system detects love, which is not permitted because it would turn the Limbo into a true paradise. Then again, considering that the one individual who was devoured managed to come back again because of sufficiently strong feelings, it really is hard to pass judgment on the whole system because there is a serious lack of information.

6. The Protagonist Had a Rough Life

Given the people involved in making the series, it should come as no surprise to learn that the protagonist Yuzuru Otonashi had a rough life. In short, he had to spend most of his life working menial jobs to support his younger sister, who died of cancer at a very young age. This provided him with purpose, which inspired him to become a doctor. However, that never happened because he was caught in a train accident on his way to the college entrance exams.

7. Other Characters Had Rough Lives As Well

Unsurprisingly, other characters had rough lives as well. Examples range from paralysis and parental abuse to being ignored by their parents in preference for a more talented brother before being forced to replace him in his role when he died.

8. The Heroine Is Kanade Tachibana

The heroine of Angel Beats! is Kanade Tachibana, who starts out as a enemy who is called Angel by most of the characters because they believe that she is an angel placed in the setting to watch over things. She isn’t, but Kanade does want to maintain order for the purpose of helping people move on in a smoother manner.

9. Kanade Wants to Thank the Person Who Gave Her Their Heart

Kanade’s issue is that she wants to thank the person from who she received a heart donation. This turns out to have been Yuzuru, whose last act while alive was signing a donor card. Key being Key, Kanade moves on while Yuzuru is literally begging her to stay with him.

The ending is a bit ambiguous because there are two epilogues. One is that Yuzuru has stayed in the high school, serving as the school president so that he can help other people move on. The other is that two people resembling Yuzuru and Kanade meet in the real world, suggesting that those who move on are eventually reborn. Some fans interpret the second scene as the product of Yuzuru’s imagination as a way of coping with being stuck in the high school because he isn’t meant to be there in the first place because he died content, presumably because those fans want everything to be even more depressing.