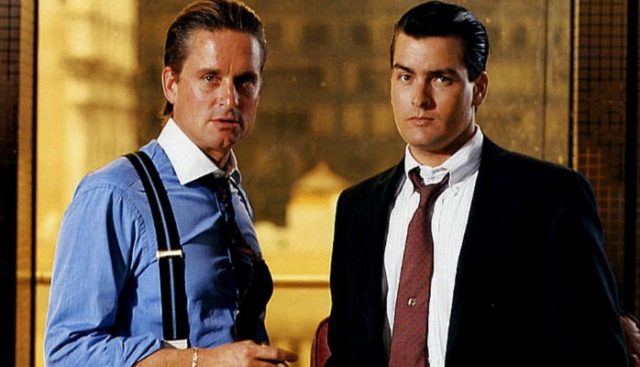 “Greed is good.” Those iconic words, spoken by Gordon Gekko, spurred a generation to start paying more attention to Wall Street and the stock market in a way that had never been fully embraced before by so many. Eventually the fervor would die down among some crowds but for those that were so gung-ho about the entire experience it was resounding call to arms or something to be ignored since obviously movies don’t always depict reality. Whether they do or not however this film was something that made people stand up and pay attention as they witnessed a young stockbroker doing anything and everything he can, ignoring the legality of much of it, in order to get ahead and make his mark in the world.

It was something that intimidated a few people and inspired others.

10. It’s the first feature to show a mobile cell phone.

The cordless mobile phone that can be seen in this film was the first of its kind to be shown in any movie.

9. Michael Douglas had to work with a speech instructor.

This was to keep pace with the rapid-fire dialogue that had to take place during the movie so that it was understood that the life of a stockbroker was fast-paced and didn’t allow for much spare time.

8. Douglas was smoking up to 40 cigarettes a day.

It sounds entirely unhealthy but apparently the movie was something of a stressful piece to make and as we all know stress affects everyone differently.

He chose his own father to play the role which make sense because they likely had more chemistry, you would hope.

6. There was tension between Sean Young and Daryl Hannah.

Young believed that she deserved Hannah’s role which was funny because of all the drama that went on between the two of them.

5. It was thought that Michael Douglas would try to micromanage the film.

At that point in his career Douglas was known as a producer more than an actor so it was thought that he would be second-guessing the director the entire way. He never did.

4. Charlie Sheen and Sean Young hated each other in real life.

This is why it’s confusing that Young would want her part since she had no love at all for Sheen, and it would have possibly shown in the acting.

She had to play someone that was entirely materialistic and unfortunately that’s not what she’s like in real life.

2. Hannah has never seen the film.

She didn’t have a good working relationship with the director and as a result she wanted nothing to do with the movie once she was done.

She would show late to the set on a constant basis and it’s rumored that she took all of her outfits from the movie when it was all over.

Despite the popularity of the movie it sounds like making it was a nightmare.