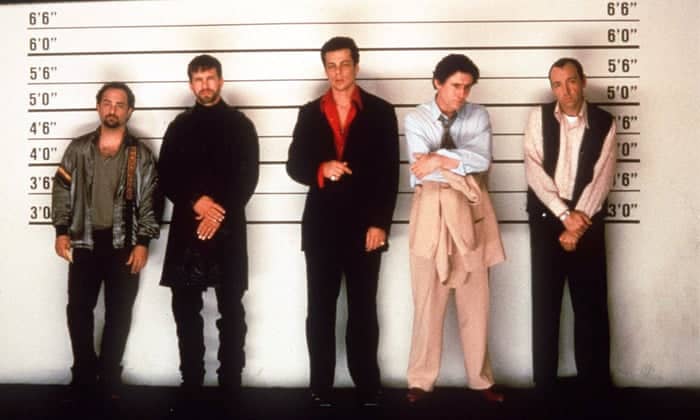 Have you ever been expected to do something in a serious manner and found that one little slip was all it took to break your concentration and thereby ruin the moment? It could be anything, something small that shouldn’t be hilarious or probably shouldn’t break your focus, but a lot of people might agree that a little flatulence is bound to cause embarrassment, shock, and yes, in many cases, laughter. It’s hard to get around really since farting often sounds ridiculous as the noise can be heard emanating from a human body. From the volume of such noise to the unfortunate smell, a lot of people can’t keep a straight face when around another person that’s broken wind. The unfortunate thing is that in a movie such as The Usual Suspects, this can have disastrous consequences since the lineup scene has been dubbed ‘the fart seen’ around the world’. It makes sense, I promise, especially considering that the scene eventually had to be used as-is in order to keep things moving forward. But a lot of it is able to rest squarely on Benicio Del Toro’s shoulders since the actor apparently enjoyed one too many hot dogs for lunch and upon coming back to this scene was unprepared when the result of his repast emerged in a sudden burst of flatulence that had the other cast members beside him laughing and trying to hide their mirth.

According to Kevin Pollak, Del Toro somehow managed to fart for 12 different takes, and just as unfortunately the rest of the cast was in a rather silly mood that day and were messing with the lines at the same time, which made the director, Bryan Singer, more than a little angry as he proceeded to chew them out before trying to continue. This scene wasn’t supposed to be funny in the least bit but after a while Singer kind of had to go with it since the hilarity was too difficult to ignore, and was therefore kept in. To be fair, it did improve the camaraderie among the group and it was something that managed to entertain the audience, so it became a mistake that, despite being unplanned, managed to create a great moment that people have remembered ever since. Hey, fart jokes are usually pretty funny, but upon learning that they’re the reason why certain scenes happen it’s hard to say that they’re not humorous at all. Looking back at this scene now it does feel as though it would have been kind of bland had it not gone the way it did. Singer might not fully agree but it does appear that he finally just crossed that line and realized that letting the cast have a bit of freedom on that note was a better idea than trying to stymie their need to cut loose just a bit. Every now and then it’s best just to be silly, even if such moments don’t make it into the movie.

Let’s be honest here, it’s tough to do anything or even focus that much when someone nearby has a serious and very loud gas problem, as it’s a bit distracting and definitely has the effect of throwing people off their game for a moment or two. But admit it, sometimes a good fart joke can be insanely funny and can even liven up a scene that might otherwise be a bit boring. This type of humor is rather silly, to be honest, and doesn’t need to be embraced at every possible moment, but it does have its place in cinema and has become something that is fun for the audience and can be a great diversion from the otherwise serious nature of some movies. It’s unexpected in a way, since like it or not everyone will do it from time to time, but the expectation is that we either hold it in or find another spot to do it where the sound won’t bother anyone else. Plus, eating too much of certain types of food could easily cause a gas buildup that’s going to have to go somewhere at some point, which means that one will be belching a lot or will be forcing those gasses out another route. It’s a bit rude and uncouth no doubt, but as a necessary bodily function, it’s going to happen, even if it’s not always at the right time. One has to wonder just what Benicio had in mind when felt it coming, and whether or not he really meant to keep doing this, since once would be a mistake, twice might be understandable, but 12 times has to be deliberate.

Hey, at least the guy got a laugh out of it along with the other cast members, and he did manage to finally get the director to go with it.