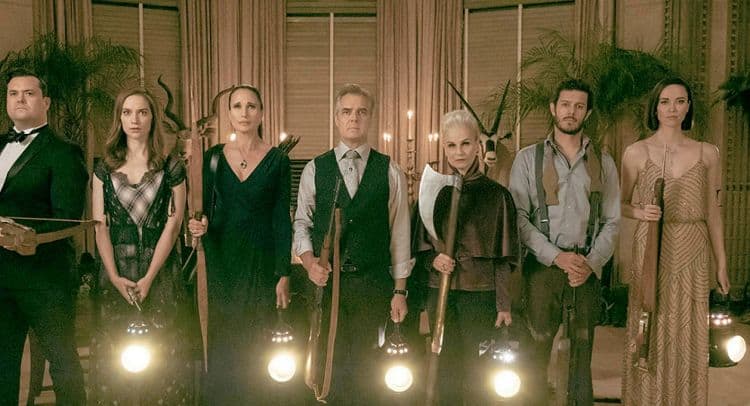 In one of the more underrated horror gems in the last few years, Ready or Not made a splash in 2019 thanks to its clever blend of dark humor and horror. The feature is about Grace, who should be ecstatic about being married to the man of her dreams; however, the horror begins during the weekend with her new in-laws. The new bride must hide from midnight until dawn as the rich Le Domas family hunts her down with guns or any weapons that could kill Grace. The new bride must quickly learn how to survive the night and outsmart her not-so-loveable relatives. Though Ready or Not didn’t set the box office charts on fire, it was a great example of how to craft a low-budget horror film, but also introduced an element that should’ve been given more of an exploration, The Le Domas family.

What’s truly fascinating is the unseen villain of the movie, Le Bail aka the devil himself. The film gives a brief explanation about how the Le Domas family got into this situation, Victor Le Domas founded a board game empire that made them the rich bastards that they are, but that also came with a price. He met a man named Mr. Le Bail, who carried a mysterious box with him, who made a wager with Victor; He promised him wealth and happiness if Victor figured out the mystery of the box. We don’t get much information about the unseen villain in this film, but if you pay attention to the subtle things like the devil symbol for the game then you’ll understand the clues that point to the true antagonist of the film. However, what’s intriguing about the Le Domas Family is that there isn’t a hint of sympathy or remorse for their actions. Daniel is the only one who feels any true guilt, whereas everyone else feels justified in their attempt to murder the new bride. Why? Has the promise of eternal wealth blinded the family from the difference between right and wrong?

It’s an interesting topic to explore when it comes to the 1% who dominate this country. What people would do for fame or money has always been a juicy topic and showcasing it from a horror/comedy perspective could really be a fresh and exciting venture into a world that horror doesn’t dabble into very much. The devil himself never has to make an appearance. While it’s intriguing to know just how Le Bail got a mysterious box containing a curse from the man downstairs, there’s a nice layer to keeping that aspect as murky as possible. But at what great lengths did Victor Le Domas go to obtain his wealth? No one just randomly stumbles upon a man who can promise you a lifetime of wealth and security. Surely, this man had to know that he would be forced to play “games” with new members of the family. Is he a psychopath? Does he not value the lives of lower-class citizens? Did he grow up in such a poor environment that being rich was the only way to escape the hellish neighborhood that he was living in? The story of the Le Domas family would be so much more than just typical horror affair, which is exciting and a necessary tool for the genre itself. Modern horror has evolved these days with so much social commentary regarding race, class, sex, and these intricate layers that explore real world problems hit closer to home than some murderous brute trying to gut someone like a filthy pig.

However, there’s also the complexity of the family themselves. I’m not an emotionless serial killer so correct me if I’m wrong, but no one just accepts murdering someone, right? Clearly, Alex didn’t care too much. It doesn’t matter how much your girlfriend is pressuring you into marriage, he should’ve avoided it at any and all costs. This also puts the family in huge danger and given the fact that everyone explodes into nothing but guts and blood, is that worth getting married? How was the family during their first hide and seek mission? Were they scared? Or did they gleefully hunt down and murder the poor innocent bride or groom. It’s a shame that Ready or Not wasn’t much of a box office success as there’s so much rich layers that can be explored in this unique world. Not every horror villain needs a prequel to explain their backstory, but when there’s so much content that creates intrigue and excitement, then a spin-off isn’t such a bad idea.