Home
Entertainment
News
What We Learned From The Trailer For “Impeachment: American Crime Story” 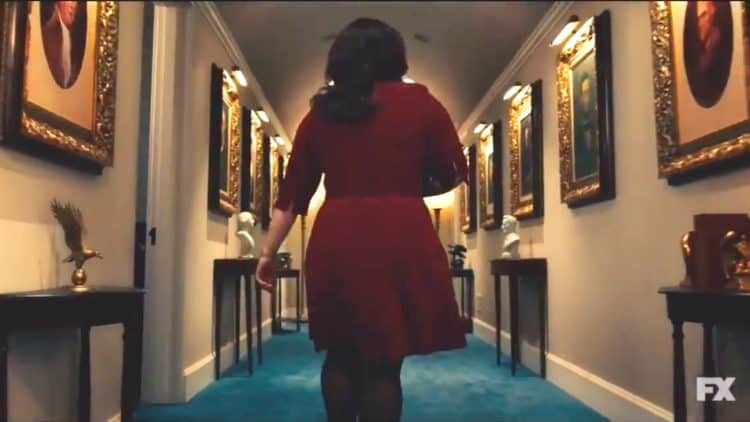 We just got our first peek at Monica Lewinsky in “Impeachment: American Crime Story.” OK, actually all we saw was her back as she is walking through the White House holding what appears to be a present for the president. Ominous music plays in the background, and the trailer ends with one line of dialogue from President Clinton’s secretary, “Mr. President, Ms. Lewinsky’s here to see you.” It almost makes you want to yell, “Don’t go in there, Monica!” as though this were a horror movie instead of a ripped-from-the-headlines true-crime show.

The FX show is the third in the “American Crime Story” limited series by Ryan Murphy, and if the other two seasons are anything to go by, it’s going to be excellent. It stars Beanie Feldstein as Monica Lewinsky, Sarah Paulson as Linda Tripp, and Edie Falco as Hillary Clinton. It was also just announced that Cobie Smulders (“How I Met Your Mother”) will play Ann Coulter after Betty Gilpin had to give up the role.

The series will, of course, look at the sex scandal that led to President Clinton’s impeachment in the late ’90s – the first impeachment of a U.S. President in more than a century. It will also look at the intense media frenzy that surrounded the main characters – none of whom were equipped to deal with such madness. Instead of focusing on the president in the series, Murphy is going to focus on the women who were at the center of the story – Monica Lewinsky, Linda Tripp, and Paula Jones – during a time when women’s roles in politics were changing, and the media itself was changing for good as well.

The series was created by Ryan Murphy, who also created the similarly-named “American Horror Story” series, also on FX. Sarah Paulson, who has starred in many of Murphy’s series, is one of the producers, along with Monica Lewinsky herself. Although she had an impossibly hard time during and after the scandal, Lewinsky found purpose as an anti-bullying advocate, and now as a show producer (Ryan Murphy said in the past that he wouldn’t do the show without her participation.) It’s based on the book, “A Vast Conspiracy: The Real Story of the Sex Scandal That Nearly Brought Down a President,” by Jeffrey Toobin (yes, the legal analyst who’s more recently known for the CNN Zoom Incident).

So far, all three of the “American Crime Story” series – “The People v. O.J. Simpson,” “The Assassination of Gianni Versace,” and now “Impeachment” – all take place in the ’90s, long ago enough that we may have forgotten all the details, but recent enough that many people remember following the stories when they happened. Because these stories were all such huge media frenzies also, many people know bits and pieces of the story, or they know some salacious details, but don’t know the bigger picture or may have forgotten big parts of the story. With past “American Crime Story” seasons, Ryan Murphy has been excellent at showing the humanity of the people we saw each night in news stories. Definitely, in the case of the Clinton/Lewinsky scandal, we know that many people got carried away with the juicy tidbits and with their own politics and lost sight of the fact that there were actual human beings at the center of the scandal.

“Impeachment” will premiere on FX at 10 p.m. on September 7. It’s been a long road – it was first announced that Murphy got the rights to Toobin’s book all the way back in 2017, but by 2018 he’d dropped the project. He picked it back up again the next year when Lewinsky agreed to participate…and then it was again delayed. People also criticized the timing of the premiere when it was scheduled for 2020, just before the election. Finally, after scheduling and COVID delays, the show is ready to air this fall.

While you’re waiting for the next season, this is a great time to go back and watch the excellent first installment, “The People v. O.J. Simpson.” The series does a wonderful job of casting – Cuba Gooding, Jr. plays O.J. David Schwimmer, who seemed like an odd choice at the time, has a wonderful performance as Robert Kardashian. Sarah Paulson brings humanity to Marcia Clark and shows the world what she had to deal with as a female lawyer under media scrutiny for her hair and her outfits as much as her work.

Season 2’s “The Assassination of Gianni Versace” is equally good, and those two shows won a combined 31 Emmys. That season stars Édgar Ramírez, Darren Criss, Ricky Martin, and Penélope Cruz and is based on the book, “Vulgar Favors: Andrew Cunanan, Gianni Versace, and the Largest Failed Manhunt in U.S. History” by Maureen Orth.