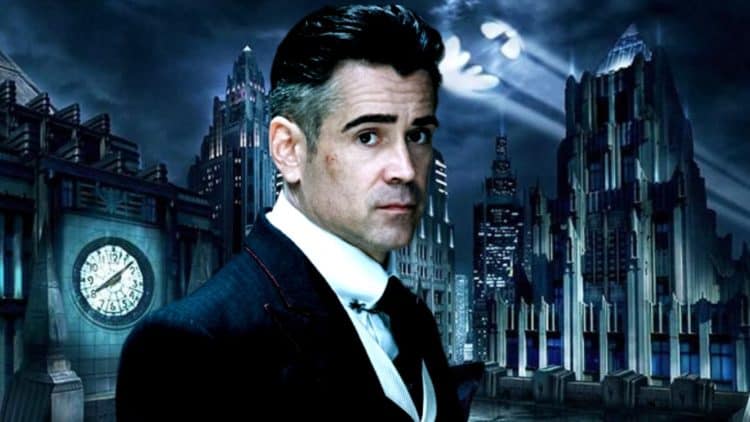 Colin Farrell, the Hollywood hunk from Ireland playing the short, obese, pointy-nosed villain known as The Penguin? Now that sounds hard to pull off. The last time we saw the character on the big-screen was in Tim Burton’s Batman Returns. And who played him? The four-foot-ten Danny DeVito, an actor who matched the character’s physical attributes much more closely than Farrell. What made DeVito’s version stand out was his grotesque appearance and apparent lack of humanity. In other words, he was the kind of character Burton would mold in his own image. It was a different take on The Penguin, but it was an interesting one, as he proved to be one sick-minded bird man. The most faithful aspect he carried from his comic counterpart was his sneaky trick umbrellas, which serves as his signature weapon. Burton’s Penguin was more of a legitimate freak than a human, that simple.

So why would Matt Reeves cast Colin Farrell, who is physically the exact opposite of DeVito? Reeves really hasn’t revealed any specific details on the plot or characters yet, but some set photos have been leaked. One of them contains a faint image of what appears to be Farrell in the full Penguin costume. He’s got very light hair, wearing a fancy suit, and most importantly, is carrying an umbrella. That’s all we have to go on so far, but it has been confirmed that he will be the film’s main antagonist. This means we’ll be getting a lot of Penguin and that also means the character has to be done right. Was Colin Farrell really the right choice for the role? Let’s do some digging.

The Penguin is one of Batman’s oldest foes, debuting in the early days of DC Comics. His real name is Oswald Chesterfield Cobblepot, and he best surmised as a “Gentleman of Crime.” He owns a nightclub in Gotham City called Iceberg Lounge which serves as a front for his criminal activities. For a comic book villain, he acts mostly as a mobster while wearing a monocle and a top hat. Pretty unique for a comic book villain, but what separates him from many other Batman villains is that he’s completely sane. The Penguin is a calm, but calculating criminal mastermind with a penchant for trick umbrellas. This makes him a one of a kind villain.

Since The Batman is going for a more grounded tone, having The Penguin as the man villain is the perfect fit. He has no powers, no strength-inducing venom, and no goofy costume. What more can we ask for? Well, that would be a great actor to make this character come to life. Reeve’s will take The Penguin in a vastly different direction than Burton did, giving him a more grounded look and backstory. He won’t be a man/penguin hybrid and he’ll probably be one hundred percent human. Will this serve Colin Farrell? The answer is most definitely yes.

Farrell is no stranger to playing violent, but pragmatic characters. It’s rare that he plays a villain, but he plays antiheroes to near perfection. While The Penguin is no antihero, his grip on his sanity gives him a rational edge. He’s perfectly capable of running a powerful criminal empire and his legitimate business allows him to avoid prosecution. When Batman wants to bring him down, he can’t just resort to using his fists. He must focus on using his skills as a detective to investigate Penguin’s criminal activities and collect enough evidence to prosecute him. In other words, he has to be fought like a regular crime lord and not a super villain. That makes him more interesting and it’s the kind of character Farrell can thrive on. A violent character that can control himself when needed because he understands that putting on a facade works.

When I think of Farrell playing The Penguin, I just can’t help but think of the Telltale Batman games. The Telltale version of The Penguin is farthest deviation from his comic counterpart, but in a good way. For starters, he’s not fat and not too short. He lacks any wacky, over-the-top trick umbrellas, but he has access to an army of goons and military grade technology. He’s got a cockney accent, along with a facetious attitude and bad guy charm to go along with it. What’s most impressive about this version is that he’s no pushover. Telltale’s Penguin is a tough, brutal fighter who can hold his own against Batman. Seriously, now that is something for a bad guy to brag about. The Telltale games displayed Penguin in a different kind of fashion while retaining some of his best qualities. It was different but it sure did work.

This is without a doubt the kind of Penguin we need to see from Colin Farrell. He doesn’t look anything like the comic version, but that honestly doesn’t matter. The Telltale version knew how to operate behind the scenes while appearing in the public eye as a wealthy gentleman. He used his cunning to slowly bring down Batman and attacked him where it hurt the most, making it a personal battle. Although he had many thugs under his command, he delighted in personally committing violence against anyone he wanted. Farrell can pull off all of these villainous traits, which would give us a version of Penguin vastly different from DeVito’s. He’s no freak, just a man with some serious violent tendencies and truck loads of money to back him up.

Oh, and let’s not forget about that accent. Farrell is a native of Ireland, but he can pull off accents brilliantly. Telltale’s Penguin and even the Arkham version had British accents, adding some quirkiness to their villainy. Allowing Farrell to show off his accent would only be the icing on the golden cake.

The most vital quality about The Penguin is that he is a mockery of what Bruce Wayne is on the social scene. Bruce Wayne is a handsome, legitimate businessman, while Penguin is an unattractive, greedy con man. They are two sides of the same coin. All of these traits is exactly what we need from Farrell to deliver a great Penguin. Given his past performances, I’d say the character is in great hands.