Home
Video Games
The Top Ten Terraria Weapons You Can Use 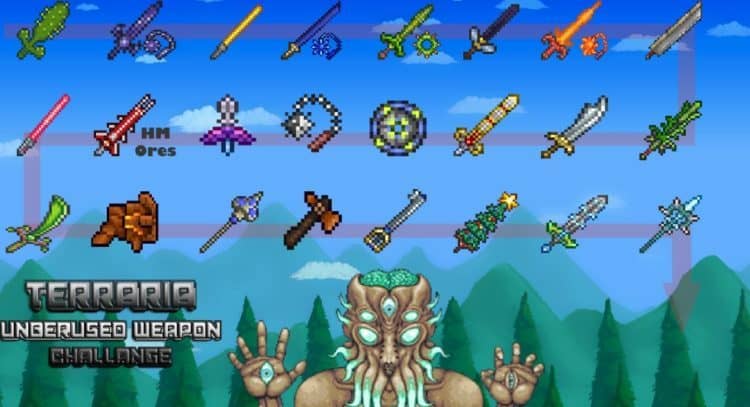 Terraria is a rather interesting example of a sandbox game from the action-adventure genre that is 2D rather than 3D in nature. As a result, it should come as no surprise to learn that Terraria bears more than a bit of resemblance to Metroidvania games, though it has significant differences as well, with an excellent example being how its world is generated via procedural generation. Regardless, since Terraria is an action-adventure game, this means that choosing the best weapon is one of the best parts.

Here are some of the best weapons that can be found in Terraria:

Daybreak is a melee weapon that can be hurled with incredible speed. In total, eight separate instances of Daybreak can be stuck onto a target, thus resulting in higher and higher amounts of damage being inflicted to it over time. On top of this, Daybreak lives up to its name by lighting up its surroundings, meaning that it can be useful for exploration purposes.

The Flairon is a hardmode flail that can be collected from Duke Fishron, who is perhaps unsurprisingly, one of the toughest bosses in the entire game. Said weapon is interesting in that it unleashes one homing bubble per 1/20th of a second for which it is extended, meaning that while its head possesses a mean punch, it can be beneficial to miss on purpose. As a result, the Flairon is one of the most popular weapons in the game for players who prefer melee.

Confusingly, the Horseman’s Blade comes from Pumpking rather than the Headless Horseman, though to be fair, its look should remind most people of pumpkins. Regardless, what is entertaining about the Horseman’s Blade is that it will summon homing pumpkin heads upon making contact, which can be very amusing when facing something with multiple segments.

The Influx Waver is a potential competitor for the Terra Blade in that it sacrifices speed for more power. Moreover, its projectile hits once and then proceeds to attack twice more from different directions, though it doesn’t penetrate in the same way as its rival sword.

When people want to bomb their enemies from up high, there is the Lunar Flare, which combines excellent accuracy with high damage as well as the ability to pass through blocks. As a result, it is one of the most powerful magical weapons in the game, though it has its competitors as well.

The Mushroom Spear isn’t the most damaging of the spears that can be found in the game. However, it has a curious effect in that its attacks leave spinning mushrooms hanging about in the air, which can inflict further damage upon the enemies that stumble into them.

When a player in Terraria needs an entire group of enemies to just vanish in a series of explosions, there are few choices that can match the Solar Eruption. Moreover, even if a hit with the Solar Eruption doesn’t actually kill the target, its Daybroken debuff will ensure that they will be feeling it for some time to come. With that said, while the Solar Eruption is great for fighting groups, it is less suitable for going one-on-one against strong enemies.

For a lot of people, the best approach to enemies is to hit them as hard as possible with a huge sword swung as fast as possible. If that is the case, the Terra Blade is an excellent choice, particularly since it comes with a neat distance attack that can penetrate a couple of enemies before dissipating upon striking a third. Toss in a high damage value and it is no coincidence that the Terra Blade is one of the most prized weapons in the game.

The True Night’s Edge is interesting in that it is a huge sword that hits hard while throwing out a spinning sword projectile for distance attacks. Unfortunately, it doesn’t actually get that much attention because it is one of the items needed to make the Terra Blade, which is much more of a stand-out weapon.

Vampire Knives are exactly what they sound like, which is to say, throwing knives that suck out the life of enemies for the purpose of healing the player. Combined with the fact that they spread, they are quite useful for keeping the player’s health topped up.