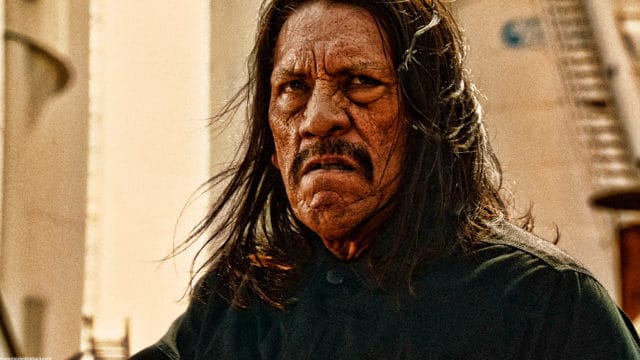 Danny Trejo just LOOKS like he’d be tough. According to rumors and his bio he’s had a troubled past and been in and out of jail since he was a young man. Obviously, and thankfully, he managed to straighten out and came on the scene as one of the baddest-looking actors you’d probably ever seen. Just his frown was scary when he looked at someone with utter contempt. He’s never seemed like the kind of guy you’d want to mess with even in real life since just taking one look would convince you that he’s not going to go easy on you if you give him too much lip. But from all reports he’s actually a nice guy off screen. It’s when his scowl comes into play that you might want to take a few steps back.

Here’s just a few roles you might recognize him in.

This is one of the only movies I think I’ve seen where Trejo’s character actually doesn’t want to fight. He’s all about minding his own business and going about his own way, but people never seem to let him do that. It’s not much of surprise when someone gets harangued often enough or threatened that they would finally stand up and let their aggressor have it.

He’s quiet, he’s deadly, but he’s limited in this kind of fight where firearms tend to rule the day. Throwing knives are great for when you’re trying to get in, kill the target, and then get out, but they seem a little outmatched by automatic weapons that don’t require the same kind of precision. Just press the trigger and spray, hoping you’ll hit the guy, versus having to really take aim and know what you’re doing, yeah, Trejo was kind of outmatched.

3. From Dusk Till Dawn-Razor Charlie

This role is great because he pops up in just about every one of the Dusk till Dawn movies as the same character. That kind of makes it confusing to understand the timeline unless you happen to pay close attention to see whether or not the Gecko brothers are mentioned somewhere in the sequels so as to give a better assessment of just where the original movie falls.

He didn’t have many lines in this movie and that made it all the better. Trejo was supposed to be a stone-faced killer and that worked out pretty well. Even better though, and something I enjoyed immensely, is the fact that when he was looking for his target and Chow Yun Fat found him first and placed a gun to the back of his head, Trejo’s character smiled, accepting his fate by acknowledging that he’d been outplayed.

This was just crazy all the way around. Machete is so over the top awesome that he’s able to do almost anything and eventually inspire anyone that comes within his orbit to fight the eventual battle with nothing less than everything they have, which is a considerable amount. The film after this got a little more crazy and a little more out there, but this one was a definite must-see.

He didn’t get a reputation by accident.