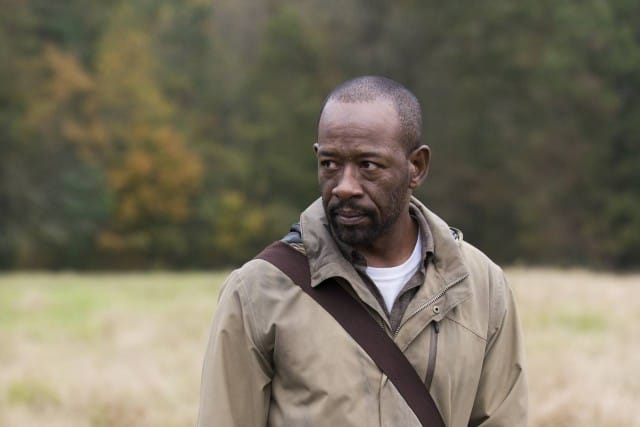 For just a moment, let’s cling onto the two minutes or so of The Walking Dead where the show doesn’t feel like its flailing at emotional beats, or openly machinating its characters into position for the already-advertised-as-shocking finale. I’m talking about Rick and Morgan, alone in the woods, discussing the enigma of nature’s cyclical balance of life and death, the one moment where it feels like “East” has its fingers on something tangible and meaningful. For a brief moment, Rick’s dead stare dissipates, and him and Morgan have an actual conversation about their fragile mortality, Morgan tracing the path of the rogue Wolf he tried to “convert”, and how he played his own role in saving Carl’s life. Set outside a zombie-infested farmhouse, the philosophic debate inspired by the maybe-Savior running away from our sad, sweaty protagonists is as strong a moment as The Walking Dead‘s offered in its tumultuous, disappointing sixth season – unfortunately, it’s buried underneath one of the show’s most laughably implausible episodes.

Opening with a montage of Carol v Carol: Dawn of Nancy from Montclair, “East” almost immediately throws itself headfirst into ridiculous waters when half the major characters of the show pair off to find Carol, all at different times, and eventually isolated by different idiotic decisions. It’s a chain of idiocy that begins with Carol’s sudden turn into a Christian who cries every time she murders a group of people (a centerpiece in the Morgan/Rick debate the show hasn’t taken the time to develop), and continues as Daryl decides he’s a one-man wrecking crew, followed by Glenn/Michonne/Rosita and Rick/Morgan… while ALL of them are talking about how the Saviors are about to attack Alexandria, no less. Great idea!

A messy structure robs these developments of any coherent progression, too: after flashing back from the opening sequence, the first act focuses solely on Carol, then flashes back again to when everyone in Alexndria decided to leave. Forget the lack of coherency: it all overtly feels like The Walking Dead placing its characters on an assembly line, neatly organizing them and turning them into a group of completely deaf people, separated by their irrational decisions to split up into pairs while groups of people are inevitably hunting them down. Once Carol gets her pre-designated cliffhanger, “East” moves hurriedly from location to location (with absolutely no sense of geography; where is the road in relation to the tracks?) watching members of The Savior Foot Clan sneak up and surprise each and every one of them (save for Rick and Morgan, who sweat and walk a lot) – and it all feels so systematic, so absent of creative freedom, none of its attempts at dramatic crescendos really hit home.

I can empathize with Daryl’s sense of failure this season: but the idea it would push him to such compulsively stupid behavior is ridiculous. Same follows for how so many characters follow suit, without anyone raising any kind of hesitation about the idea: even though everyone knows the sh*t is going to hit the fan, everybody’s completely fine with splitting up and fracturing the security detail of the entire compound (don’t even get me started on Maggie letting Enid take a shift on watch). After carefully crafting this thematic material about the morality of building civilization admist a world of chaos, the internal explorations of previous episodes this half-season have given way  to a lot of plot-serving nonsense, reducing “East” to a confusing portrayal of how a bunch of people walked into a series of obvious traps set by the Saviors.

Now, let’s talk about the ending: The Walking Dead‘s had an obvious problem with life-threatening cliffhangers in recent memory: Carol (who gives Tobin the Boring one last round of nookie before slipping away in the night), Carl, Glenn, and now Daryl have all shed blood before disappearing off screen, all in increasingly egregious fashion. How this episode ends is about as desperate as a television episode can end, the screen cutting to black as Daryl’s blood hits the lens, complete with the lip service voice over by Dwight ensuring that “he’ll be alright”. It is abundantly obvious Daryl was shot in the shoulder in that moment (at least, it seems the logical answer; then again, logic is not a friend of TWD), why the episode had to end like that is an absolute mystery: given that the show was teasing where this was all heading back in September, throwing unnecessary cliffhangers at the audience becomes a self-serving exercise, one that feels constructed to cover up for the show’s hollow portrayal of character, world, and narrative, with a “shocking” moment that will light social media on fire for a few hours while everyone panics and scrambles for SEO-friendly articles teasing the finale.

But most of all, “East” is an absolute bummer because it sells its characters and thematic explorations out in service of yet another Serious Antagonist: it seems lost on The Walking Dead this is the first episode all season Rick hasn’t been covered in someone’s blood, a development that would seem to be pretty monumental given how things have gone. Instead, we get his foray into food porn with Michonne (or at least, his attempt), and The Walking Dead painstaking placing its dominoes to fall when Negan makes his unsurprising arrival next week (did you hear Jeffrey Dean Morgan was playing him? No way!), regardless of how illogical its machinations to do so are. Save for that one sequence with Morgan and Rick (which basically ends with Rick winning the ideological debate, when Morgan takes the gun he’s offered), “East” is a mess of unbelievable twists, unsatisfying dramatic rises, and a series of increasingly awkward, stumbling cliffhangers to set the stage for “Last Day on Earth”, the ever-so-evocatively named finale.

A series of unsatisfying dramatic moments and unnecessary cliffhangers mark a disappointing penultimate episode of The Walking Dead. 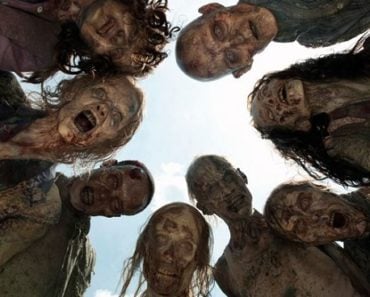 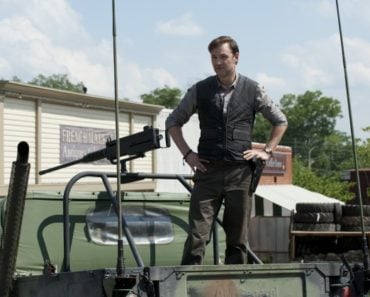 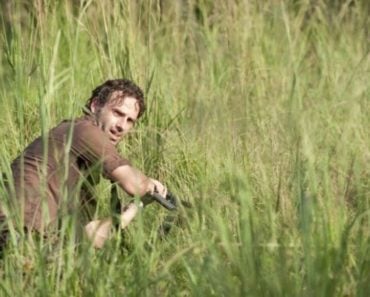 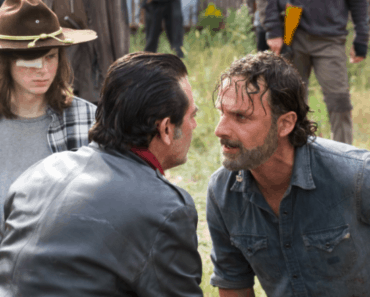 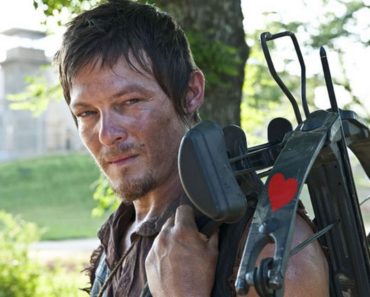