Home
Television
The Scotsman Really Needs His Own Series 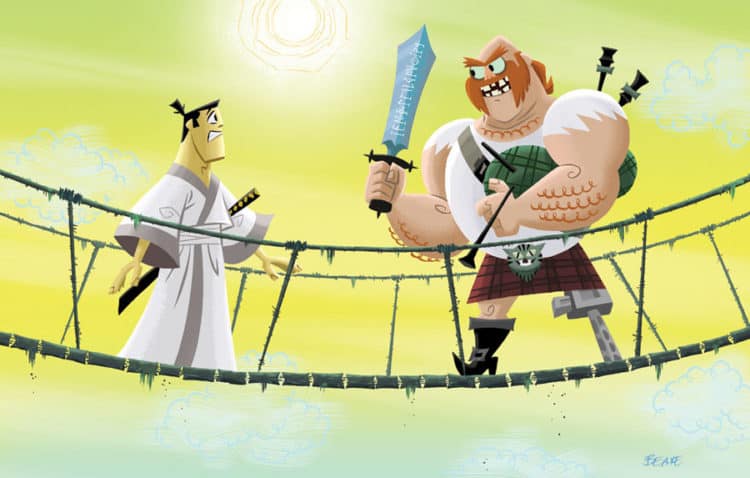 If you grew up in the early 2000’s, you’ll remember Samurai Jack. You’ll also remember his eccentric buddy, the Scotsman. Oh boy, this character was quite the polar opposite of the quiet and collected Samurai Jack. They met in the earlier episodes of the first season and had a rather contentious interaction on a very sturdy bridge. When the titular hero was attempting to cross, he heard the irritating noises of the Scotsman’s bagpipes in the distance. Okay, I must confess, I enjoy the bagpipes. Why did so many characters feel so much pain by the very music of his bagpipes? Heck, he even used them to free Samurai Jack from the control of a siren. If it wasn’t for him and his bagpipes, our hero never would have completed his journey. Just think about that. I’m going to go even farther and say that the Scotsman should actually get his own series. Now that Samurai Jack’s story ended in 2017, I think now’s the time for another character to take the spotlight. I don’t think the creators should just move on from this world, because it’s just such a vast and creative world. I mean, it’s literally filled with the most exotic and outlandish creatures. It’s got killer robots that dress like cowboys, sea creatures with a society deep below the ocean, and even talking dogs with accents. What doesn’t it have? Very big wooly mammoth-like creatures that can stand on two legs? Oh, they have those too. How about a James Bond-like fellow with a briefcase that is a single gadget capable of doing a lot of things? That’s there too and he tried to steal something from an Egyptian pyramid.

If you think that’s outlandish, try the three hundred Spartans, except they have more futuristic technology to fight hostile machines. I mean, they have spears that shoot missiles. How freaking crazy is that? With all of this crazy fantasy or science fiction style stuff that is rife in the world of Samurai Jack, it’s not too hard to accept a tall Scotsman who loves to play the bagpipes. Oh, and we should probably point out that the Scotsman has one leg, but he walks around with a fake one. Make no mistake, it’s no ordinary fake leg. What he uses as a fake leg to help him walk is actually a mini machine gun. All he has to do is lift it up and fire away. Oh yes, the Scotsman is one wild character. If that’s not enough to convince you, go back and watch the episode where he asks Jack to help him rescue his wife from monsters. A little spoiler alert: his wife is a very big and very obnoxious Scottish woman. If you make her aware of her size, she will enter a berserker state and literally tear through everything in her sights. The Scotsman is aware of this, but he still loves her for it. It’s a very dysfunctional relationship, but seeing them together is honestly very funny to watch.

In the final season of Samurai Jack where fifty years passed, we got to see an aging Scotsman confined to a wheelchair. That didn’t really slow him down, however, because he still had his magic sword and his machine gun leg. Oh, and he had a small army of his very strong daughters backing him. Seeing him trying to “discipline” his one daughter for the way she dresses (even though she was in her armor) was a hoot. That’s just the very nature of the Scotsman and even after he was killed by Aku, he returned as a ghost. Before Samurai Jack returned to his own time, he and the Scotsman managed to have one final back-and-forth playful banter. That’s really the last we’ve seen of the Scotsman in Samurai Jack. In my opinion, I think we should’ve seen more of him. He’s truly a hilarious character with a lot to offer and focusing on him is an opportunity to explore the world more. When will it be set? Whenever he wasn’t tagging along with Samurai Jack. How about show us more of him with his wife just bickering? That’s a cartoon comedy in the works, but with that large and obnoxious woman, he had many children with. That can be another main storyline that can be worked with for a series for the Scotsman.

I think what would make a series for this character work so well is just the fact that he’s so outlandish. There’s a lot you can do with the very backstory and setting of the Scotsman, especially since he’s the opposite of Samurai Jack. How did the Scotsman train? How did he lose his leg? Where did he meet his wife? And during the fifty year time period when he wasn’t hacking robots with Jack, how did he raise all of his daughters. It took him all fifty years to bear all of those children, but his wife was nowhere to be found in the final season. That’s not good news and we can assume that she probably passed. If not, then she was killed by one of Aku’s minions. That would leave the Scotsman to raise all of his daughters on his own. Well, unless you want to count his clansmen. That’s another thing I’d want to see in a Scotsman series. He took Jack to his castle to introduce him to his equally wild clan. I would like to see how the Scotsman became so popular with this clan and why they respect him so much.

He had to of spent some time fighting to establish his manhood among the clan and I’m sure there are many fights to see. Oh, I am very interested in this and unlike Samurai Jack, the adventures of the Scotsman can amp up the comedic aspect. With his overwhelming size and broadsword, he can have some very cool action moments. Now that Samurai Jack is done, the Scotsman is the guy to carry on that legacy. He was his best bud in that world and added some unexpected humor to Jack’s journey. And yes, more of those bagpipes, please.