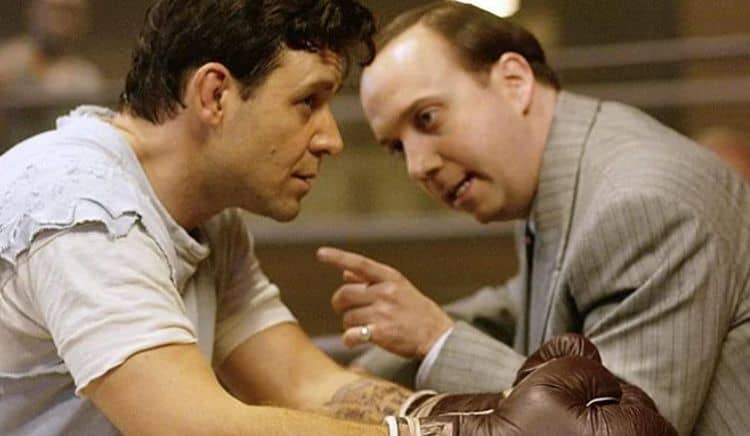 It’s usually not wise to make promises that are so grandiose that keeping them is nearly impossible, but thankfully Russell Crowe was able to make good on the promise he made to Paul Giamatti’s dying mother when he promised her that Paul would be nominated for an Academy Award. This was Russell’s way of paying things forward since Al Pacino did the same for him after the two starred in the movie The Insider, and beyond all belief when Crowe asked for Paul to be pushed for a nomination it happened. To be certain though, Paul earned the nomination in a big way since his portrayal as Joe Gould, the manager of James J. Braddock from Cinderella Man, was nothing short of excellent. He played a character that was a slick and very smooth talker and at times kind of hustled his way through life, but had a heart of gold and genuinely cared about his fighter. There were times in the movie when one couldn’t help but wonder why Gould was a necessary character, but thankfully it was easy to remember in the next second since he would pipe up with something that would remind the audience that he had Braddock’s best interests at heart. But he was a huckster, an agent, and a manager, and he had a gift of gab that managed to open doors as much as Braddock’s talent did.

The story of Cinderella Man was one of inspiration that showed the comeback of James J. Braddock, a boxer that a lot of people felt was too old and too used up to ever be any good in the ring again. During the Great Depression, however, when he couldn’t find work and things were tough all over, Braddock eventually went back to the ring for what was supposed to be a one-time-only fight and ended up making a comeback to the sport that has been echoing throughout history ever since. A lot of people have forgotten this story as boxing has moved on in big ways obviously, but reading the histories of the great fighters and the inspirational fights that they had to take on is still pretty interesting. What’s also interesting is that the antagonist of the movie, Max Baer, wasn’t exactly given a fair portrayal as it’s been revealed more than once since the movie released that Baer wasn’t a villainous boxer and he didn’t try to kill people in the ring. In fact, there are accounts of Baer actually breaking down crying when men he’d fought passed away due to the damage they’d taken, so it’s more than fair to say that Cinderella Man vilified a great fighter that wasn’t nearly as vicious as he was made out to be. But one thing they did get right is that Baer was an absolute beast in the ring since he could deliver a right hand and club someone around the ring like no one else could in his time. But much as it was in the movie, his loss to Braddock came because he didn’t take the fight seriously and underestimated Braddock in a big way.

Paul Giamatti‘s role in the movie however was an inspiration that really took on a life of its own since he became the heart and soul of the picture while Crowe’s version of Braddock was the guts and the determination. But to think that procuring an Oscar nomination is that easy is kind of an iffy prospect since to be fair a lot of people tend to vie for this award every year, and thinking that all it takes is a suggestion in the right ear is kind of disquieting really. Again, Paul earned the spot without any doubt, but better he earns it than anyone having to mention that he should get it since his costar had to mention it to keep a promise. Keeping a promise is an important thing after all, but there are times when a person should think about what they’re trying to make happen and wonder if it can be done without going toat far in the first place. Since the movie, both men have gone on to have even more success and while they’ve had their share of movies that have been less than successful as well they’ve both become screen legends in their own time since their talents are hard to deny considering how many roles both men have played and in what types of movies. It is touching that Russell made such a promise and managed to keep it, but again, it’s something that might make a lot of people look askance at the actor if only because it was something that needed a bit of help in the end and didn’t come as naturally as it probably should have.