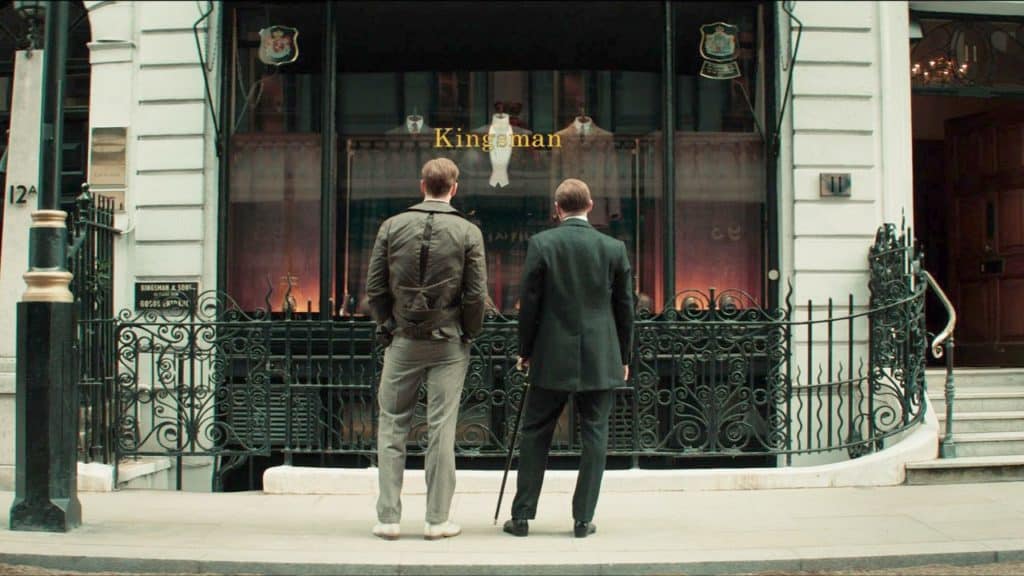 When the first Kingsman movie, subtitled The Secret Service, hit theaters in 2014, it arrived as an utter revelation for the beleaguered and increasingly tired-feeling action franchise.  Dating all the way back to The Matrix (1999), mainstream action movies had become overly sleek, high-concept and largely pared-down affairs, with practical sets and pyrotechnics giving rise to non-tactile spectacle of CGI and, thanks to The Bourne Ultimatum (2007), elaborate fight choreography giving way to shakey cinematography that obscured any sense we had of the brush-ups happening on-screen.  This was pre-Deadpool (2016), when studios fully realized that there was sizable portion of moviegoers hungry for R-rated blow-outs, and furthermore well into the age of Marvel, when superhero movies utterly dominated the action scene.

Compared to the kinds of movies coming out around it, Kingsman stood apart from the crowd.  It was a hard-R, oftentimes raunchy send-up of old spy movies: not the Jason Bournes and the Ethan Hunts of the world, but the suave, decked-out, retro James Bonds — the Sean Connerys and Roger Moores of the franchise, mind you, not the more rough-and-tumble Daniel Craigs of recent years.  It made the most out of its R-rating too, pushing its already considerable body-count to the extremes of good taste with kill after gruesome, bloody, kill, culminating in an all-timer of an action set-piece in which Samuel L. Jackson’s supervillainous Richmond Valentine — a grotesque parody of crass American businessmen (intentionally caste in the mold of Steve Jobs, but now-a-days can’t help to be seen as a sort of McDonald Trump) — brainwashes our debonair, superspy hero to slaughter a hyper-bigoted church congregation in the most protracted, brutal and viscerally satisfying way imaginable.

Its elevated premise, cheeky sense of humor and bombastic action sensibilities elevated it far and away above the likes of the down-and-dour early DCU movies, cotton candy lightness of the earlier MCU movies and the try-hard efforts of everything else.  Think of it like a sort of proto-Deadpool — or of a higher-profile successor to something like Super (2011) — altogether like nothing we had seen, if not before, than at least in a good long while.  And even if the sequel did no more than replay the greatest hits of its predecessor and introduce an equally-fun spin-off organization, well, the first movie was so good on its own merits that that was ultimately enough.

Now, going on three years after The Golden Circle (2017), we’re getting the third, and perhaps final, installment into the Kingsman saga: The King’s Man.  And now that the movie’s first trailer dropped, I can safely say that I’m so very, very tired of this franchise and would very much love nothing more than for everybody involved — all highly talented individuals by every account — to move on to bigger and better things.

Rather than a continuation of franchise front man Eggsy’s story — balancing work and home life as part of a reconstituted Kingsman that’s brought on one of its Statesman cousin’s as an “exchange student” of sort (Channing Tatum’s pitch-perfect Agent Tequila), what we get is a seemingly grim-and-gritty prequel that turns the clock all the way back to the early days of the Kingsman organization at dawn of the previous century.  We get a new young recruit who looks to be repeating Eggsy’s slob-to-snob coming of age story from the first movie, only in a stripped-down period setting that comes apparently bereft of the trademark, over-the-top humor that has demarcated the franchise’s first two movies.  Seriously, this looks positively bleak where the first film especially felt fun, colorful and irreverent.  It’s like the franchise looked at Batman v Superman (2016) and figured that THAT was the new direction that the franchise should be going in.

I’m honestly at a loss here, Guys.  Matthew Vaughn is an immensely talented director.  Jane Goldman is an immensely talented writer.  Their unique, juvenile, concussive collaborations have given us everything from Kick-Ass (2010) to X-Men: First Class (2011) to, well, the first two Kingsman movies.  They clearly have a lot to say and one would expect, judging by their repeated pairing, have yet to leave absolutely everything on the table.  So why this black-hearted third installment in this franchise?  Why a soft-reboot of the entire series?  Why remove it from its present setting, cut-down on the interesting rival spy organizations and sci-fi-adjacent gadgetry and Grand Guignol-esque gore and raunchy humor that have been mainstays since the beginning?

I just don’t get it.  But if this is what these two have to offer us now, with this concept and these characters, let’s hope that they’ve finally run the course with Kingsman and will soon find better things to occupy their time with.  Because this movie?  This movie looks boring: a tired, pretentious-feeling, overly-serious, unfun, performatively “adult” kind of movie that even the DC movies aren’t trying to be anymore.  Maybe the first non-teaser trailer will turn this perception around, but I kind of doubt it.  Selling us on the movie, especially the third movie in an incredibly popular blockbuster franchise, is kind of the point of these things, and so far it’s failed spectacularly.