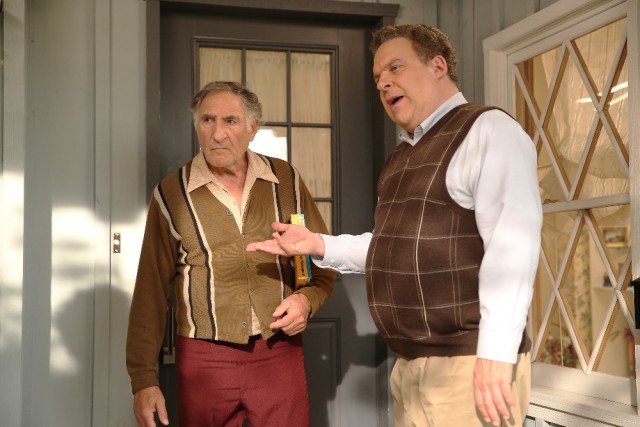 I’ll admit it: I’m a sucker for holiday-themed episodes on television, and I’m a sucker for The Goldbergs. Combining those two things have often been a recipe for success in the past, so let’s take a look at this week’s Thanksgiving episode of the series, “In Conclusion, Thanksgiving.”

The main thing going on in this episode, of course, is the family Thanksgiving. Beverly has decided that this year will be the one that has Murray’s dad finally come over for the holiday dinner. Surprisingly, though, this isn’t because she wants his dad to share in the holiday — it’s to prove to him that she’s a good cook (after a bad time the last time he had her food). Adam, at the same time, realizes that he can use “Cat’s in the Cradle” to manipulate Murray in order to get things he wants, so he obviously wants to use this knowledge to his advantage. When Beverly finds out about this, though, she makes Adam use the song to convince Murray to invite his dad over. Murray does, of course, but Marvin pulls a reversal and un-invites their father before dinner. Not giving in, Murray leaves the house to go get his dad. The whole family finally gets together, and each member of the patriarch’s family realizes that they have very different thoughts on the meaning of that song. The ensuing argument leads to Murray throwing his back out, and Marvin (now trying to be a chiropractor) has to come to his brother’s rescue. The family ends up coming together to share a great holiday together.

Elsewhere, but keeping with the holiday spirit, Pops wants to pass down the Thanksgiving toast to the next generation. He picks Erica, as he thinks she’s the best option to continue the tradition, but Barry decides that he wants a shot at it, too. Barry isn’t that good with words, as we’ve learned, so he gets some advice from his uncle for how to make things better. When it comes time for the toast, Barry goes all out with his presentation to deliver one of the most intense toasts in the history of the holiday. The family ends up absolutely loving the toast, and Erica is forced to rework her attempt before it’s time to give it. She finally tries to copy Barry’s style, but things completely fall apart. In the end, Erica gives the most appropriate toast that this family has ever seen.

I can’t remember the last episode of The Goldbergs that I didn’t enjoy, but “In Conclusion, Thanksgiving” really worked on every level. This is exactly what a Thanksgiving episode of a sitcom needs to be. It hit every clichÃ© and trope in the world, but it did it with a heart and style that few other shows can do.

What did you think of “In Conclusion, Thanksgiving”? Aside from The Goldbergs, what are some of your favorite holiday episodes of a TV show? Let us know in the comments down below!