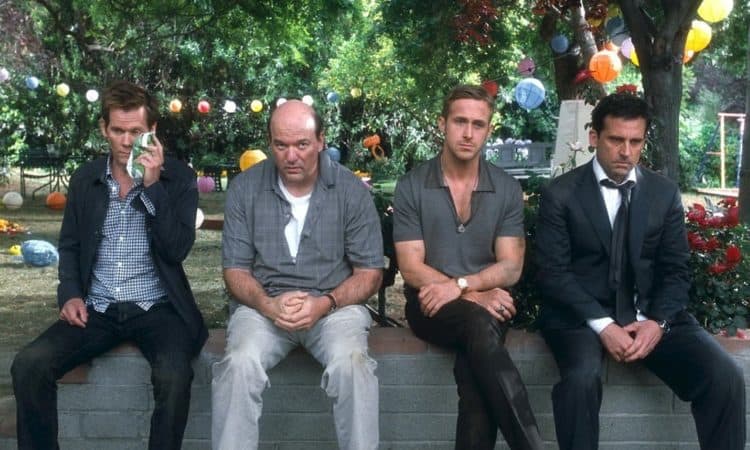 Steve Carell is one of those actors you expect to be funny all the time but the trick is that he’s pretty good at drama too and has proven it throughout the years following some of his best comedic moments. The fact that he simply looks like someone that should be doing comedy all the time is kind of irrelevant since in just about every movie he’s ever made there’s been at least some drama that has involved him and at least one other person. Those movies that have been nothing but drama have shown how much talent he really has and have turned people’s minds around when it comes to his limitations, making them realize that he has very few in terms of acting. He’s always going to be the short, dark-haired guy that you think is good for a laugh or three, but he’s also the guy that can get serious when he needs to.

This whole movie is just one giant case of mistaken identity that turns out to be a giant mistake on the part of Carell and Tina Fey, who play a married couple that are trying to find a way to bring the life back to their marriage. By taking a date night they finally do this and at the same time they take a reservation at a swanky restaurant that was in the name of two individuals that are wanted by corrupt cops and a crime boss that are entirely too aggressive for anyone’s liking. Throughout the rest of the night they have to do whatever it takes to stay alive and get the matter resolved, and it turns out to be pretty funny.

This is actually one of his most powerful but also one of his most depressing movies since it’s the kind of role that makes a person’s career in one hand and also shocks their fans in the other. Carell is a funny man, there’s no doubt of it, but the performance he puts in here leaves people thinking that there’s not a lot that he can’t do since it’s so convincing as to be a revelation to many that it’s actually him. He’s set up with a great cast and a true story, more or less, and he plays it off so great that one might have to watch it again just to convince themselves that it is in fact Steve Carell in the film.

Marriage movies seem to be one of Steve’s things since he’s made a few of them that have to deal with the bonds of holy matrimony in some way. But this movie also highlights what it means to be blindsided by the fact that your marriage is anything but perfect and will take some work to keep at times. On top of that is the fact that the guy he’s getting dating tips from is trying to date his daughter, the daughter of one of his neighbors is taking naked pics to give to him, and the guy that his wife cheated on him with is firmly convinced that their marriage is over, at least for the most part. Ah, it’s a fine mess.

So honestly this is more of a Jim Carrey movie since he plays the titular character, but Evan Baxter was a funny part of the film and this scene deserved some attention. Besides that, Evan Almighty kind of flopped since it didn’t have the same ‘oomph’ that the first movie did and regardless of having a former Gilmore Girl playing his wife and a decent cast to back him up, the film kind of went nowhere. But his inclusion in this film was funny since he was continuously at odds until the last part of the movie with Bruce and kind of paid for it in this scene and in a deleted scene that didn’t make the cut.

This is Steve at his best since it features him in way that you might not expect and rides that idea throughout the whole movie. Being a virgin as a guy isn’t something to be embarrassed by but obviously not every guy feels that way since his coworkers tend to give him a bunch of grief for the fact that he’s 40 and has never been with a woman. He’s interested of course, but he’s the type of guy that needs to find the right woman instead of just hopping in the sack with anyone. But when he finds the right woman the inexperience becomes fear and the fear becomes something akin to an awkwardness that not even teenage boys seem to feel any longer. And of course the ridicule ensues.

He is insanely funny but he’s also a great actor, something he doesn’t get enough credit for sometimes.