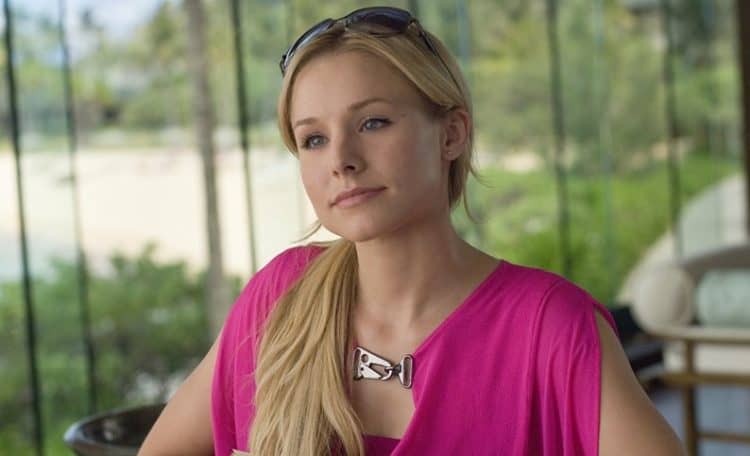 Sometimes it’s hard to see Kristen Bell as anything but the good girl, but she’s played someone that’s not quite so naive and has been anything but good before. But something about her just seems to say that she’s bound to be the protagonist more than the antagonist in whatever she plays, a telltale look that she has that seems to almost scream “good”. Throughout her career though she’s exercised a ranger of characters that has managed to elevate her status in show business in a way that has made it clear that she’s not bound to one role or another, but can consciously and faithfully create characters that are either widely loved or almost universally hated as it’s needed for whatever movie she’s starring in. The kind of talent she possesses is hard to deny, especially since it’s helped to create a career that she should be quite proud of.

Here are five of her best movies to date.

This movie feels like it should have gained a little more respect seeing as how people are completely hooked on electronics these days and the fact that the ghosts are drawn to anything with a frequency that can allow them to enter into this world. When you think about it most people can’t survive without electronics of some sort as they pervade our work, our home life, and just about every aspect of our lives on a day to day basis. While it’s nice to unplug and get away from our devices now and again it’s obvious that some people might suffer withdrawals or even shut down entirely if they had to go without them for more than a day.

It’s interesting how inept people are at realizing when they’re in a less than satisfying relationship isn’t it? Peter and Sarah’s split was probably the best thing that could have happened to Peter since eventually he comes to realize that they weren’t that great together. But when she decides that she misses him and tries to make her current boyfriend jealous she gets the short end of the stick when the new beau blows her off and then Peter does as well when she wants to rekindle their relationship. At this point Peter realized he was more in love with Rachel than he’d ever been with Sarah.

Anna is that fiery-tempered but extremely naive young woman that thinks she knows the world after having been out in for a few moments. What she lacks in knowledge and wisdom however she more than makes up for in enthusiasm and the incessant need to see the best in people no matter if they’re determined to brush her off. That could be why it was so easy for Hans to gain her trust and why she eventually won Kristoff over. It’s funny, but the guy she wanted turned out to be a total jerk and the guy that wanted nothing to do with her initially is the one that she ended up falling in love with.

Fanboys is just what it sounds like, though in a fun way. When a group of friends decide to infiltrate the Skywalker Ranch they embark on an adventure that’s nothing short of hilarious and in some ways kind of cringe-worthy since the idea of anyone that’s so dedicated to Star Wars but not the careful planning it would take to actually get in and out such a location. Nevertheless they do try and when they finally achieve their goal only one of them gets to experience The Phantom Menace before anyone else. But of course the others are still in line by the end of the movie to see it for themselves.

Let’s be honest, a lot of people expect a lot of things from moms. Dads are becoming a bigger part of this equation as time goes on but moms are still the ones that seem to be expected, at times, to know everything and to be the experts when it comes to just about anything. Kiki however is probably the most hopeless mom in this movie since she has a mess of kids and almost no control within her own house. Thankfully that changes throughout the movie since she and her two friends decide to take their lives back and become bad moms, women that still love their kids but aren’t going to be used as doormats any longer. Admit it, if your mom acted like this you’d be impressed and perhaps just a little disturbed since a lot of women don’t go to these measures.

Kristen is definitely one of those women that can do a great number of things and be just as impressive at one as she is at the other. There’s no doubt why she’s been so popular for years.