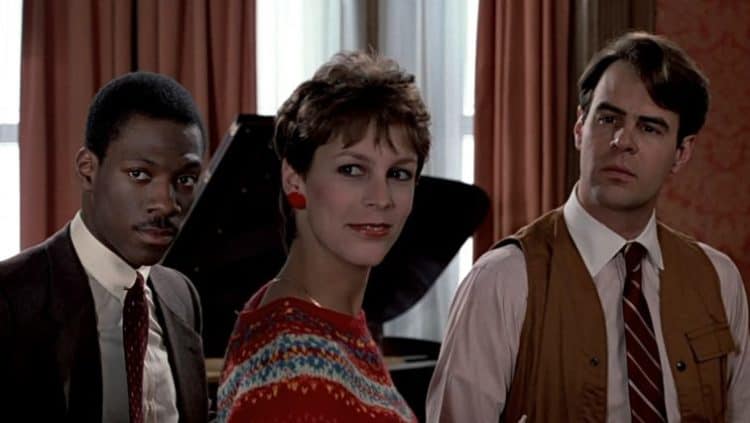 Eddie Murphy has had quite the range when it comes to acting for some time. In fact he was one of the main reasons why SNL didn’t up and go off the air at one point since his acting and his comedy was so on point then and it still is now. He’s become much more of a family-oriented actor at this point in his career but he’s still got the kind of talent that’s needed when it comes to entertaining the audience. If anyone remembers, and a lot of us should, his stand-up routine used to be one of the most profanity-laced bits ever, but it was still insanely funny and had the ability to make people forget that he swore every other word sometimes. He’s simply the kind of guy that can make you laugh uproariously throughout any movie he’s in even if he has to throw some drama at you from time to time.

This is proof in a way that Eddie’s characters don’t often take things seriously since Chandler thinks the whole quest is kind of a joke up until he starts seeing things as they really are and starts to wise up to the fact that he’s in a very serious race against time to find the Golden Child and keep the bad guys from getting what they want. While it does deal with racial stereotypes that today might be frowned upon this is still a great movie since it shows Eddie Murphy during the height of his popularity and before he started going completely towards family movies.

Being honest, people probably remember the dinner scenes a lot more when it comes to this movie than anything else since this is where the bulk of the comedy came in and just kind of overtook the rest of it. The touching nature of the film was kind of overwhelmed by the fact that a lot if it was fart jokes and stereotypes that seriously offends some folks and doesn’t faze others in the least. After all it is a movie and it is supposed to be for entertainment value, not for a serious discussion of how different lifestyles and attitudes might be harmful to those around us. If you can’t turn off your brain for a movie for two hours then it’s best not to go.

Eddie has worked with a lot of stereotypes in his movies and has rubbed a lot of people the wrong way it seems, but his comedy is just too funny to deny since he’s the kind of guy that won’t be ashamed of what he’s doing and will go full speed ahead when it comes to his roles. In this film he plays a prince that wants to come to America to see what it’s like to finally live his own life without everyone trying to tell him what to do and what’s expected of him. It might be one thing to have royal attendants bathe you, but not being able to go to the bathroom on your own might be stretching it.

From rags to riches is one thing when you earn your way up, but when you’re used as a pawn to test the validity of human nature and what will go down when you’re given no choice in how your fortunes will turn out it could anger a few people. But then again Valentine and Winthorpe do a pretty good job of getting back at the Duke brothers while making themselves rich beyond their wildest dreams. Plus they both seem to end happy at the end with a woman at their side. Heck even the butler, Coleman, is well off by the end of the movie and he starts out as a servant that has to put up with more than many people would want to endure.

Foley is one of Eddie’s greatest characters of all time without argument since he’s funny, smart, and has the kind of attitude that gets him into and out of just about anything one can imagine, with some exceptions. Plus his character is so out of place in Beverly Hills that he’s bound to stand out wherever he goes, at least until he starts up with his routine and making friends along the way. The sequels weren’t horrible but they definitely weren’t on par with the original since the first movie was something that no one was expecting and was great because it had never been seen before.

Apart from movies Eddie’s time on SNL was awesome as well. Drama is something he’s done almost as a byproduct it seems since his comedy is always right there and ready to be utilized.