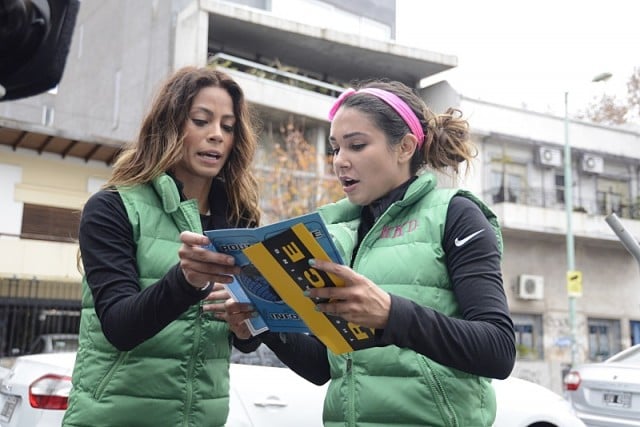 After a strong premiere last week, The Amazing Race returned Friday night with an interesting episode that clearly drew the lines between certain teams, establishing favorites and least favorites very early on in the race. While some teams seem open to working with others, there is one team in particular that perhaps unknowingly has been alienating everyone else. While making allies may not be as important on the race as it is on other reality shows, there is something to be said for not angering the other teams. With express passes and U-Turns always in play, sometimes it helps to give other teams a good first impression of you. Instead, super fans Justin and Diana rubbed teams the wrong way multiple times throughout the episode, making quick enemies and putting a huge target on their backs.

When the leg started out, teams all landed on the same plane to Buenos Aires, Argentina, tasked with finding out the church where Pope Francis was baptized, as this would be their first destination. Many teams took to asking people at the airport if they could borrow their phone, Googling the answer before they left. This is the technique that the mother/son team of Denise and James Earl used and then shared with Justin and Diana. The two teams decided not to share the information with anyone else but immediately after, Denise and James went and told a few other teams, including the bros, Tanner and Josh. Noticeably annoyed, Justin confronted them about this in front of the other teams, ultimately making himself look bad. While Denise and James Earl were trying to earn the trust and friendship of other teams, Justin went and further alienated himself and Diana.

Once they got to Buenos Aires, the teams all made it to the church, being allowed to enter the next morning and getting their first clue in the order that they arrived there.  In the Detour, the teams must choose between collecting cardboard and helping with the recycling efforts in Argentina or dismantling a statue, transporting it to a part, and putting it back together without breaking it. All of the teams except TV reporters Kelsey and Joey choose to collect cardboard boxes.

With a feud already developing between them, Justin and Diana and Tanner and Josh were neck to neck as frontrunners in the Detour. Justin’s obnoxious attitude and inability to stay quiet has already frustrated the bros, understandably so, and they have no interest in seeing this team going any further. But the race is something Justin and Diana have been studying for a while and they end up finishing the challenge first, making their way to the Roadblock. Soon after, Tanner and Josh finish as well, arriving shortly after the super fans.

The rest of the teams fared pretty well in the Detour, collecting their cardboard as quickly as possible. Some standout favorites right now are the dancers and the paparazzi teams who, while very different, are both likable. It was the Jazmine and Danielle who struggled the most with the Detour however, as they couldn’t find a cart and had to wait until Tanner and Josh were done to actually start the challenge, putting them in last place right behind the cousins, Adam and Alex.

At the Roadblock, one member from each team had to learn a tango routine and perform it with no errors. For country boys Tanner and Josh, this wasn’t any easy challenge and it was made worse by being there with Justin, who loudly cheered on and encouraged Diana, getting even more on their nerves. The superfans finish first as more teams are arriving and learning the dance, further frustrating Tanner and Josh. Paparazzi couple Chris and Logan are the next to finish, passing Tanner and Josh who complete the dance after them. A few other teams also finish the challenge as some are making their way to the Pit Stop and others are still practicing.

In the end, Justin and Diana took first place, where he once again got emotional about having the chance to be on a show he’s admired for so long. His routine is getting old fast and quite frankly, I find him just as obnoxious as the bros do. While they may be strong racers, this team is going to have to be careful about annoying other teams who could try to sabotage their game. Their own made up version of the race was completed solo but now that they’re participating in the real thing, they have to realize that other teams are a large component of it.

Getting to the Pit Stop next were James Earl and Denise, Logan and Chris, and Tanner and Josh. With Phil in sight, Tanner and Josh took off on a sprint to reach him before the other teams, securing themselves second place in this leg. Unfortunately, this risky and unnecessary move may have cost them, as Tanner pulled a hamstring in the leg race.

Left at the Roadblock were Jin and Ernest, Jazmine and Danielle, and Adam and Alex. They all made their way to Phil at around the same time, as Jazmine and Danielle benefitted from having Adam and Alex struggle with the dance. In another close call, Adam and Alex just couldn’t make it to Phil quick enough, and they were the second team eliminated from the race. The cousins were fun to watch run the race, as they were clearly passionate about it and excited for the opportunity. I would have liked to see them go further but in the end, the tango was too much for them.