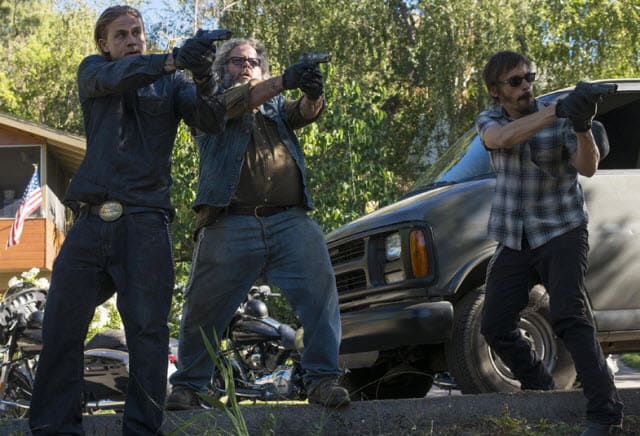 With Jax putting bullets (or knuckles) into the heads of just about everyone not wearing a Sons of Anarchy cut, it was obvious a bloody fallout of epic proportions is waiting for Jax and his club at the end of the series. To use the show’s abhorrent slang, they’ve been screwing over “black, brown and yellow” left and right – and despite Jax’s growing “calm” (according to his mother, who just had him hospitalize a man who slapped her), “Poor Little Lambs” isn’t willing to forgive him for his activities the past few weeks, dramatic constructions overtly designed for Jax Teller and the rest of the Sons to fail (with all the double-crossing and murdering, it’s been very obvious) that begin to crumble in a somewhat entertaining (if often illogical), momentum-building episode of Sons of Anarchy.

This episode is really splits itself against two of the season’s big stories (at least, early on): Jax protecting Augustus’s land deal while he continues to undermine his entire operation, and the retaliation for Jax’s recent killing spree against Lin’s organization. As expected, neither go swimmingly: the dead pastor’s drug-addicted wife and son try to escape, putting buck shot in Tig’s stomach, which causes him to finally fall in love with Venus, who makes her much-applauded (by the audience; I love Walton Goggins, but the constant tranny jokes are awful, as sweet as Venus can be as a person) return to hold Tig’s hand and generally be supportive. This then brings them back to their home area code just in time for paranoid Aryan Brotherhood tweakers to put a bullet in one of Charming’s long-time sherriffs, killing him but leaving his partner clinging to life (they didn’t even check to make sure they were dead? These guys are the worst criminals!), distracting them just long enough to allow Lin’s people to drop a grenade on them in the ice cream shop and slaughter everyone in Diosa (including Kim Dickens, a criminally underutilized presence on the show, save for being Jax’s one-time sex toy).

Go back and read that paragraph: it’s trademark Sons nonsense, a series of inconvenient coincidences snowballing into complete chaos, something that’s always been the show’s dramatic forte (when the proverbial feces is constantly hitting the fan, it’s hard to pay attention to anything else, and the show doesn’t drag out boring conversations and montages). What really works about the chaos that lands on Jax’s plate this episode is how well “Poor Little Lambs” conveys how overwhelming it all is for Jax: he can’t even process what happens at the ice cream parlor before Nero is getting a call from Lin’s men, preparing to murder everyone in the massage parlor (which Collette notices, and does absolutely nothing to prevent/stop/try to escape). Although he spent time underwater in this episode, he’s really drowning in blood, feuds started by his mother’s lie about who murdered Tara.

Although “Poor Little Lambs” doesn’t do anything overtly to build to this, it still feels like the episode is bringing the season’s real drama into focus: the showdown between Jax and Gemma. Everything in this episode condenses the narrative and pushes it forward: there’s still Augustus to deal with, but Lin’s assault on the Sons (which was probably initiated by Jury, after finding out who killed his son) will most likely bring their plot to an end soon, which would assumedly end with either Lin’s death (along with his gang) and/or Jax realizing that the Chinese didn’t kill Tara, putting his focus directly on his mother and what her lies have caused him to do. “Poor Little Lambs” nudges all these sprawling pieces in that singular direction, pushing things forward into one inevitable direction: someone pointing out to Jax the obvious fact the Lin, nor anyone else, would’ve gone after his wife (or children, one of which is an odd focal point this season, suggesting something horrible is going to happen to Abel, “his daddy’s son”).

That doesn’t mean “Poor Little Lambs” doesn’t make it through its entire 51 minutes without some laughable moments (and not intentionally funny, like the great joke Marilyn Manson’s character opens the episode with, talking in “code”). Juice is apparently full psycho after a week spent cooped up thinking about what he helped Gemma cover up: he’s babbling and talking about hearing stuff, crying to a woman (Gemma) who has a pistol and silencer that just so happens to match the one Juice puts in his bag before leaving with Wendy (the only character I hope is still alive at the end of the series; well, her and Unser, at least). Like Chibs and the new commander of police suddenly being attracted to each other, Juice’s sudden insanity feels created out of thin air, existing simply because it allows things to get more complicated and melodramatic than they already are.

As a whole, “Poor Little Lambs” is the strongest episode of the season, despite having the highest body count. It pulls this not-so-impressive feat off by bringing Jax back down to earth, where we can observe him in the eye of the storm he created (on the words of his mother). He’s starting to lose control of his life, which carries completely different consequences than his loss of morality: I don’t know if Sons will take the necessary step and see Jax connect the two (as he’s come so close to over the series; maybe when the homeless woman re-appears out of nowhere one last time, it’ll finally happen), but at the very least, “Poor Little Lambs” lets us entertain that this is a possibility, that the show might be able to crawl out of its self-designed, seasons-long tailspin just long enough that its protagonist has a little spiritual clarity, something the show’s forgotten he was looking for in the first three seasons of the show. Jax (nor Sons) may be redeemable at this point… but given how quickly it seems this season is getting to the heart of its story, there’s still a chance this show can end on a strong note. 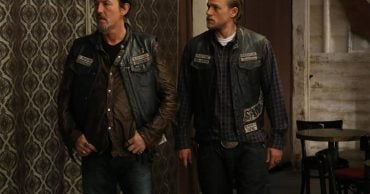 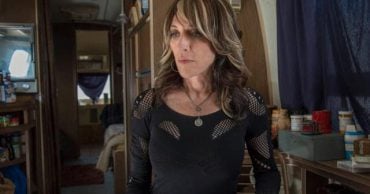 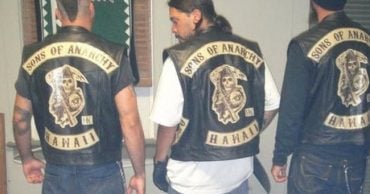 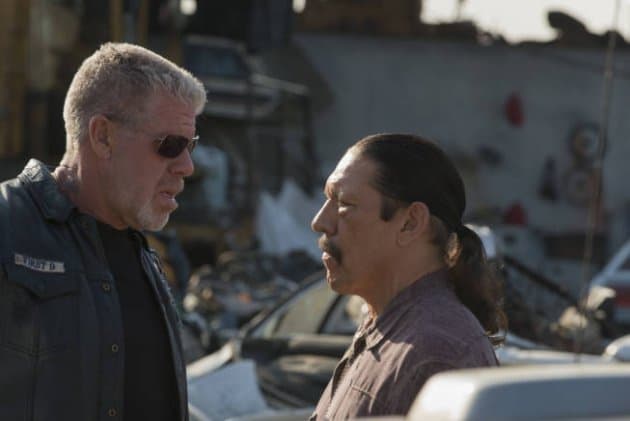 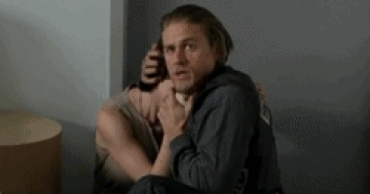