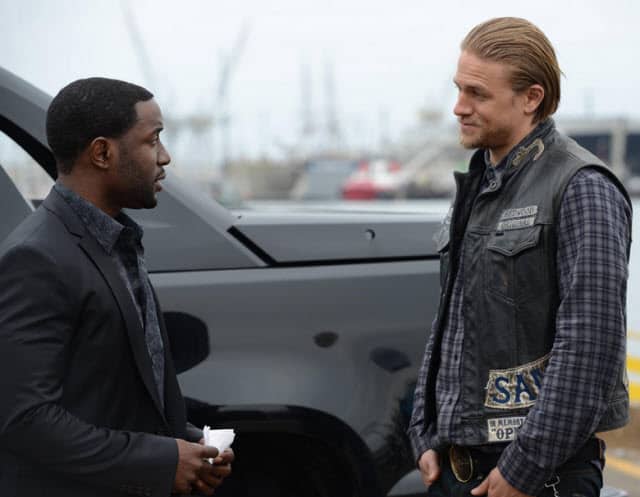 At this point, is anyone expecting any kind of surprises for California’s most-notorious MC? For the entirety of the series, Sons of Anarchy has told the story of one man trying to save himself, his club, and his family; however, season seven’s thrown that to the wind, rather focusing on Jax’s high-speed trip to Hell, a man who no longer acts like a leader or a father, but a homicidal sociopath who continues to harbor unrealistic delusions about how successful his plan to take down Lin’s gang is going to be. “Playing with Monsters” shows us with emphatic fervor that the Men of Mayhem have lost all chance at redemption, turning their heads to peace and forgiveness, instead embracing the same brand of death and deceit that presumably put their club in such a low, unrespected place.

What’s funny is just how easy all of the ridiculous story turns in “Playing with Monsters” are, and how little it seems the writers care about the characters in them anymore. Why anyone would want to align themselves with the MC at this point is beyond me: as the rumors fly about their connection to Lin’s stolen guns and the slow dissolution of his relationship with Augustus, it seems Jax has no shortage of allies he can find all-too-willing to be obviously screwed over by the club for short-sighted, selfish reasons. And it makes the courtship of his relationship with the new head of the splinter One-Niner group so much less interesting; the romancing of corruption was always one of the show’s more entertaining beats, but that sense of intrigue and danger holds no meaning anymore. We know Jax is going to screw them over; it’s all he’s done to anyone this season, two episodes being more than enough to establish that Jax isn’t a leader anymore, simply a maniac with a gun who uses his wife’s death as an excuse to murder people constantly (he’s not really mourning, or trying to move on with his life, instead deciding to fester in the horrible aftermath of his wife’s death).

He can’t even be a good father (with the help of Gemma: he can’t even keep his kids away from porn studio beatings!) to his children: and as Sons lets Jax drift farther and farther from any sense of purpose or morality, his adventures have lost all their bite. Simply put, everything that happens in “Playing with Monsters” feels incidental, a story that fits into the overall narrative, but in the most insignificant way possible (once it appeared Jax and Augustus had fortified their relationship in last week’s episode, it was obvious Jax would try to manipulate/undermine it at some point this week). Knowing Jax is doomed to die and/or lose everything makes his double and triple crossing is boring; and with nothing else to show us but Nero waving a machine gun (seriously; isn’t he done being a full-on gangster?) and Juice being an idiot (seriously, I can’t even handle how stupid he is anymore, trying to meet up with Chibs and get an 11th-hour stay of execution), there isn’t a whole lot to distract us from how mindless and tunnel-visioned Jax Teller has become.

With the rest of the Sons sqaurely in his corner (even Bobby Elvis can only manager a whimper of a complaint, telling Jax he could “slow things down” if he wanted to), there isn’t a lot for “Playing with Monsters” to show us for 50+ minutes (and that’s before the episode-ending montage begins). Jax beats down a narrative surrogate for Wendy (who is proving to be the season’s best character, the failed redemption story that actually appears to be working, now that Jax isn’t injecting her with drugs or emotionally abusing her), Jax turns all the black gangs in Oakland against each other, and the Mayans put pressure on Nero to start killing people; things easily accomplished in one or two scenes – and just as easily beat into the ground under the weight of Sons‘ plodding, extremely drawn-out structure. “Playing with Monsters” (named after a book Gemma reads to her grandson in the porn studio) doesn’t attempt to do anything beyond that (except to remind us that Abel has eye balls, and therefore can see all the violence around him), a lifeless hour full of angry faces, unsurprising twists, and another disturbingly-accepted mass execution at the hands of the Sons, another massive misstep that continues the show’s devolution from intriguing, Shakespearian biker drama into a self-indulgent, tone-deaf show about guys with guns who really need a shower.