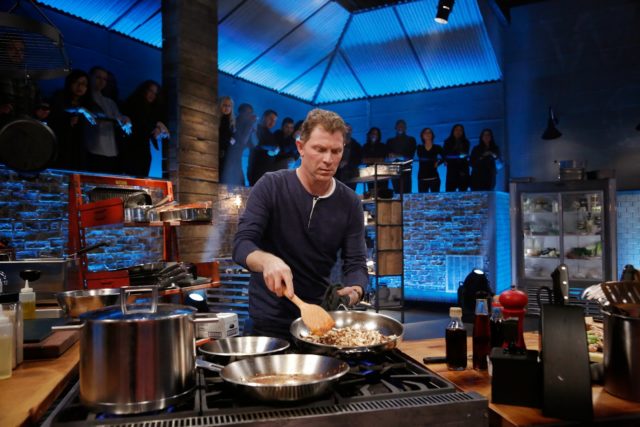 Beat Bobby Flay is one of the Food Networks longest running shows. With 13 seasons in and a very loyal viewership, it’s also one of the networks most successful cooking competitions. I have to admit I’m a huge fan of the show whether it’s a new episode or a rerun I’m watching. Which is why I was thrown for a bit of a loop when a friend of mine made the statement that the show is…. Fake.

We all know the basis of the Beat Bobby Flay show. During each episode, a chef competes against the Iron Chef Bobby Flay with their dishes being judged in a blind taste test by a panel of judges at the end. Beating Iron Chef Bobby Flay can mean notoriety and lucrative contracts for the winning chefs. Unfortunately, for most contestants though, Bobby Flay walks away the winner. In fact, Bobby Flay currently holds a record of 98 and 50 through 147 competitions. With a record like that it’s no wonder why many viewers would believe that the show is somehow rigged.

Once you also throw in the incentives for the Food Network to have Bobby reign supreme most of the time and mix in a panel of judges that often include close friends and acquaintances of Bobby Flay you realize that conspiracy theorist might be onto something.

So the question remains…

I think the answer to this question is pretty simple: NO. Although Bobby does win most of the time and he pretends he hasn’t cooked many of the dishes his opponents choose for the battle (I think his reaction here is the fakest part of the show. The guy’s an Iron Chef. There isn’t much he hasn’t cooked,) you would think that after hundreds of opponents and competitions there would be at least one competitor that has taken to the internet to say the show was rigged.

I haven’t found one occurrence of a chef that appeared on the show saying that it was staged. Which has to be shocking if you think the show is set up. In this digital age where transparency reigns supreme, and anybody can get on Facebook or Twitter and spill the beans it’s hard to keep a secret.Â  Even the White House can’t seem to keep secrets from the public anymore. Which makes it hard for me to believe the show is rigged. You also have to account for other factors like the blind taste test and the fact that the show is filmed in front of a live audience.

So, for all the naysayers I think the answer is simple. No, the show isn’t rigged. Bobby Flay is just one of the best chefs in the world, and that alone is why he continues to crush his competitors even as they have the opportunity to choose the dishes that will be the center of the competition. Plain and simple, Bobby is just that good. Now you guys get back to your UFO cover ups and theories that agent Smith was really “The One” on the Matrix.