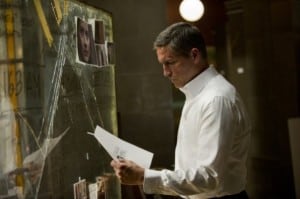 Harold Finch is momentarily out of the picture but that doesn’t mean that Reese, Carter, and Fusco get a day off as we find out in ‘The Contingency’ that the Machine is still capable of performing its primary function even without the presence of its maker. Meanwhile, Finch is off on a non dragged around by deadly computer hacker Root (Amy Acker) as he pays a price yet again for creating the Machine in the first place. Can Reese and the two detectives track down Harold Finch and keep the latest POI out of harm’s way?

‘Something to watch over all of us’

That quote came from Root’s crazed mind about the Machine and it holds true with the one exception of being incapable of keeping its creator, Harold Finch, out of harm’s way. More on that drawback to the Machine’s programming below; as the episode kicked off exactly where we left things with John Reese alone on the street demanding that the Machine help him track Finch down. Instead what Reese gets for his efforts of acting like a lunatic by speaking directly at a video camera in the middle of the street, (it’s New York City so he probably wouldn’t have gotten a second glance for that in real life) is a cryptic code via a nearby payphone. Upon some further analysis, and a super convenient guidebook to codes and ciphers in Finch’s possession, Reese realizes that the code words can be translated into the Dewey decimal system labels of Finch’s vast book collection. Nice way to weave those rather lovely background props into the actual story there. From there the numbers on the books from the social security number of this week’s POI, Leon Tao (Michael Emerson’s former Lost cast-mate Ken Leung). 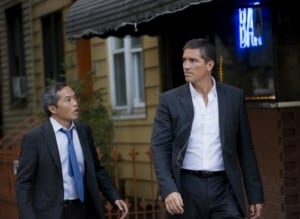 I don’t have time to babysit you

Upon meeting Leon at a seedy bar, Reese soon realizes that the Machine didn’t give him a number for someone to help him find Finch instead it just gave him a number of someone who needed help. Leon’s in deep with the Aryan Brotherhood, he stole about eight million dollars from them after being hired on at a corporate front for the Brotherhood following the loss of his own legitimate job at an investment firm. Person of Interest really does draw from the well frequently when it comes to having their POI be essentially decent people who find themselves a. screwed over by circumstances they can’t control or b. working for very bad people. Sometimes both in the case of Leon–though he claims that taking the money was his way at getting back at the Aryans once he realized who exactly he was working for. Once Reese fulfills his bar fight per episode quota for the night he decides to just pawn Leon off on the police as soon as possible so that he can focus on finding Finch. It doesn’t work out very well.

I only have one friend…okay maybe two

One of the highlights of the new character dynamics of this season is the fact that detectives Carter and Fusco are now on (mostly) equal footing with Reese–at least they both know they’re working with the ‘man in the suit’ at this point so that allows everyone to chance to work together. Having the overall feel of a real team working together is likely going to give the individual actors more of a chance to shine as it did tonight with both Carter and Fusco finally truly feeling as though they’re in the middle of things. Reese’s interplay with Fusco is definitely a highlight as it gives the somewhat stoic John Reese character a chance to show off his sardonic sense of humor. There was a moment where Fusco was escorting Leon back into his custody once the man had escaped from the police where he got the chance to be a hero and gain the upper-hand on some Aryan brothers who had caught up with Leon. Of course, Fusco got blind-sided and captured anyway but no one’s perfect. Reese rescued them both in a scene that had it all: ball-gags, Belgian Malinois (it’s a type of dog breed), and white supremacists getting thrown through windows for not knowing how to use Dutch attack dog commands. Not to mention the requisite bad-ass musical accompaniment to the triumphant trio walking out of the warehouse alive.

Toward the end of the episode, when Leon again found himself in harm’s way again–seriously the guy stumbled into his pursuers the entire episode– Reese got the chance to face off against the massive leader of this chapter of the Brotherhood. Yes he absolutely does say to him, ‘why don’t you pick on somebody your own size…or someone a little closer to it?’ But there’s a popcorn movie level of enjoyment in having most of Reese’s dialog be the kind of thing you’d hear in most summer action blockbusters. Plus, for those of you that like to joke that Reese is an awful lot like a certain Caped Crusader at times, well you can think of this as a small-screen homage to Batman Vs. Bane without the strange accent or oddly curable broken back. The bad guy even uses the word ‘rise’ right before Reese’s version of Robin, Detective Carter, takes him out. Proving that it’s a good thing that she and Fusco are in on things fully now. Just like last year, Reese is definitely going to need all the help he can get with the Machine’s new numbers, getting Finch to safety, and we were given a glimpse at yet more shadowy government conspiracies that will likely soon lead right to everyone’s doorstep once more.

A Man and his Machine 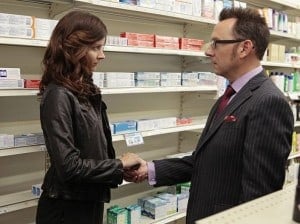 So what of Harold Finch through all of this? We get to see plenty of the character both in the present and all the way back in 2002. Nice to see that the show isn’t abandoning its flashback approach as they know how to dole out information in just the right way as to intrigue viewers enough to want to know more, but they also don’t let the mysteries of the show’s mythology become overbearing. In ’02, Finch is seen giving the earliest version of the Machine a few test runs including testing its multi-viewpoint capabilities at a local bakery and its outcome analysis at a casino. The tests go well enough and we’re really given a slightly better idea of what the Machine truly is–extremely advanced AI that doesn’t always listen to its master’s wishes. It’s here we’re given the implied reason why Finch wasn’t properly warned about Root last season. It’s because he specifically programmed the Machine–trained it even to not protect him when it should be protecting others.

The casino scene also showed us how tantalizing it would be to use the Machine for self-gain. Finch was able to fight the urge to use the Machine during a high-stakes game of Blackjack, but it was nice to see him struggle with the temptation to. On the other end of the spectrum back in the present day, Root is ruthless and her morals clearly don’t align with a man like Harold. With this role Amy Acker channels more of her damaged psychopath characters from her stints on Dollhouse and Alias than her sweet and pure-hearted fairy character on Once Upon A Time or Angel fan-favorite Fred Burke (pre-Illyria). She’s highly methodical and willing to harm anyone to achieve her goals, or even just to exhibit what she considers the result of her own ‘bad code’ of a personality. After a few stops along the way she and Harold wind up in the house of one of the men from the government scenes, Mr. Denton. She drugs him as soon as he walks through the door while she finishes explaining that she doesn’t want to control the Machine she wants to, ‘set it free.’ With full-on crazy eyes as Harold looks on helplessly.

Thankfully, Reese and Carter have a lead to follow that could help them locate Root’s location or at least gain some background information on the mysterious character they’re going after. So, as John said to Carter we’re heading to Texas to try to find Harold Finch. I hope they bring Bear (the attack dog John rescued from the Aryans and  re-named) along with them. 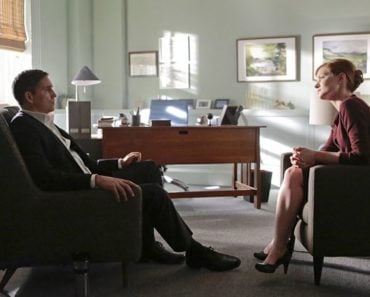 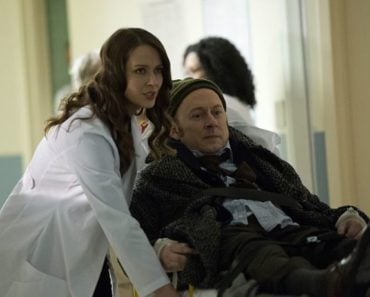 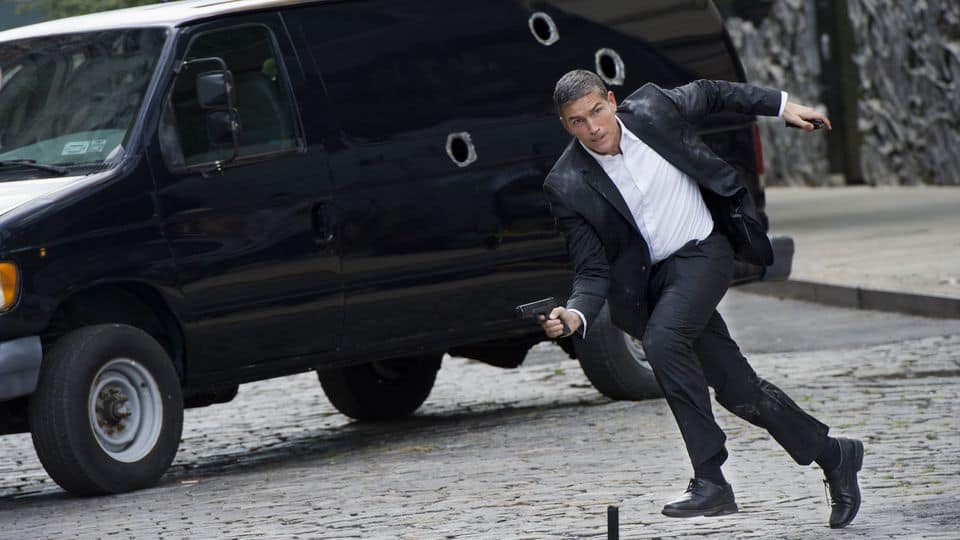 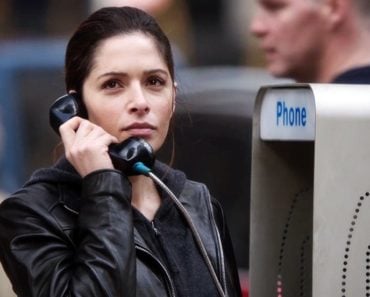 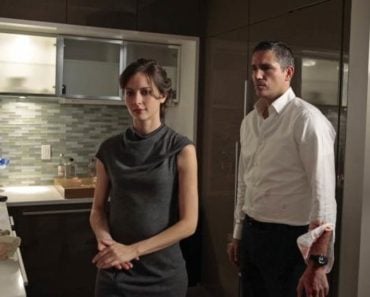 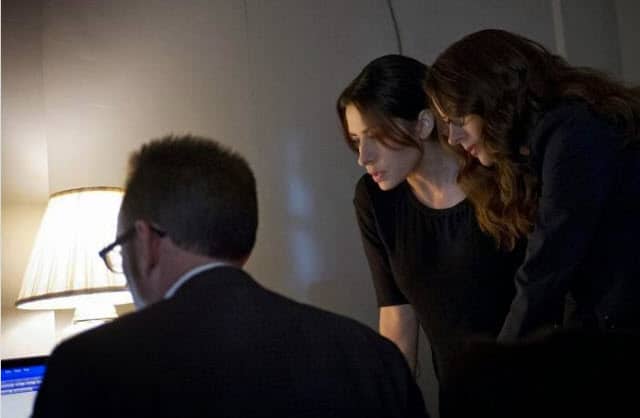 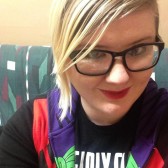