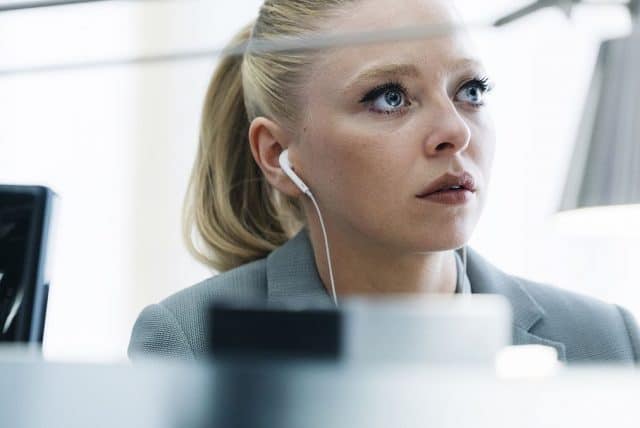 Another week, another journey down the rabbit hole of Elliot Alderson’s mind into the past in this week’s Mr. Robot, in what’s becoming a bit of an established formula for the season to this point. Like most episodes of this season so far, “eps2.4m4ster-s1ave.aes” spends most of its running time weaving in and out of Mr. Robot‘s reality, opening with arguably the show’s flashiest, twisted sequence to date. Yet, the more time we spend in Elliot’s head, means less time for the rest of its world to develop; and it’s there where “eps2.4m4ster-s1ave.aes” starts to show some of the fraying edges of the show’s narrative. A final, tense sequence helps to resolve some of this feeling of emptiness, but the many of this episode’s gimmicks, twists, teases, and reveals still feel… kind of empty in the large scheme of things.

The opening sequence, where Mr. Robot turns into the Rodney Dangerfield sequence from Natural Born Killers for twenty minutes (complete with vintage-style commercials), is the epitome of Mr. Robot‘s ambition this season. It’s an undeniably fun sequence, but it never really extends itself beyond the gimmick; by the time it actually gets to the point of the whole story, it’s the last thirty seconds of the episode, and the 90’s sitcom gambit is abandoned for the very tone and subject matter it was parodying in said opening scene. That contradiction speaks to the spastic attention span of Mr. Robot this season, and how that’s affected both narrative and character: there’s nothing particularly revealing about this sequence, feeling more like a creative exercise stapled onto the beginning of the episode to further stretch out the plot. Across the course of this episode, Elliot goes from a bed to a makeshift cell, a wonderful visual metaphor to the stunted emotional journey he has across “eps2.4m4ster-s1ave.aes”. It takes 25 minutes of material for Elliot to… realize that he’s never going to get rid of Mr. Robot?

There’s certainly a lot to appreciate about the craft of the opening sequence; however, it’s impact is that of a flash bang, rather than the fireworks show it purports itself to be (again, the parody lasts for twenty minutes, entirely uninterrupted). It’s clever and all, sure, but there’s no denying the narrative whiplash when we’re suddenly out of Elliot’s head, and back behind Angela’s pony tail again, shoved back into the real-world story that’s been of varying levels of importance this season. Team fsociety is trying to hack the FBI (with some typically-juvenile tools; the wireless ID they use in this episode is “WANK”), and Angela’s down for that, because… Price was kind of responsible for the whatever thing that killed her family?

Honestly, Angela’s backstory is far less interesting than the character she’s been in recent episodes, so it’s no surprise her underlying motivations are being lost among the dangerous adrenaline highs she’s chasing by teaming up to take down Evil Corp. “eps2.4m4ster-s1ave.aes” is a prime example of why: her sense of focus and determination to prove to Darlene and company that she’s more than just a dope pony tail and a lot of talk is as compelling as anything this season’s had to offer so far. While Darlene and Joanna are off on their own power trips, wielding powers we don’t really understand how or why they have, Angela’s tooth and nail fight for credibility, wealth, and influence has provided a clear arc where even Elliot has come up short lately.

It’s not that Elliot hasn’t had an arc this season, but it’s most working through the same material as last season: Elliot’s father was pretty terrible, a little sympathetic, and very influential on Elliot. “I’ll never leave you”, as cliche as it feels, is a powerful phrase to hear – but what are we really learning here? We already know Elliot is going to reluctantly embrace Mr. Robot again, last week’s episode established that. So instead of just biding time between scenes of Angela breathlessly trying to hack the FBI (while fighting off casual misogyny played for humor, I might add), what are we doing inside Elliot’s head here? We’re not adding to Ray’s character at all, who went from intriguing presence to complete stereotype in the course of the last two hours; and ultimately, we’re not learning anything new about Elliot or his father’s lost sense of humanity.

This brings the dissonance at the center of this season into sharp focus: going deep is not Mr. Robot’s style. When its at its best, it’s ranting about vague notions of revolution and social justice, filtering its view of the modern world through the slightly satirical, off-kilter mind of a drug-addicted hacker with illusions of grandeur. Vascillating between shots of writing code, and exploring the shadows and darkness of Elliot’s reality brought a certain unity to the first season: everything felt cold and calculated, even when things were going unpredictably off the rails (think about Tyrell’s murder in 1.08, for example). This season, Mr. Robot is trying to go cold with Angela and Darlene, and then try to do something completely different with Elliot, isolating them from each other and sticking a half-baked FBI investigation in the middle to keep up tension in the second act. The tonal dissonance is loud and clear; and it completely throws the show out of balance, pushing us to invest in Elliot’s cyclical personal journey, abandoning the very emotional distance it aims to preserve in other scenes.

Perhaps the most telling sign of this frustrating dichotomy come from the show’s opening and closing sequences: in the beginning, Mr. Robot goes out of its way to be cheeky, delving into its dark sense of humor as it pushed further and further into its surrealist fever dream. It pokes fun at conventional plot structure, and the sappiness of the emotional father/son scene… only to replicate the moment at the end of the episode? Yes, I understand the emotional significance of it all; but with a pile of dialogue that directly implicates Elliot’s dream world as a construct of memory Elliot tries to escape to, it feels like Mr. Robot is trying ot have its cake and eat it too, all without going through the necessary steps to both invest in the emotional point it’s trying to make (that Elliot could never really hate his father) to serve the larger narrative purpose it exists to execute.