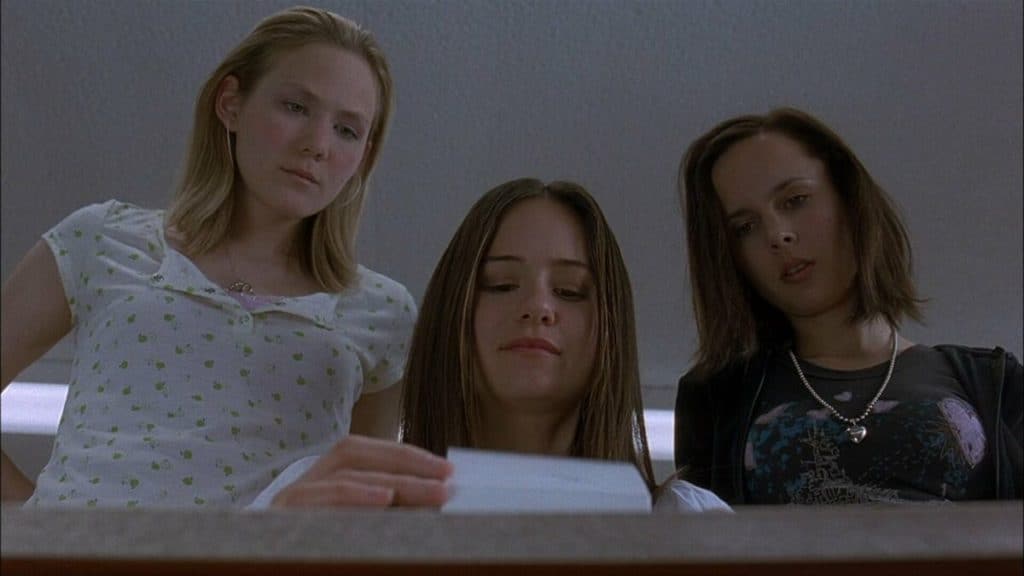 Have you ever watched a movie and felt that it should have ended in a manner far messier than it actually did? That would sum up The Babysitter’s in a nutshell, especially considering the premise is about frustrated, married men having sexual relations with teenage girls. It doesn’t help any that Shirley, who starts the idea, has no trouble starting up the business, and has no issues with ‘babysitting’ for several men, apart from the man that she initiates her first relationship with. The lure of money is what gets Shirley to continue, and what allows her to bring in her friend Melissa, who’s all too eager to make a little extra cash. The issue comes when Shirley and her first client, Michael, played by John Leguizamo, decide to expand the babysitting venture as Michael tells his friend Jerry, who tells a few other interested individuals that are ready to drop the cash that the girls charge for a romp wherever they can a bit of privacy. This is the type of movie that would likely be turned off by a lot of parents since the general feeling is a mixture of confusion and anger that is produced by the premise of this movie is enough to sicken more than a few individuals.

Getting past the controversy within this movie is the first step, but anticipating that it will all end badly is the next since it’s a long time coming. When Shirley and Melissa bring in a friend by the name of Brenda, things start to get out of control as she then brings in her stepsister Nadine, who’s scandalous as they come. It’s not all that long before Nadine, no doubt not wanting to give Shirley a 20 percent cut of her money, as Shirley is the originator of the idea, starts taking Shirley’s clients for herself and a few other friends that want to make extra money. While Nadine is quiet enough about the takeover, the bling that she and her friends couldn’t afford to begin with but end up sporting is a good indication to Shirley that Nadine has stolen her clients.

When Shirley and Melissa, with Michael as a lookout, trash Nadine’s locker while looking for her contact list, or proof of what she’s doing, they end up trashing the school to hide the act. The next day, Shirley calls a meeting with Nadine and the rest of the girls, explaining what will happen and what will be expected. It’s a message that doesn’t exactly inspire Nadine to stop, but she does play by the rules for a while as Shirley and Melissa stage a retreat with phony permission slips to a cabin in the woods owned by a friend of Michael’s, while the men that meet them there are supposedly on a business meeting that will keep them away from home for a few days. This is actually where things start to go bad, since not only does Brenda suffer a bad trip and begin to talk about quitting, but Jerry also tries to rape her, which only makes things worse. If anyone saw Nadine taking on the business on her own again after this then they saw the pattern that had already developed.

On top of that, Brenda’s reaction to the business eventually becomes so bad that she abandons two children while babysitting, calling her brother to come to get her. At one point her brother is actually brutalized by two of the men that are heavily invested in the babysitting gig, and things really begin to go belly up as Nadine goes off on her own once again and Shirley and Melissa begin to fall apart. Not only that, but Shirley and Michael begin to break down as Michael’s possessiveness of Shirley is rebuffed as she reminds him that this is a business and that she’s not beholden to him in any way, which is amusing in a morbid sort of way since she was the one that appeared to want the relationship in the beginning and felt that it was right. In other words, once feelings and business started to become combined, the mess that one could have expected began to build in a big way.

At one point, Shirley and Melissa nearly toss Nadine off of a roof after Jerry drags her and several girls out of the back of a vehicle where they’re with an older man, who turns out to be Shirley’s father. It’s not hard to imagine the breakdown that happens after this, as the babysitting ends, as does the relationship between Shirley and Michael. To say this was a disturbing movie is easy, to say that it ended far more peacefully than it deserved to is even easier. In the real world, the result of this kind of behavior would be disastrous, but in the movies, people can get away with just about anything if the script calls for it.