Home
Television
Men in Kilts: On the Sporty Side 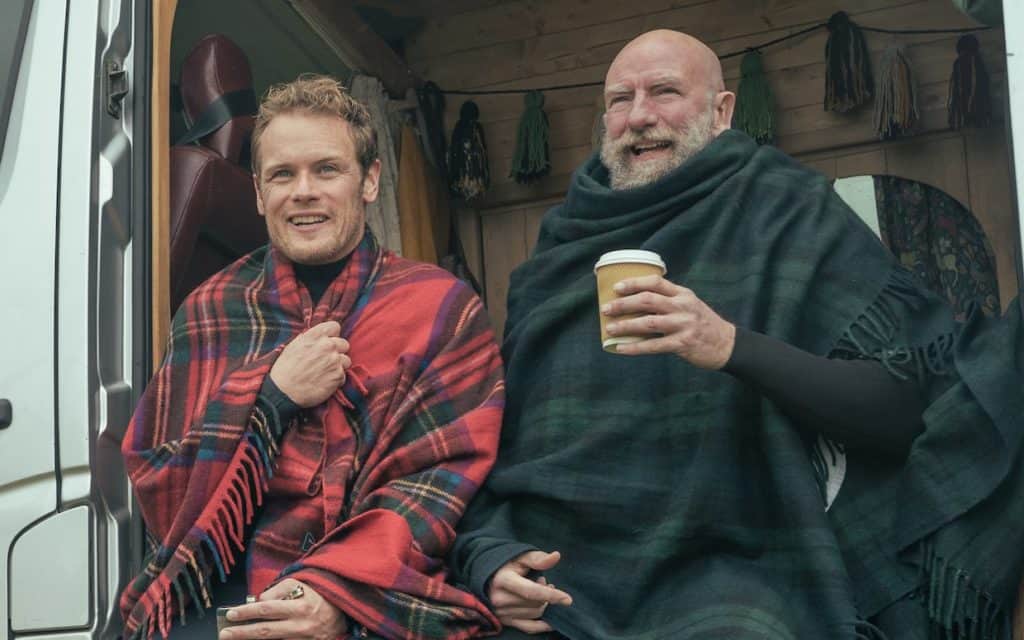 For those that were watching the second episode of Men in Kilts, was anyone hoping that Graham would win the bet that he and Sam made? Oh yes, there are spoilers ahead if you haven’t seen it, but then that’s the point of these articles, to tell you what’s happening and what was interesting about the episodes after all. This time around the guys headed off to explore the sporting side of Scotland, which is far more diverse than a lot of people might think. The fact that people surf in Scotland is likely something that a lot of people didn’t know, but in the opening of the episode, it would appear that this is in fact a thing, though it might not be something that Graham is capable of picking up that quickly. Sam appeared to be doing just fine, however, but to be fair he wasn’t exactly catching any big waves, though who knows, the guy might be pretty good at it. He managed to get up on his board at least. But in learning that this was to be the episode that would focus on the sports of Scotland I couldn’t help but get excited simply thinking about it since this is the place where golf was supposedly invented, though of course like all things this is bound to be challenged by those that have something else to say about it.

In any case, the guys start out by heading out to perform an activity that is pretty simple in nature but definitely takes someone that has a little more arm strength than either man possesses. Let’s be fair here, Sam did manage to get the lifting stone on top of the platform that’s apparently been there since only God knows when, while Graham didn’t even want to bother. That’s impressive enough, and before pressing forward it did put Sam up one to nothing in regards to a bet that the two men made before getting to the stone, which was that whoever came out the winner by the end of the episode would watch the loser take a skinny dip in the North Atlantic. For those of you catching up, that’s right, the loser would have to take a dip into the chill, or rather frigid waters of the Atlantic Ocean as penance for losing. Yes, men do some truly stupid things, but for some of the most insane and funny reasons, and thankfully this wasn’t too bad of a debt to take on, even if Sam appeared to be a little worried about it. But seriously, who was betting on Graham, apart from those of us that are a bit older? It was a worthy contest all the same and by the time they made their way to the Highland Games some of us were likely getting a little excited since those that know anything about these games would feel the same. The events they picked were kind of interesting, but the hammer throw was definitely a lot of fun to watch since in the states this throw is a bit different.

For one, the fact that the hammer, ranging from 16 to 22 lbs., is attached to a length of wood does affect the swing. The hammer throw is one of the oldest events around, and the form it’s taken now, with the hammer being attached to a steel cable with hand grips, didn’t come until much later. The act of spinning also came, later on, so one has to imagine standing there trying to get the momentum to swing this heavy ball attached to a wooden rod so as to achieve the best possible distance, which Graham ended up winning. Not to shabby old man, as the score was increased to 1-1. Next up was a definite favorite of many since St. Andrews is by far and large one of the most venerated places in the history of golf since this is where many would claim that the sport was created. While that might be contested, what can’t be contested is the fact that Graham once again managed to outdo Sam in a simple fairway challenge, smacking his ball straight down the course to give Sam another loss, bringing the score to 2-1 in Graham’s favor. Hey, it’s a fair contest at least. The last stop was definitely one of the most fun to see since they made their way to Murrayfield, a place that many rugby fans likely know very well since it’s one of the sites that stand as the pride and joy of Scotland, especially considering the love that they have for the sport. Sadly, for Sam, this is where the bet was finally decided, as Graham just barely outdid him when it came to overall skill, and possibly a bit of luck.

At least Sam was a man of his word and took his skinny dipping with some amount of grace. Ah yes, on to the next episode.