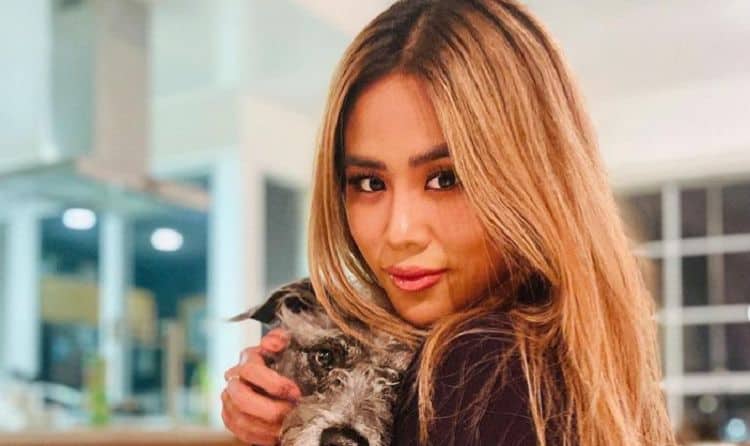 When there are 32 other women also dating your boyfriend, it might seem hard to stand out. Fortunately, for Marylynn Sienna (or unfortunately for the rest of the women that Bachelor Matt James is dating), she does not have any problem standing out in the crowd. The striking beauty is looking for love with the latest edition of the Bachelor, and she’s hoping to find it with a man who will love her, support her, and love rescue dogs as much as she does. Will she find love with the new man of the hour, or will she be left alone and still looking for love? Let’s find out.

Marylynn Sienna was born on August 27, 1992. She’s among the few women on the show this season who is close to the same age as the Bachelor. Some are much younger, so they might have that in common as they try to navigate their new love.

Who isn’t? No one wants to encounter one in the ocean when swimming or boating or surfing, right? She’s a fan of surfing, though. We wonder how much her fear of sharks keeps her from trying to surf, however. It is paralyzing for many.

It might sound like the kind of job that is a lot of fun and absolutely enjoyable, and it is. However, it’s a lot of work. To coordinate events both large and small is quite a feat. You have to be organized, on top of your game, and ready for anything. You have to be able to think quickly on your feet and figure things out in a second or less, and that’s what makes one successful in this line of work.

4. She Knows What She Wants

She’s not asking for much, in our opinion. She wants a man who prioritizes his own health and his own hygiene – and we aren’t sure what this says about men today if she has to specify this – as well as someone who is outgoing and enjoys having a good time, wants dogs, and wants to help her make the world a better place.

5. She’s One of A Few Women from SoCal on the Show

She is one of five women from Southern California who want to find love on the show. She’s from Studio City, and the other women are from Valley Village, LA, Costa Mesa, and Newport Beach. It’s a broad range of women from the LA and OC areas, and she’s hoping she can stand out more than they do.

If you have the chance to check out Marylynn Sienna’s Instagram page, you should. She has such a way with words. Her caption on the photo of her meeting James for the first time is lovely, and she goes into how much of a bond she shares with the other women on the show, too. Check it out.

She loves a rescue dog, and we love her for that. She has a goal of having two more rescue dogs of her own in her five-year plan, and that involves finding them with the new love of her life. is that the bachelor himself, or does she make it far enough to find love with him?

8. She’s Into Bettering Herself

Not only does she practice daily self-affirmations in her life, but she also uses mistakes as a lesson for being better, doing better, and making her life better. She’s not someone who sits around waiting for things to happen to her. She makes them happen for her. She’s a strong personality who has a clear visual goal of what she’s looking for, and she makes it happen in her life.

Despite being a reality television star right now, she’s someone who goes out of her way to maintain her privacy. She’s on social media, but she’s not spending any of her time giving away too much of what she’s doing in life. She keeps the private details of her life to herself, and she’s not giving anything away that shouldn’t be shared with anyone else. She’s very good at keeping what’s important to her out of the press.

In a post on Instagram from September 27, 2020, she makes it clear that she chose to embrace life rather than enduring it. So many people do just that; they endure what life has to offer rather than living it and embracing it and loving it when it happens. They just sit back and allow life to happen to them rather than allowing life to happen for them, and she’s no longer and endure-r. She’s an embracer. We love that.