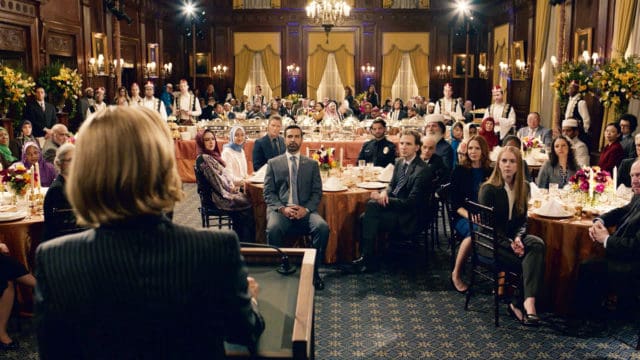 Before I begin this review, I would like to wish all the mothers out there a happy belated Mother’s Day. Now, let’s get right to it, shall we? I have to warn you, this week’s episode of Madam Secretary will not end on a happy note.

The hour begins with terrorists controlling the Fakhiri Dam in Northern Iraq. They want the Turkish government to release their leader Abu Kaebi or else they will blow up the dam. Cue the team at the State Department to come up with a solution to solve the crisis. Oh, did I mention that they’re also planning a post-Ramadan dinner to mend fences with the Middle East?

I felt that the way that the process to resolve the humanitarian crisis in the Middle East is a bit rushed. It’s like watching dominoes fall at a rapid pace with no way to stop it. I understand that the United States is put under pressure to prevent this humanitarian crisis, but they could at least take a breath and take the appropriate steps with a more calm and rational mind. Then again, this is a life and death situation with millions of lives at risk. Maybe running around like headless chickens is a more fitting way of dealing with this.

Meanwhile, Stevie is trying to find a way to help Russell Jackson lower his stress level. She turned to her father for advice only to get an earful from the White House Chief of Staff later in the episode. I think that the eldest McCord child did not deserve that tongue lashing from Russell. She was only trying to get some pointers on how to begin her search. It’s not like she’s telling her Dad any national secrets or anything. Russell confided in Henry later in the hour and told the professor that he used to build model airplanes. From the scene with him sitting at a table with supplies to make said planes, I think we have a winner. However, I have a feeling that he will ditch that relaxation method when he gets wind about the Russian incident with the Kurds.

I applaud Foreign Minister Uzun for helping the U.S. stop the terrorists from detonating the bomb placed in the dam. It resulted in him losing his title and shipped back to Turkey to be executed for his crime. Thankfully, Elizabeth stepped in and had him arrested for smuggling dates out of the country. It means that Uzun will receive political asylum in the States and can remain on U.S. soil with his family instead of facing certain death back home.

Ambassador Cyril (didn’t catch his last name) also deserves some major kudos. He abided by all the demands from the Secretary with regards to the post-Ramadan dinner. That, and he helped her get a one-on-one with Foreign Minister Uzun. I called the elevator meeting with Elizabeth and Uzun. I mean, as soon as he reached the seventh floor I knew that Elizabeth would come barging in.

In the end, the Fahkiri Dam did not turn into rubble. However, the attack initiated by the Russians was shocking. I know that the two nations are not exactly on good terms, but this may lead to a third world war if nothing is done to nip it in the bud. Hopefully, Elizabeth can think of something in the upcoming fourth season finale.

“In diplomacy, if you don’t lay the right groundwork or say things the right way, the message doesn’t get through.” – Ambassador Cyril

“Be good to the people you love and work hard at the things you care about.” – Russell Jackson

Terrorists threaten to cause a flood by blowing up a crucial dam situated in Northern Iraq that could kill millions of people. Stevie is tasked with finding Russell an activity that will help manage his stress in this week’s Madam Secretary.