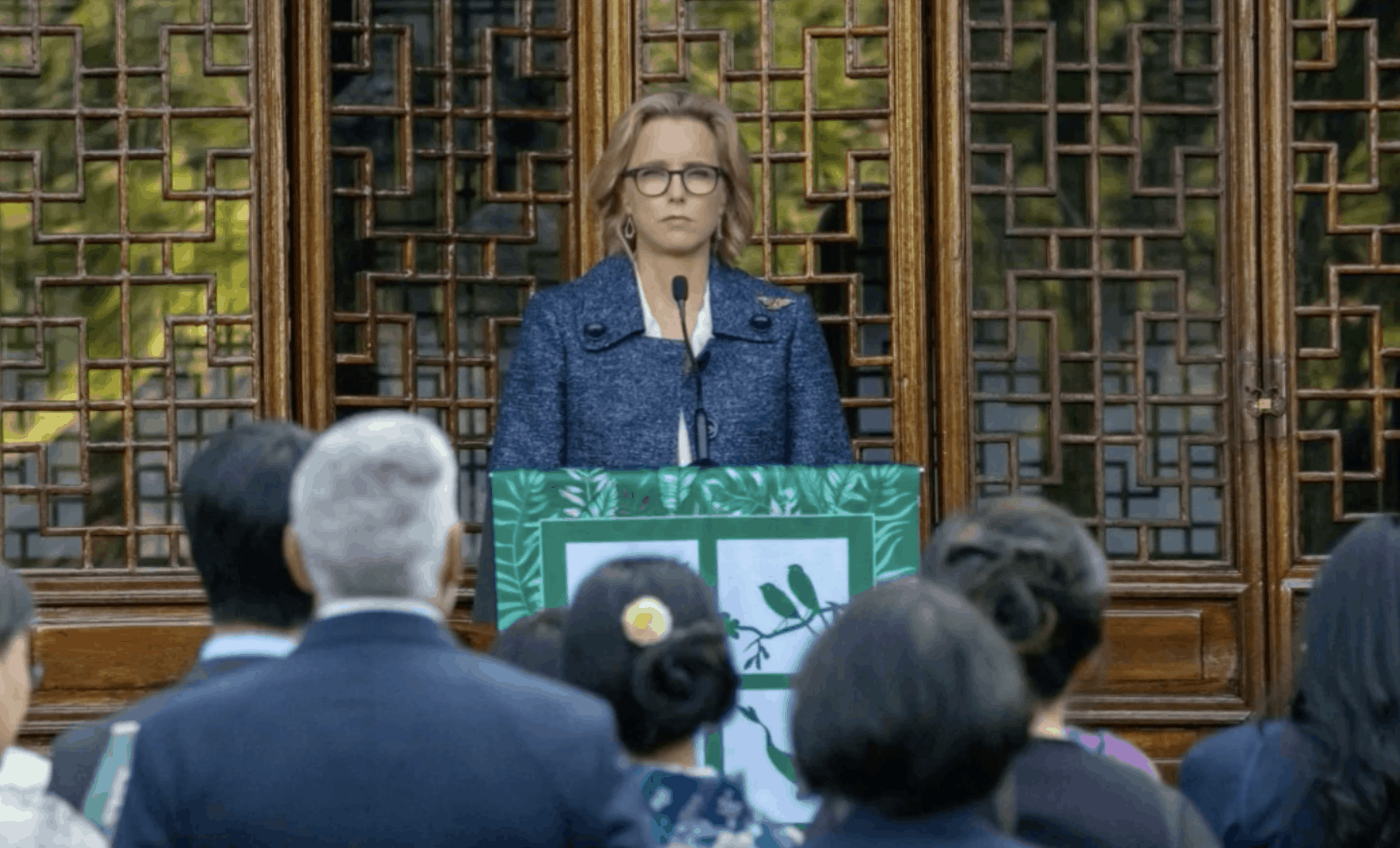 When a person is desperate or doing something that involves family, they will risk everything to ensure that they succeed. In this week’s episode of Madam Secretary, Vice-President Teresa Hurst risks her political career. The reason? To ensure the health and safety of her unborn grandchild. Blake also has his hands tied with making sure that the Japanese peace garden makes everyone happy.

The hour began with a couple on a plane heading to Laos. They’re going to meet their surrogate Ailani Lo, who is carrying their child and is due in a week’s time. The couple got to where Ailani lives only to discover that she, along with a number of pregnant women, get into a police van. Turns out, their arrest is due to the crackdown by the Laos government on human trafficking.

Back in the States, a woman is giving a report on the issue to President Dalton as well as Vice-President Hurst, Russell, Elizabeth, and Henry. POTUS wants to hit the countries that still allow human trafficking where it hurts. Elizabeth argues otherwise, saying that by cutting off financial aid, it would also affect the citizens of those countries, but the president stands firmly with his decision.

Later, Vice-President Hurst asks Elizabeth for help in saving the surrogate carrying her unborn grandchild. This reveals that the “constituents” that Hurst spoke about before is her daughter and son-in-law Lyla and Charlie. After the news about the surrogate broke in the media, President Dalton calls everyone to the White House. Henry sides with the VP, which caused a minor strain between husband and wife afterward. The Secretary understood her husband’s point, but she’s miffed that her plan to create an international coalition to advocate for surrogates and decriminalize surrogacy is shot. Henry thinks that Vice-President Hurst is the one behind the news leak, which I agree with. I know that VP Hurst is heartless at times, even downright diabolical, but she cares for the people she loves.

Meanwhile, Henry gets some disturbing news about someone stalking Stevie from National Intelligence director Ephraim Ware. Turns out, Dmitri heard about the White House attack and wants to make sure that Stevie is okay. He enlisted his sister’s help in this endeavour which Talia reveals to Henry at the cafÃ©. At least we know that the young woman is not working for Russia as a spy. The letter that Dmitri sent Stevie was rather heartwarming. Sure makes me wish we knew what it said to fill the void in our hopeless romantic hearts. It’s also nice that Stevie was able to write back to her boyfriend towards the end of the episode. Hopefully one day, they will be able to see each other again. Emphasis on the hopefully.

Back to the surrogates, Elizabeth tried to get the Laos government to release them from jail. Unfortunately, the latter is unwilling to budge, countering that the bombs that the United States left behind during the Vietnam war have killed 50 of their citizens each year. The Secretary then convinced Vice-President Hurst to appeal to the Laos government both as the VP and a mother/soon-to-be-grandmother on behalf of the surrogates. To say that it worked is an understatement as every single surrogate is released. High-fives all around! Maybe Lyla and Charlie will name their baby girl after Elizabeth? I mean, she’s the one who made the release possible. Just a suggestion.

I was confused when Stevie went to a hotel room to read the letter from Dmitri. Then I realized that it must be the room where the two stayed at during their secret romantic rendezvous. How fitting.

It was sweet of Blake to arrange for a bench plaque to honor Usuki’s late grandmother. Also major kudos to the Secretary’s assistant for standing up to Usuki at the racetrack when the latter wants his name put everywhere in the peace garden. Yeah, that’s a bit outrageous and pompous if you ask me. Kudos to you, Blake! Much kudos!

Kudos to Stevie for seeing through her father’s ploy in telling her about Dmitri. The professor made a pancake breakfast as his way of easing into the conversation. Way to be subtle, Henry McCord!

Elizabeth knows Jay all too well. She even knows the look that he gives her when he doesn’t fully agree with her on things.

Point of Curiosity: How much did that watch Usuki sent to the State Department cost? It’s more than Jay’s car, but we need a bit more context than that lol.

Blake staying up all night. Never thought I’d see the day. He’s going to be so tired when the adrenaline wears off.

The Japanse garden strangely reminds me of the one used in an episode of Lucifer. Either that or my mind is playing tricks on me.

Matt’s vague synopsis of his speech for the Secretary to give at the garden ceremony amuses me greatly. I think that’s the basic speech-writing formula for some if not all political figures.