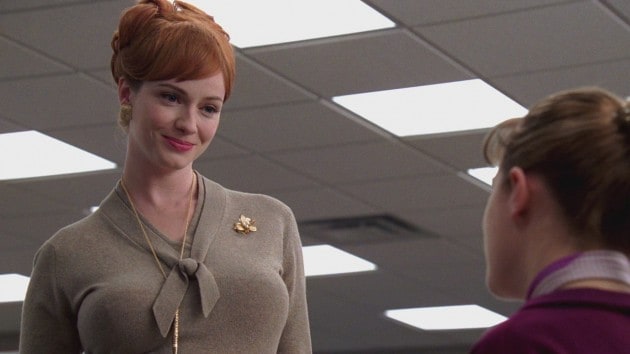 Perhaps the most disappointing character of the entire Mad Men series is Paul Kinsey. His introduction is as crass as Ken and Pete’s; he is as much the voyeuristic lecher that his pals are. But whereas Pete goes to work on Peggy with that old frat boy charm, Paul goes for white-knight savior sincerity. He shows Peggy around the office and buys her lunch, and behaves as if he actually is interested in who she is as a person, instead of a roll in the hay. The warning signs are there, of course, from the very beginning; I’ve already mentioned his lecherousness, but more damning than that was his failed dalliance with Joan.

Joan has already learned to play the game; she’s entrenched in it, as much a part of it as anyone else, and reaping the safety and short-term benefits that comes along assisting those who have offices on other side of the glass ceiling. She deals with Roger, who wants her to replace all human contact with a bird, so that he doesn’t have to share her; if you squint a little bit (or not at all), you can see the faint outlines of a priceless painting, or perhaps a vase full of jewels, dancing in Roger’s eyes when he looks at her. The point I am trying to make is this: if Paul Kinsey can run off Joan, then there must be something really wrong with him.

This, of course, turns out to be true. Is it worse to be openly misogynistic, or hide it behind opening doors and buying lunch? It’s a trick question, of course; there is no winner here, just an easier target for those who seek to root out that sort of corruption. But there is something more frightening about the former. Part of what it means to be human is to read others so as to follow social cues and communicate with them on a level that they understand. We pride ourselves on the ability to know when someone is lying; that is our protection against those who want to get one over. There is nothing that we fear as much as being tricked into doing something we didn’t want to do, and that, my friends, is the problem with Paul Kinsey. His sincerity is as hollow as the work he brings to Don. Paul’s goal is to sleep with Peggy Olson, and so he shows her the ropes because he wants her to feel that she owes him a debt; no checks, please, just push the couch in front of the door and hike up your skirt, because this wont take long.

Don Draper is essentially Paul Kinsey, and this is the problem. Don is untrustworthy, because all of his good deeds, especially this early, are to further his own wants and ambitions. This becomes much more apparent as the show goes on, and really rears its head in the next episode, but there is no clearer example of this than Betty going to the psychiatrist. Don spent the majority of “Ladies Room” pushing back against the idea of psychological deep-diving; he doesn’t come right out and say it (neither does Roger, who hates that Margaret is seeing a shrink) but the undertone is that it shows weakness. Don expresses this with some idea about psychiatry being for those who are unhappy, but whether Betty is unhappy or not is immaterial. Don is concerned about how it affects his life, and how it makes him look. It’s only after multiple attempts to browbeat Betty into staying the course that he changes his; a car crash with their children in the back is the only thing that snaps Don out his selfish behavior.

Around the office, it’s a foregone conclusion that Don and Peggy are sleeping together; this is played for laughs, but it really isn’t that funny. Paul Kinsey’s first reaction to Peggy’s rejection of him is to assume that Don has already claimed her, and the unhappiness on Kinsey’s face is palpable. Kinsey, in his mind, has lost to a bigger, stronger man; whatever alpha male aspirations Kinsey has are superseded by Don’s. There is no thought of what Peggy wants, or what she might feel; the only reason that she wouldn’t sleep with Kinsey is because she’s already taken. The people in this world respect the men in relationships, but treat the women as cattle or quilts or a bottle of whiskey, passing them around until they’re too worn out and too empty to be of any use anymore.

Betty’s concern for her children is rooted in deep-seated misogyny. Her worries lie with Sally ending up with a scar, dooming her to a life without a husband or kids. There is no self-awareness in her comments; she is okay with Bobby having a scar, for example, and doesn’t seem to recognize the inherent problem of the double standard.

All care for women is rooted in this sort of double standard. Don wants Betty to be independent and free of this disease so that he can come home and not have to worry about her. But when she does go off to therapy for her troubles, Don doesn’t trust her to fix it and spies on her. It’s a starling breach of privacy; Don closing the door at episode’s end so that he can have a conversation with the psychiatrist means that he recognizes the wrongness of his actions, but won’t change them. He is unable to fix Betty the way he is, so he spies on her; he is essentially doing research so that he can sell a better Don. On the surface, this is actually a noble pursuit. But that would require Don to actually think that there was something wrong with him, and not just with the way Betty perceives him.

When women kiss men in this show (and in a lot of media), they put their hand palm down on the man’s chest. I’ve always found it to be a strange gesture; it seems uncomfortable for the woman, and doesn’t do anything but get between the couple. But what I realized is that it acts as sort of a barrier, almost a psychological one that men don’t notice but are affected by anyways. It’s a way for the women to end the kiss, to stop the embrace on their terms. All they have to do is pull away, and push away, and that’s it. In Mad Men, this takes on much deeper significance. There probably have been many times when these women were kissed for too long or perhaps against their will; when all of the boys are in Don’s office, they shove Ken down on Don’s desk to test out the new spray deodorant, and they tell him to imagine that it’s prom night and he’s the girl. Multiple men tearing your clothes off and holding you down so that they can do what they want; not to put too fine a point on it, but it makes sense why women would be protecting themselves, even as they allow themselves to be vulnerable.