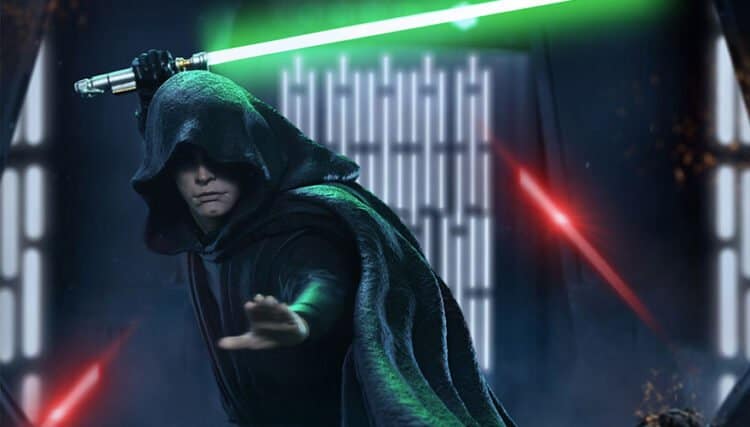 It’s kind of fun to read the forums and realize that some people believe that allowing Iron Man everything he needs, which includes prep time and every possible technological advantage he could bring to bear, would be enough to beat Luke Skywalker. What’s really funny is that some will state that Iron Man at his best will stomp a basic version of Luke. And they’re right, but it wouldn’t be an easy fight. Fighting the Jedi Master in his prime, however, when he’s at his strongest, makes a person wonder how in the world anyone could think that Tony Stark, in any Iron Man armor, would be able to stand up to a Jedi that could anticipate just about every move he would make. More than that, the fact that Luke could affect Tony from a distance in more than one way has to be taken into account. Tony is an intelligent human being, but he’s also arrogant and not immune to mind control, even if he’s less susceptible to it. But against a Jedi Master, who knows more tricks than mere mind control, this doesn’t feel like a strong defense.

Iron Man could keep Luke busy from a distance and possibly predict a few of his movements, but where this fails is that Luke is capable of increasing his speed in such a way that Tony would have to be aware of his power and plan accordingly. In a random encounter, this isn’t going to happen since Tony won’t be aware of what Luke can do, and he’ll be taken by surprise in a few ways. Force lightning, which Luke has manifested before, wouldn’t be a big help, since Iron Man has taken a blast from Mjolnir, and Tony’s suit has managed to take a heavy blast from the Power Stone. But there are a few different ways that Luke could tip the scales in his favor, and there’s one trump card that might not do much damage, but it would be advantageous all the same.

The fact is that Luke is powerful on his own through his use of the Force, plus he’s a skilled combatant and many people do believe that his lightsaber would be able to cut through Iron Man’s armor quite easily. One factor to take into account is that Iron Man has many different armors, and unless he uses his Extremis armor or something heavier, like Uru perhaps, he’s going to be diced up in a big way by Luke’s blade since a lightsaber is effective against all but a few metals. It’s fair to think that once within range, Iron Man’s first attempt to deflect Luke’s weapon would result in sudden tragedy as a limb or another part of his anatomy might go falling to the ground. In a way, a Master Jedi versus a man in a suit, even with plenty of weapons and options to call other suits, would be a bit outmatched. If Luke was just a run-of-the-mill Jedi Knight without the upper-level powers that allowed him to take on insanely powerful enemies, Iron Man might eke out a victory.

But let’s call to mind an image of the Dark Troopers from The Mandalorian, and keep in mind that Luke waded through them without fail. True, Iron Man wouldn’t just sit still and fire one shot after another at Luke, but it wouldn’t make a bit of difference since Luke is a Jedi Master, meaning that he’s become skilled to the point where his skills and level of power could give him several options to end Tony without question. He could Force Choke Iron Man, he could reach out and break Tony piece by piece, he could cause his ARC reactor to malfunction, and he could mess with his suit in several different ways. Luke wouldn’t even have to touch Tony since he could crush him within his metal suit quite easily, as he crushed a Dark Trooper without any real effort. Iron Man could fire everything he had at Luke, and the Jedi Master would either evade, redirect, or block whatever Tony could throw at him. And yet, there’s still one trick that would be even better.

The projection that he used against Kylo Ren might be easier to use from a lesser distance since one has to remember that Luke was using this from across the galaxy in The Last Jedi. It wouldn’t allow him to end Tony, but it would give him the kind of reconnaissance that would allow Luke to learn what he needed to know about Tony’s capabilities. Those laughing and thinking that Iron Man would stomp Luke might need to run down just what the Jedi can do before they come to the belief that Iron Man would be the victor. It would be a good fight, there’s no doubt of that, but Luke would be standing at the end.