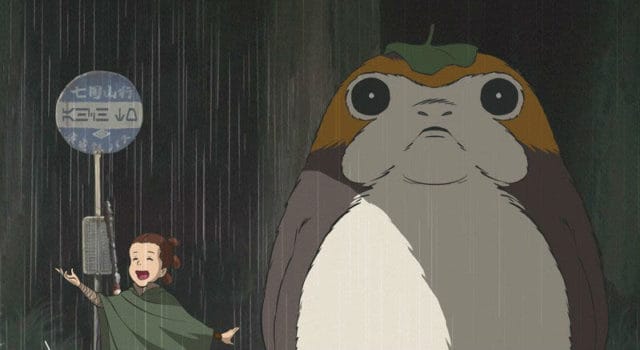 This mashup of Porgs, the newest creature to be inducted into the Star Wars Universe, and My Neighbor Totoro is kind of interesting but unless you know about the latter the former is what you’re bound to fall into in terms of discussion. After all much of this piece is very Star Wars-related just because of the figures that are shown. Granted the scenery is all My Neighbor Totoro, but the Star Wars characters are impossible to not comment on.

Porgs are supposedly small, bird-like things that inhabit the world upon which Luke Skywalker has taken refuge. It’s easy enough to reason why we didn’t see any in the last film since the planet he now resides on wasn’t even shown until the final few minutes. But as it’s been revealed in trailers and in other presentations Porgs will become somewhat prominent in the next movie. It’s been said that realizing that there are entire ecosystems in the universe that have remained untapped as of yet, people responsible for the fictional ecology of Star Wars are just now starting to realize what they can possibly do and the many different directions they can go in.

Plus with the advances in technology they can bring such creatures to life fairly easily. This can give the franchise a new look and a definitely new kind of energy that might go over quite well provided that they don’t go overboard with it.

Remember the Ewoks? Some people liked them while others think that they absolutely ruined the Return of the Jedi. Opinions vary obviously but some people are already starting to think that Porgs might be the next little annoying thing to come along. The creatures of Star Wars never lack for something of interest about them, but at times they tend to get a little too cute for the story or a little too crazy for the franchise. Whether a creature is fully sentient or not seems to make some difference since giving the Ewoks a lot of humanoid traits seemed to bother some people while the fact that the Porgs are, so far, simply a native creature isn’t bothering people that much.

Maybe it’s the human aspect that needs to be left out of nature more often so as to appease humanity. That’s kind of ironic really given humanity’s need to dominate nearly everything we touch. Porgs though might be the attempt that people have been seeking for a while when it comes to a lovable creature that fits the Star Wars mythos and yet is just smart enough to exist but not challenge the other sentient creatures they might interact with.

They certainly aren’t this big aside from mashups, though BB-8 looks like he might be more than a little worried at the size of this one. Of course a lot of droids tend to be scared of a lot of things in Star Wars, almost as if they know that imminent doom is upon them at any moment and around any corner. Granted they’re not all worriers like C-3PO, but they do seem a bit skittish sometimes. 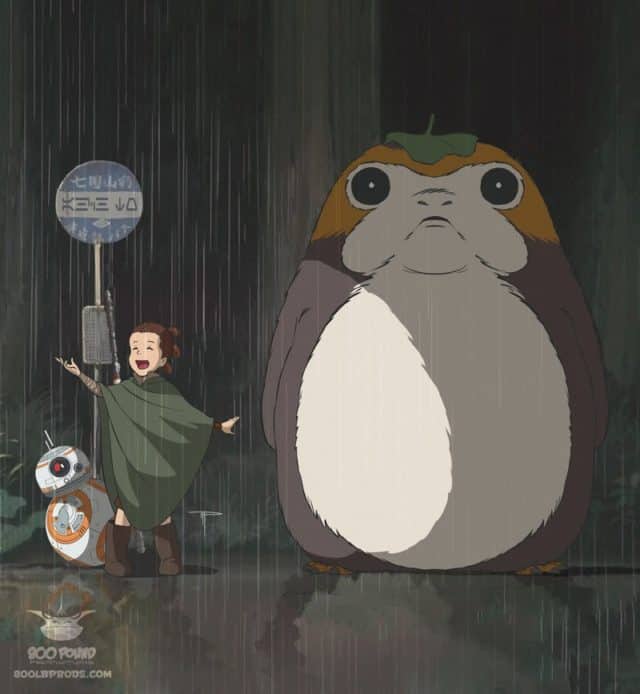