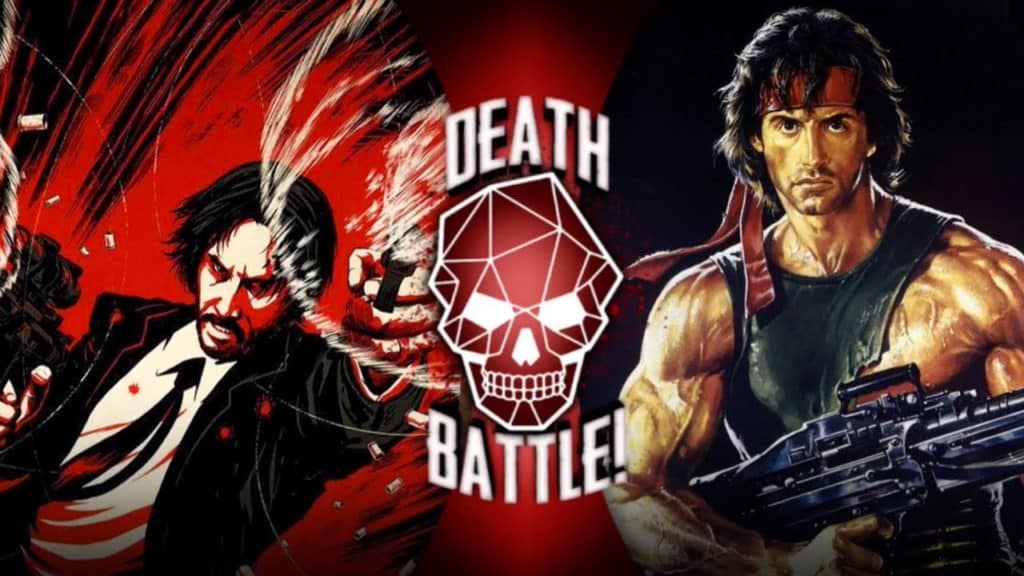 Two killers, both highly trained, and both apparently unstoppable, feel like the type of opponents that might level a city, or a landscape, by the time all is said and done. But despite people chiming in on either side, there are a few important elements that need to be factored in, such as the fact that no one really knows how capable John Wick would be outside of a city setting, and whether Rambo would be as up for the type of urban warfare that Wick is used to. Some might go with Rambo right off the bat since to be fair, the guy is a killing machine that has proved himself many times over and has been seen to be absolutely deadly with one weapon after another. Of course, we’ve seen Wick with guns, knives, and swords, and even pencils, but we’ve never seen him show any kind of skill when it comes to fieldcraft, though his level of planning in an urban setting might be enough to use in a debate to state that he does have a healthy awareness of his surroundings and how to survive.

A fight like this would no doubt come down to the terrain, the reason for the two men being at odds, and the weapons that were bound to be used. In the wild, many believe that Rambo would take this fight without that much effort, though this is debatable given the skill set of Wick. The same can be said of putting the two in an urban setting where Wick is definitely the master and Rambo is a bit out of his element. Some might take a look at the two and assume that Rambo would break Wick into pieces and move on without a second thought, but they’d be discounting Wick in a big way since his fighting abilities have been proven to be on par if not a bit superior to Rambo’s. Putting the two on neutral territory, wherever that might be, would prove to be the real test of their skills and would see who could put their tactical knowledge to the best use.

Where Rambo is more about traps and can sneak attack with the best of them, Wick is trained to look for anything out of the ordinary and has a highly developed danger sense that has saved him more than once in his life. There is a reason that he’s been called Baba Yaga, and it’s something that Rambo would be wise to think about since someone that’s sent to take out the boogeyman isn’t someone that many people would gladly take on. Thinking about why these two would be pit against one another is kind of a moot point right now, but for argument’s sake let’s do the simple thing and say that they were manipulated into fighting each other by rival factions that were trying to eliminate both men. It’s true that this might cause them to ally with one another if they didn’t end up killing each other first, but it would be a seriously impressive test of their skills since when it comes to firepower it’s been seen that both men are fully capable of handling whatever firearms they’re given. Rambo might have a slight edge on non-conventional weapons, but then again, Wick has killed people with pencils and even a book, so perhaps that edge is a bit more illusionary than many would want to believe.

Moving on from the firearms stage it would likely come down to knives or some other handheld weapon, and even then it wouldn’t be decisive since Wick is skilled at swordplay and handling knives, as well as throwing them. He might be able to keep Rambo at a distance for a bit, and even if they close, Wick’s grappling and wrestling abilities would give Rambo more than a spot of trouble. Thinking about this it does feel as though Wick might have a slight edge on Rambo in hand to hand tactics simply because his skill set is a bit more diverse, which could swing things in Wick’s favor for a bit until Rambo’s determination and sheer strength might set the needle back to even.

It’s tough to say who would win since the skill sets of both men are fairly similar, but their choice of terrain differs greatly. After a great deal of deliberation it feels that many people who have commented on this are as close to correct as they can be in stating that in a battle between Wick and Rambo, the terrain would be the biggest deciding factor. Both men are deadly and highly trained fighters that are among the best in their field, and if they met on neutral ground it does feel as though things would come to a draw at some point. But in one setting or another, there would be a definite winner.