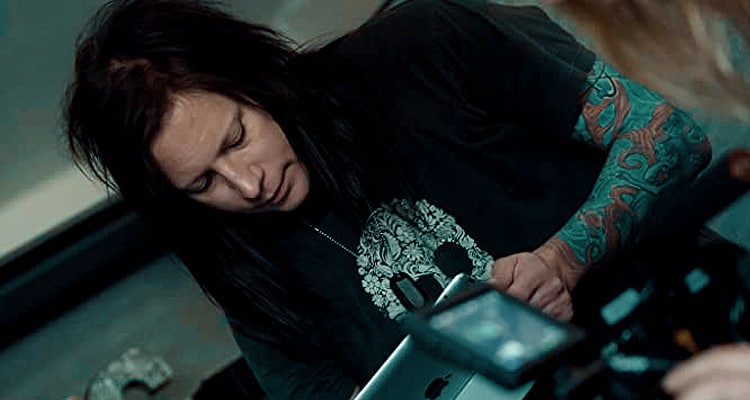 Gene Blalock is a Los Angeles-based director and writer who has directed three feature films – The Nightmare Gallery, Seven Days in Mexico, and Carpe Noctem – countless shorts, and several series, including over one hundred episodes of the somewhat legendary Horror Haikus. An ardent supporter of animal rights and a vocal vegan, Gene is also the founder of the independent film production company, Seraph Films. Gene was born in North Carolina, grew up in Virginia, and went to film school in Chicago before landing in Los Angeles.

Ordinarily, a very private person, Gene agreed to share some surprising facts about himself. Here are five things you didn’t know about Gene Blalock:

1. He Was An Amateur Skateboarder

Long before Gene even picked up his first VHS video camera, he traveled the country as a member of a skateboard team, performing demonstrations and competing in semi-pro events sponsored by the NSA (National Skateboarding Association). With various corporate sponsors, Gene was able to spend a good portion of his high school and early college years, literally just skating through life. One of the highlights of his time traveling was the chance to meet Tony Hawke and his parents, who he described as “really nice people!”

After Gene injured his knee, tearing his ACL, he realized that his potential to compete on a professional level was limited. Instead, he decided to pursue his love of music and study filmmaking.

2. Gene Was A Professional Musician

Gene attended film school in Chicago, at Columbia College, but had quite the hobby both during and after. Indeed, before returning to making films, Gene was a professional musician. Touring the country and recording albums, music is what brought him to relocate from the Midwest to Los Angeles. As a frontman, handling both vocals and rhythm guitar, Gene and his band, The Faded, were known for combining elements of the eighties, nineties alternative and shoegaze, and early 2000’s pop into their own inimitable blend of rock. Gene and his guitarist moved from Chicago to LA to pursue their music careers after the band began working with a producer at Capitol Records. For those first six years, Gene could be found playing regular gigs at the Whiskey, Roxy, and other local and national venues. Gene’s shows featured extensive, choreographed lighting and video, making them more of a multimedia event than a typical rock show and earning his band accolades from the Hollywood Reporter who called them, “The Darlings of the Sunset Strip.” Those early shows allowed Gene to explore his dramatic creativity before turning his attention full time to film.

3. He Grew Up In Foster Care

Entering the foster care system at the age of nine, Gene and his siblings were moved through various foster and group homes. Because of this and his introverted nature, he always felt out of place in school and would spend most of his time alone, reading, drawing, and listening to music. This also engendered deep compassion for others and, particularly, animals who so often had nobody protecting them. As a teen, Gene once confronted a friend about his cavalier attitude towards deer hunting. When his friend replied that killing a deer was inherently the same as killing a cow, Gene couldn’t help but agree – and immediately became a vegetarian (and shortly after, a vegan).

An enormous photo of the Apollo 11’s astronauts hovered above his bed when Gene was just seven years old. He has always been fascinated with the cosmos. Though not a particularly strong math student, Gene follows developments in theoretical physics and string theory with keen interest. Gene’s films often include some reference to such topics as when, in a Letter to Kristen, one character mentions the branching-universe theory.

5. He Spoke At The Knesset In Israel On Behalf Of The Animals

Anyone who has met Gene knows how devoted he is as a long-time animal rights advocate. He speaks openly and passionately about the harms suffered by the voiceless creatures who share our planet. Over the years, Gene has led rallies and protests and helped film and produce countless campaign videos for animal advocacy groups around the world.

Few people know that, because of his work on a documentary about the fur industry, Gene was brought to speak at the Knesset (the equivalent of Israel’s Congress) about how fur is produced. Having to cover up his tattoos and groom his normally untamed hair, he spoke as a counterpoint to the head of the Fur Cancel of Canada at a time when Israel was considering passing laws to ban fur production. While the matter was ultimately tabled, those present were impressed at Gene’s ability to logically present the facts and ultimately sway opinions within their groups.

Gene Blalock is a Los Angeles-based director. He is known for his touching, heart-warming films and his eccentric horror vignettes. Bringing a decidedly human perspective to each of his projects, Gene’s works reflect our common humanity – reflecting reality back as through a mirror of compassion – enabling us to examine and consider ourselves. In every genre, Gene’s work rings true in a thought-provoking way.

Gene Blalock is the co-founder of the independent film production company, Seraph Films. You can also find Gene on IMDb.