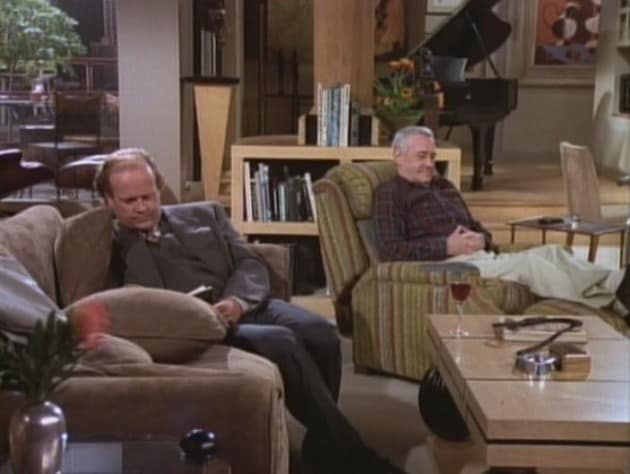 Regardless of whether one found Frasier funny or not, it’s hard not to admire the show’s clear master of its format, both in how episodes were written and performed. For better or worse, Frasier embraced the exaggerated performance and traditional joke structure, familiar tenants the series would often throw emotional wrinkles underneath. And as a precursor to the middle-aged, angst-ridden Golden Age of drama to follow at the turn of the century, much of Frasier‘s wrinkles came in service of its main characters emotional journey, something the show was never afraid to throw into depressing territory. “Space Quest,” the show’s second episode, is an interesting mix of what works and doesn’t work for the young show, displaying some of the aforementioned traits it would later come to be known for, even as it suffers from the typical second episode syndrome network comedies have struggled with for decades.

What’s interesting about “Space Quest” is how its framed: Frasier’s having a difficult time adjusting to his new, crowded life, and can’t find a quiet place to read a psychology book. Simple premise, and one that allows the show to reiterate its pilot, as Frasier goes to more and more obscure places to hide out from his family and colleagues. Each of these attempts to isolate himself allow for one character to enter the scene at a time, making for a neat – if painfully boring and unfunny – recollection of events from the pilot that brought everyone together. Yet by using Frasier’s frustration as the thoroughline between everyone, it streamlines the story in an unexpected way, and neatly delineates in the third act to focus on the show’s most dynamic relationship early on, between Frasier and his father.

At the end of the day, Frasier’s frustrations with other people are misdirects towards his still-harbored frustrations towards his father, and when Frasier forces the two to talk for three minutes a day, it brings their conflict to light. Frasier didn’t just have his father move in to take care of him; he moved him in so they could finally forge the relationship they never had when he was a kid. These things take time to develop, however, and the famous Crane patience shines through with both father and son, their conversation devolving into a mess of insults and accusations – until, after the timer rings, Marty reminds his son why he moved in, and that it’s going to take a lot longer than a week before they have a loving, trusting relationship. As cold as Marty may be, Frasier’s equally bitter and impatient, and his inability to adjust to his new life leaks over into the most important facet of any man’s life, reconciling with his father.

We’ll have plenty of time to talk about Frasier’s Freudian underpinnings throughout the first season; in the show’s second episode, Frasier’s conversation with his father sets an important tone for the series to follow, a well to which the show could return many times, to deliver some of its most thoughtful observations of patriarchal responsibility, and the healing that takes place between a son and father at some point in their adult lives. “Space Quest,” for all its goofy handling of the secondary characters (each other character gets exactly one scene with Frasier), nails that moment, effortlessly establishing an integral emotional component, one that would remain at the show’s core throughout its 250+ episode run.

– Also worth noting: Frasier’s disrupted morning routine consumes the entire first act of the episode, and is a fantastic little mini-play unto itself.

– Total ’90s male fantasy that a woman would be talking on the phone with her mother about her sex life in the extremely frank manner Roz does. Look how liberated those women are!

– Bulldog gets his introduction, complete with signature line: “This stinks! This is total BS! This – oh wait, there it is.”

– Frasier is always great at the little touches, like the dialogue about the building custodian with a glass eye. “Which one is the real one?” “The one that’s brown.”