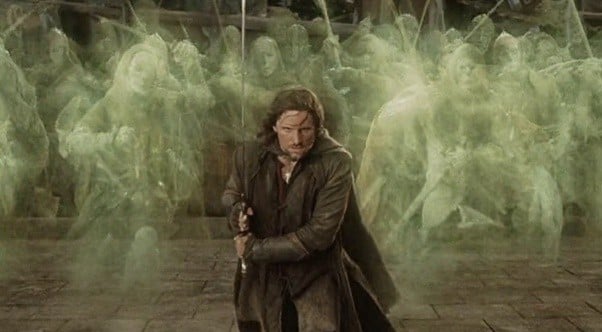 Some folks loved The Lord of the Rings, others didn’t care for the trilogy that much. It was a long three movies to be fair and it had a great deal of prose that became exposition thanks to Tolkien’s books being such long and drawn-out affairs. But the story was a powerful epic that had a lot of people believing in the magic that was captured on screen, and it’s fair to say that the actors did a great deal of work to bring the characters to life and help the story along. There were definitely moments that were just ‘meh’ throughout the trilogy, but there were many powerful and epic moments that were hard to miss. But then there were moments when it was clear that people would have done something far different or seen something taken out since the practicality of a scene just didn’t make a lot of sense and it’s possible that another opinion could have been used to make the movie a little easier to believe. Even with fantasy, it’s nice to have realism take the front seat every now and again.

Here are a few things that people might have liked to see in the movie.

5. The fact that Isengard was still standing for so long when burning wood could have easily traveled to the Ents from that distance.

It’s true that the Ents have a very slow reaction time when they’re just shaking off the lethargy, but when they’re good and riled it’s obvious that they don’t waste any time. That’s why the burning of their fellow trees and the woodsmoke would have likely rallied them to action unless they were somehow dormant for all that time. This is hard to believe since the moment that Treebeard sees the clearing there’s no doubt of his shock and then his anger as he howls and calls for his fellow Ents to join him. So why in the world didn’t that happen before the Uruk-Hai were gathered in such numbers?

4. The sketchy way the eagles only show up in the most dire of circumstances.

Has anyone noticed how the eagles only show up when the situation is just about hopeless? When Gandalf needed a lift off the top of Isengard, or when Frodo and Sam needed to be rescued from Mount Doom, or even when the Nazgul were attacking the band of soldiers trying to distract Sauron and his minions from Frodo and Sam? They could have easily carried Sam and Frodo to Mount Doom in far less time than it took for the fellowship to make their way there on foot, but nope, the eagles come when they decide, and that’s that. It’s convenient, to say the least, but it’s also worthy of an eye roll.

3. The utter surprise from Gimli concerning the fate of Moria.

So obviously it can happen that a person might lose track of their kin in a world this big and with the idea that going from place to place might take a while. But not getting word that an entire stronghold has been taken over, or not realizing that any lack of word as to how the place is doing, feels kind of suspect. Gimli should have known from the moment they were unable to get in the moon door so easily that something was up since when it comes to fantasy, dwarves are usually pretty knowledgeable about their kin and how they go about sealing up their homes, and why. Something should have triggered his alarm before that point.

2. The obvious flaws in Helms Deep.

Isn’t this the responsibility of the military leaders, the tacticians, and even the king? A stronghold that has hidden passages and openings is all well and good, but how in the world did the Uruk-Hai not see Gimli and Aragorn coming and prepare accordingly? Plus, think about this, if the engineers had been smart enough to find a way to dig a tunnel under the wall and secure it somehow, then there wouldn’t have been an opening for the orcs to shove a bomb into so that the wall would explode. Granted, Theoden and his people didn’t know about the black powder bomb, but when the enemy is camping out at the base of your wall you’ve got to think that something’s up.

1. Eowyn’s destruction of the Witch King.

Not only was it predictable, but it was a bit limited in its scope since Gandalf took on a Balrog and defeated it when he was weaker, and he wasn’t technically a man, and neither was Merry, who actually wounded the Witch King. Had this scene been a little more impactful it might have worked and people might have left it alone, but as it stands, the battle between Gandalf and the leader of the Nazgul would have been a lot more impressive. No offense to Eowyn, but she was kind of a poor fighter.

There are a lot of other moments, but these kind of stand out.