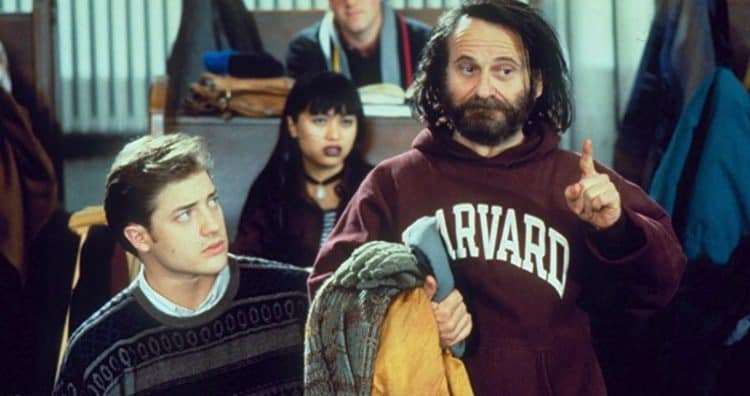 When you think of the word Harvard you tend to think of a place that’s only for the most elite of the elite, the brainiacs, the super-intelligent and ultra-rich individuals that seem to have it all going their way. But honestly, despite Harvard being considered one of the most prestigious colleges in the world, it is still a place that many feel is a bit pretentious for its own good. The halls of academia are found throughout nation in just about every school in some way, and regardless of its outstanding reputation Harvard is just one more school, as blasphemous as that might seem to some that look down upon state colleges or smaller universities. Let’s put it this way, having attended and graduated from Harvard looks great on a resume, but unless you really learn something and can apply that fancy education you’re no better off than the next person in line waiting to see if their money was well spent.

Here are a few movie scenes dealing with Harvard and what it means to really get the experience.

Any person that directed a movie like this nowadays would likely be crucified on social media simply for daring to put a white man in blackface. Now that that’s out of the way, the whole reason why C. Thomas Howell dared to go so far in the first place was the understanding that as a young black man he could have most of his Harvard education paid for due to a specific scholarship. The only problem with this is that most upperclass white men have no idea what it means to come from black culture and would surely be just as awkward as he was in this film. The stereotypes are horrible but for the time period it was, well, memorable, but still absolutely horrible. Plus, listening to him rattle off the costs of Harvard is amusing since the entire cost of four years at Harvard that he quotes would probably only purchase a single year at this time.

Elle doesn’t seem like a snob or the kind of person that would hang around with the snobs but at the same time she seems like she could make friends with just about anyone if they’re open enough and willing to put up with the character quirks she comes with. To be honest she seems like the typical college woman in that she’s bright, ready to learn, and in way over her head from the start. The one thing irritating about any college movie is that a lot of the kids either seem way too amped up and ready to suffer a psychotic break, or they seem happy and well-adjusted and not at all on par with what the current college experience really is. It’s basically what you make of it, no matter if you’re attending Harvard or community college. Oh my, did I just use those two in the same sentence?

Want to know how some people get through college? It comes in a pill form most often and is followed by something that comes out of a bottle on a regular occasion for some folks. The elite of Harvard are not perfect, no matter how elegant and intelligent they might seem. They’re human just like everyone else and like any other human they tend to have issues at times. Of course the movies use a healthy helping of drama to push this point through and go over the top when many people would state that it’s not really what happens. But trust in this, the average college student is feeling stressed a good portion of the day when they’re at school over one thing or another, and there are a lot that will turn to alternative methods of stress relief, be it alcohol, drugs, or something else.

Let’s say this, Zuckerberg came up with a revolutionary idea that was meant to draw a lot of people closer and allow them to stay in touch. That’s the pleasant version. But he also made a few enemies on the way up, as was to be expected since you don’t tend to become popular without having a few detractors around to try and knock you down a few pegs. One thing about this movie however is that it’s been highly criticized for not being accurate and not being quite fair to those that are represented in it. But seeing how things are going with Facebook now it kind of seems as though Zuckerberg, who might have known what he was doing from the start, is at this point attempting to dam a river of his own making and having limited success.

It doesn’t feel right to bash any institution unless there’s a good reason, but it’s very easy to bash those professors and educators that believe with their pedigree and their level of intelligence that they’re simply right no matter what comes out of their mouth. When a bum off the street can display more wisdom than someone that has been a professor for years and forgotten just what it means to be on the outside of the system then it becomes clear that the system needs to change instead of remaining static and unyielding to the changes that go on around it. There’s no doubt that Harvard is still a fine institution that keeps with the times, but it’s also important to make certain that its educators share that sentiment.

Education after all is a fluid thing, and changes continually, otherwise we don’t learn, we repeat.