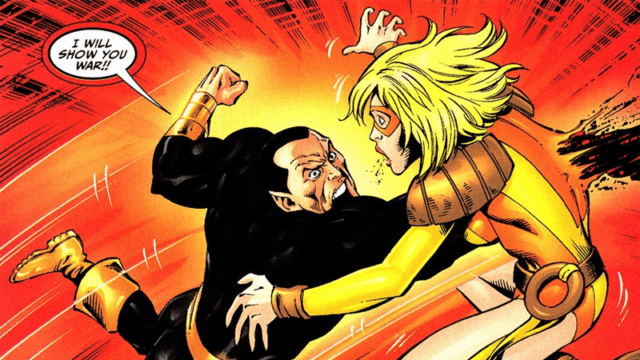 Black Adam is perhaps the single most famous opponent of Captain Marvel, serving as a sort of mirror because of his status as the superhero’s predecessor. The role has been cast for some time in the DC Extended Universe, but it is still fun to think about the people who could have been cast in the role. A powerful build is needed for a supervillain who is supposed to possess the strength and stamina of ancient Egyptian gods, but at the same time, Black Adam needs to look as though he has a brain to go with his brawn.

Here are five examples of actors who could play Black Adam:

Gerard Butler’s role in 300 suggests that he is more than capable of playing a role as theatrical as that of Black Adam. Furthermore, he strikes a neat balance in that he is famous enough to bring in potential viewers but not famous enough to overshadow his role. With that said, there is a serious problem with Butler in that he looks nothing like an ancient Egyptian, but speaking bluntly, the chances of Hollywood actually casting someone who looked like an ancient Egyptian as an ancient Egyptian character are abysmal, as shown by the fact that Butler was chosen to play Set in the poorly-received Gods of Egypt.

Dave Bautista tends to be better-known for his career in professional wrestling as well as mixed martial arts, but it is important to note that he has appeared in a remarkable number of movies as well. For example, he played Brass Body in The Man with the Iron Fists, Mr. Hinx in Spectre, and Tong Po in the Kickboxer reboot. Furthermore, he even has experience with superhero movies because of his role as Drax the Destroyer in the Guardians of the Galaxy movies.

Terry Crews was a NFL player, but has since shown up in a wide range of productions in a wide range of roles. As a result, while he tends to be best-known for his comedic roles, he is more than capable of playing other roles as well. On another positive note, Crews has the musculature needed to play Black Adam in a convincing manner, which is perhaps unsurprising considering the Terry Crews memes that are floating out there on the Internet.

Jason Mamoa could never play Black Adam for the simple reason that he has been chosen to play Aquaman in the DC Extended Universe. However, if he had not been chosen for said role, it is not difficult to imagine him playing the supervillain on the movie screen considering his physique as well as his presence on the movie screen.

Ultimately, Dwayne Johnson is probably the single best choice among the actors who could have been chosen to play Black Adam in the DC Extended Universe, which makes his casting a fortuitous one indeed. However, one can’t help but wonder whether Johnson might have been even better as Captain Marvel, seeing as how he possesses an enthusiasm that would make him well-suited for playing the superhero’s particular circumstances. Regardless, he possesses the right combination of characteristics to play Black Adam. In fact, one could even say that Johnson has previous experience playing magical, ancient Egyptian supervillains with an occasional anti-heroic streak, seeing as how he did play the Scorpion King at a much earlier point in his movie career.