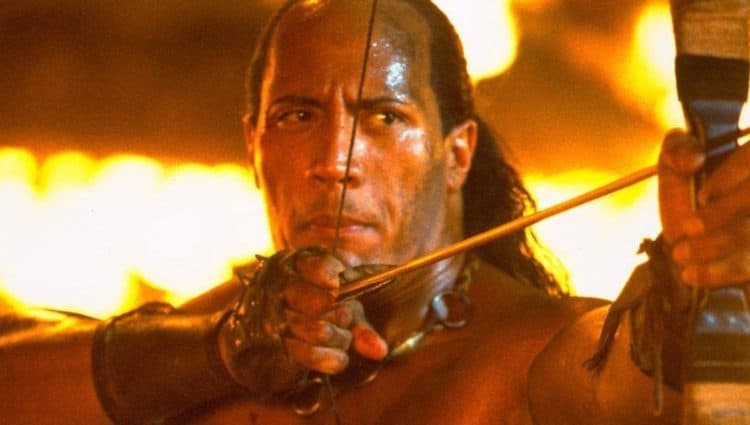 The first time I ever saw Dwayne “The Rock” Johnson, it was in The Scorpion King. In my opinion, that’s rightfully so. That was his first movie where he was the lead and if you ask me, it was the perfect introduction. Now technically, The Scorpion King is a part of The Mummy franchise. However, I do find it really hard to connect it to that franchise, because it simply doesn’t fit. First of all, Dwayne Johnson doesn’t fight any kind of mummies, he fights regular people. The biggest fantasy element of that movie was the Sorceress played by Kelly Hu. There was a lot of action, just like The Mummy movies, but the critical difference was Dwayne Johnson’s presence. The man just adds that sense of fun to anything he enters. Plus, try comparing his physique to that of Brendan Fraser’s. Yeah, there really is none.

My point is, when Dwayne Johnson (at that time, he only went by The Rock) first appeared as The Scorpion King in The Mummy Returns, he was a villain. The lame thing about that was he was mostly a silent villain who was half-man and half-scorpion, hence the name. That actually sounds kind of cool on paper, but what we saw on screen was a half-man and half-scorpion monster with The Rock’s face… all in the form of some very, very awful CGI. Man, that really killed it for me. That’s why I don’t really consider that movie The Rock’s breakthrough role. It’s also why I don’t really consider the first Scorpion King movie to be a part of The Mummy franchise.

To me, it gives a different vibe and a lot of that has to do with The Rock. Think about this way, The Mummy Returns portrayed him as a power-hungry tyrant, while The Scorpion King portrayed him as a beefcake action hero. Doesn’t really flow too well, does it? Well, I just forget about that by watching The Scorpion King as a standalone action film. I think of it as Dwayne Johnson’s breakthrough role that put him on the map as a bankable action star. Heck, this is when people who weren’t pro-wrestling nuts got a taste of The Rock. I didn’t even call him by his actual name back then.

After the first one, The Scorpion King has been reduced to a few direct-to-video sequels. I’ll be honest, I haven’t watched them. I did make a few attempts, but they just didn’t grab me. I just remember one of them has Ron Perlman, another has Randy Couture, and the latest one has Zach McGowan from Black Sails. How many Scorpion King movies do we even need? There is one reason why the sequels weren’t nearly as good as the first one: Dwayne Johnson wasn’t in them. He carried that first movie on his shoulders like he probably carries his weights. That role is his and when the other actors tried to carry on the Scorpion King mantle, it just wasn’t the same.

Where am I going with all of this? Well, I just read this morning on Deadline that Dwayne Johnson himself will be revisiting The Scorpion King, but not in a sequel. Based on the report that I read, Johnson will be producing a reboot of the franchise. The report also didn’t confirm whether or not he would be reprising his role as Mathayus. If that’s the case, then I’m not really interested. The direct-to-video sequels are proof that these movies cannot work without The Rock flexing his muscles. On top of that, why would he even want to revisit the franchise? He’s got to be the busiest guy working in Hollywood today, so I wonder why he would want to go back to something that’s so far behind him.

Well, Dwayne Johnson himself commented on why he wanted to revisit it and his answer was actually pretty satisfying. He’s well aware that The Scorpion King is the movie that launched his career and gives it all the credit for where he is today. I mean, he’s not wrong. By now, he’s got to be the biggest star in Hollywood and is at the point where he can ask for anything. So if you’re a fan of Dwayne Johnson, you should certainly cherish The Scorpion King.

Johnson’s response on revisiting the franchise actually made me think about whatever reboot plans he has in mind. He clearly has an emotional attachment to The Scorpion King, rightfully so. It’s his first movie where he’s the lead, and it made everyone recognize his talents as an action star. My only problem is him not actually being in it. I always enjoy watching him kick some butt and toss bad guys around, but it seems he won’t be doing that in the form of Mathayus again. Like I said, I originally thought that was a lame idea, but then I did some thinking.

Dwayne Johnson has shown some serious commitment to whatever projects he’s attached to. Not only does he play a big role in those projects, but he also has a major creative say in them. Whether it be the Fast & Furious franchise or especially the upcoming Black Adam, his level of commitment is through the roof. He doesn’t pursue a project unless he’s absolutely comfortable with the story and will make sure it’s the best it can be. And when he acts, he’s always as big as a flippin house. Can we actually expect a cameo in this upcoming reboot?

All talk about his monstrous physique aside, I’m confident that Johnson is pursuing this Scorpion King reboot because he’s adamant that he can make something entertaining. I believe he’s adamant because he has such a serious emotional attachment to The Scorpion King and wants to give some of his own creative take on it. Does he really have to be in it? My first thought would be yes, but he can change my mind. He sounds committed to it, and that’s the first step. The next is actually giving us something that’s entertaining. When it comes to entertainment, he very rarely fails. Ultimately, I’m just very curious to see what he has in mind. I say we give him the benefit of the doubt.