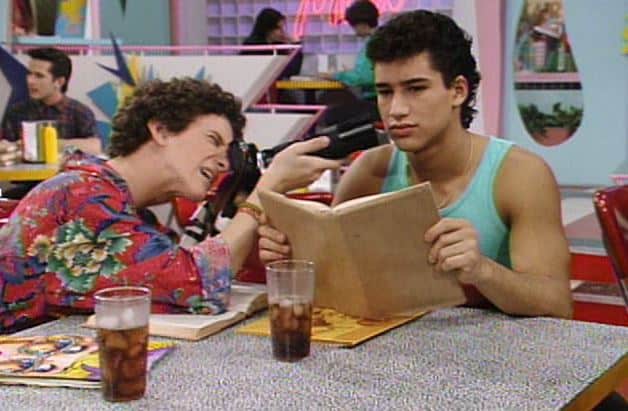 Where you wondering where Dustin Diamond and Lark Voorhies were when you watched the Saved by the Bell sketch on The Tonight Show Starring Jimmy Fallon? If you are like most fans of the popular series that ran on NBC from 1989 to 1993, you probably did not care. Shortly after the awesome sketch aired on Fallon’s talk show, Voorhies made an announcement that scheduling conflicts made her unable to appear with former co-stars Mark-Paul Gosselaar, Tiffani Thiessen, Mario Lopez, Elizabeth Berkley, and Dennis Haskins. That seems pretty shocking considering Voorhies’ career has been almost non-existent in the last several years. Then a few days ago, Diamond went public about why he was not on the show. He claims he was never even asked to be a part of it, which may have to do with his recent episode with the law. Over the last several weeks we have been binge-watching episodes of Saved by the Bell so that we can share with you our favorite episodes from each season. We’re now up to Season 3, so, without further ado, here are our picks for the best episodes from Saved by the Bell’s third season.

It is unfortunate that Elizabeth Berkley is a no-show in this episode as having Jessie participating in these crazy antics with Zack, Kelly, Slater, Lisa, and Screech would have made it even better. Berkley was missing from several episodes of Saved by the Bell after injuring her knee while filming another episode of the series. This just happens to be one of the episodes she had to be written out of during that time. Fun fact: If you rewatch some Season 3 episodes, including when the gang works at Malibu Sands Beach Club, you will notice a band aid on Berkley’s knee from the accident.

In this episode, the gang tries to acquire U2 tickets, and has Screech sleeping overnight in the mall. He is close to the front of the line, but ends up losing his spot to ask Zack and the rest of the gang what section they would want to sit in at the venue. By the time he makes it back in line, all the tickets are sold out. However, there is some luck. Due to popularity, U2 has agreed to hold another concert! During this time, the gang finds $5,000 and Zack think the best idea is to buy a large number of tickets to the concert and then scalp them. While hanging out at the mall, they notice that they are being followed by two creepy looking men. In order to hide from them, the gang spends the night in a sporting goods store, destroys a shoe store, and dresses up as a wedding party (more foreshadowing for Zack and Kelly getting married). It turns out the whole thing is being video taped for a Candid Camera type show. And the gang ends up getting their tickets to U2 after all. A completely ridiculous plot, but that is when Saved by the Bell is at its best.

Zack: He was born. Need I say more?

Slater: Look. I am sorry, Kelly. He accidentally stepped out of line and lost his place.

Kelly: Because Lisa’s gonna kill him and I’m gonna have bad thoughts.

This is considered the season finale for the third season of Saved by the Bell. Like the previously mentioned episode, this one also involves a crazy plot. Lisa wins a radio contest that allows her to conveniently bring five guests with her to  a murder mystery weekend. Even though she cannot stand him, Lisa invites Screech as one of her guests. Things are going great and everyone is having a grand time, until it appears that there is an actual killer on the loose. Everyone begins to worry, especially Zack, as someone is making it out to be he is the killer. This sounds like a stupid episode, but like I mentioned before, completely ridiculous plots are what makes Saved by the Bell a cult classic.

Since there is a “real” killer on the loose, everyone is sent to their rooms to pack their belongings and head home. Lisa ends up disappearing and Zack is blamed yet again. Even his closest friends think it may be possible he is a killer. In the end, Zack proves he is the smartest person in the room and solves the mystery, including the disappearance of Lisa, who was in on the prank the entire time. After all, Zack did score a 1502 on his SAT’s, so it should not be a surprise to anyone that he solved a fake murder.

Screech: Lisa, don’t drink that! It might be poison.

Lisa: You’re right. You drink it.

Here is another example of teenagers getting into trouble. Instead of always depicting the teenage characters of Saved by the Bell as goody-goodies, there were several episodes that showed them doing something wrong. That is the case with this episode. Zack meets a girl named Danielle at The Max. She is having car trouble and Zack is there to save the day. She is in college and invites Zack to a local club called The Attic. The only problem is you have to be 18 to get in the club. Luckily, the gang is taking a photography class this week and Screech is able to make the guys fake IDs. The girls end up finding out and want to join in on the fun. During their first visit, the guys see Kelly’s boyfriend Jeff there with another girl. He ends up being there again when Kelly shows up. She dumps him and is devastated. That’s what you get for dumping Zack Morris, I guess. Zack’s mom comes to spoil the fun and so ends another great episode of Saved by the Bell.

Mr. Belding: (to Zack, Slater, and Screech who are sleeping) I said notice the use of SHADOW AND LIGHT

Zack: Yes! Shamu has an overbite.

Slater: She’s a whale of a woman, sir.

What was your favorite episode from the third season of Saved by the Bell. Let us know in the comments section below.