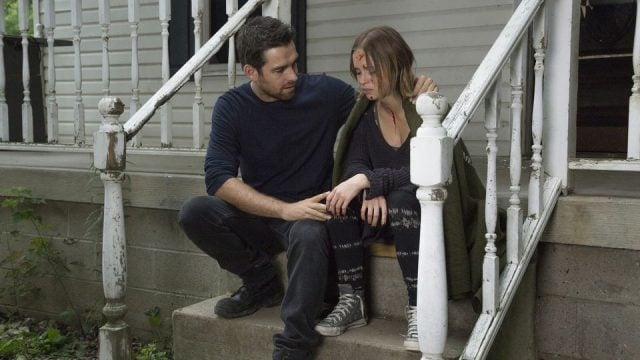 Opening with a satanic self-immolation and a rape scene, “Only One Way A Dogfight Ends” certainly doesn’t get off to a promising start, immediately highlighting two of the season’s most problematic characters and stories. There really couldn’t be a more disheartening way for the episode to begin than with ten minutes of female victimization – but as a whole, “Only One Way” is probably the strongest episode of the season since “Job”, the rare example of Banshee being able to elevate itself above the serial killer/angsty Nazi narratives and find some of that ol’ Banshee magic – and as I posited on the Under the Hood podcast a few weeks back, it all begins with the return of Deva.

Though I’ve often lamented Deva’s stories, the importance of her presence on Banshee could never be understated. Her surprising return halfway through this episode immediately accelerates the emotional stakes for Carrie, Job and Hood: Carrie’s war with Proctor is putting innocent lives in danger, with implications so far-reaching, even she can’t comprehend (but gets a taste of, thanks to the Cruz-led assault on her home in this episode). Bringing Deva back into the fold so late in the run might end up leaving the story left a little undercooked, but there’s no denying the power of the moment Carrie and Hood share in the driveway afterwards, once her and Job’s primordial instincts to kick ass have subdued, and the gravity of the situation sets in. Silently, both Hood and Carrie have to recognize their failures in letting Deva’s life turn out the way it did, a vagabond who breaks into the house for food, an endeavor that turns into her indoctrination into the deadly lifestyle of her parents. One of the many things Banshee has done well is demonstrate the domino effect of the decisions we make in every facet of our lives, and “Only One Way a Dogfight Ends” taps back into that for perhaps the first time this season, in a way that feels more meaningful than plot devices or cheap character callbacks.

A lot of the rest of “Only One Way” benefits from this heightened emotional state: Proctor’s attack on Carrie, coming right as the Brotherhood is ripping Proctor’s entire drug business out from under his feet, put a number of Banshee‘s central players in interesting positions for these final two episodes. It appears Banshee is heading towards a finale focused on two stories: Hood’s attempts to rescue Agent Dawson (more on her in a minute), and Proctor’s attempts to save his own empire, which both develop in intriguing ways in this hour. The latter is louder and more obvious, thanks to the classically brutal “sparring” match between Cruz and Carrie (and don’t forget: Deva murdering a dude in self-defense) – but the former stands to have a larger impact in this final season, helping to give some depth to what’s been the show’s worst story line ever.

Yep, it’s time for our weekly look into the Satanic darkness of Declan: which begins with him supposedly convincing a girl to light herself on fire in the bullpen of Banshee’s police department, and ends with his girlfriend (who also had him arrested for statutory rape 15 years ago? Lot of rape going on in this episode) taking Agent Veronica Dawson hostage, set to be Declan’s latest sacrifice to the Devil (a twist that doesn’t necessarily feel all that surprising, given how obvious the parallel between her physical appearance and the description of his victims to this point). The only real reason this works is how Banshee plays her connection to Hood: my fears that Hood would immediately bed Dawson were alleviated when Hood begins having flashes of his passionate nights with Siobahn (in turn redeeming some of the show’s most nakedly horny material, and giving it some real emotional context it didn’t quite have back then), and ends up crying in Dawson’s naked arms until he falls asleep. That is a true Banshee moment, a glimpse at the emotionally raw, sexually charged energy this show delighted in previous seasons, and an examination into the traumatized mind of its central character, a dark, welcome return to the show’s dark, pulpy roots.

Hood’s scene with Dawson might be the most promising scene this show’s offered all season; once it’s paired with Proctor’s mesmerizing showdown with Carrie in the courtroom, “Only One Way” comes alive in a dynamic way, sitting in stark contrast to the meticulously slow-paced letdown much of the previous five episodes (save for most of “Job”) have been. And yet, with only two episodes left, does Banshee have time to see all these threads through? Just when Dawson’s becoming an interesting character, she gets pulled into damsel in distress status, eliminating any chance we have to explore her understanding of Hood any further (she sees through him in a way only Carrie can, after all), given that there’s only two hours left of this show (which has to make any Fanshee sad, even if you’ve been as disappointed with this final season as I). And just as Deva returns, the war with Carrie and Proctor is blowing up, pushing the stories of Carrie’s family and Job’s recovery into the background as the louder, more dramatic moments of the season prepare to take center stage.

If only for an hour, however, Banshee felt like it was returning to its roots, understanding that the mix of pulp, nudity, and emotional scars requires a certain touch to be applied effectively, a careful recipe Banshee‘s thrown into flux this season, with the added ingredients of Declan and Calvin into the mix.  And there’s certainly parts of “Only One Way” that still feel off, be it Declan’s weak threats towards Brock or the complete reduction of Rebecca’s importance in this final season – but there’s an undeniable sense of energy and propulsion with “Only One Way”, and one that comes with some touches of character and visual flourish that feel like the Banshee we’ve known and loved for three seasons. Here’s hoping these final two hours send the show off in proper fashion.

Banshee Season 4 Episode 6 Review: "Only One Way a Dogfight Ends"