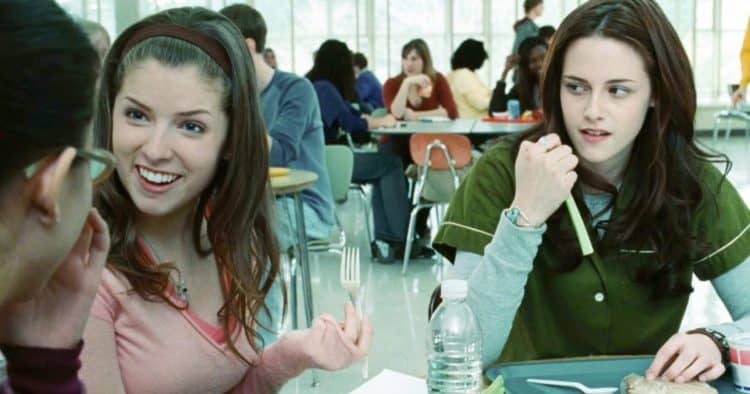 It’s easy to be ‘that person’ that happens to live in a location that an actor says was absolutely miserable to shoot in and takes offense to said actor complaining about the conditions, but it’s just a easy to step back for a minute and say ‘meh’, especially when it sounds like so much whining. Anna Kendrick taking the time to explain how shooting the movie Twilight in the Pacific Northwest was like a ‘hostage situation’ as it’s been stated in MovieWeb and many other publications is enough to make a person laugh really. It’s kind of like someone shooting a movie in Alaska and saying its cold, or in a desert and saying it’s too hot. Granted, there are conditions under which weather conditions can be seen as kind of an annoyance or even a serious hindrance, but in this case it does sound quite a bit as though Kendrick is whining over something that many PNW residents find to be a minor inconvenience if they even think about it at all. In terms of getting along with everyone on the shoot it does sound as though this was fairly normal as some folks mesh with one another and others not so much. But likening it to a hostage situation and then going on to explain how the weather affected her mood is a bit, well, childish.

It’s very possible that her words are being taken out of context, and that’s kind of the hope since otherwise in just about every publication they show up in she sounds like a whiny teenager describing the conditions in Oregon without a single idea of what she’s talking about. Yes, the PNW is definitely a wet area and we do tend to get a good amount of rainfall at times, though it’s not nearly as much as other parts of the country and our flooding issues come and go but haven’t been that bad in recent years. Yes, it can get a bit chilly here and dampness is a bit of an issue. But the whole idea of being an actor is that you go where the gigs are, you adapt to your surroundings as much as possible, and you try to avoid categorizing a given area just by your limited experience. Like it or not, plenty of Oregon residents get by just fine with the overall climate, which changes depending on what part of the state a person is in, much like many other states. For Kendrick to liken her time on the Twilight set to a hostage situation and even imply that people were uncomfortable might actually cause more eye-rolls than sympathy pangs since in truth it does sound as though she got a little wet, a little cold, and decided that Oregon just wasn’t for her. That’s kind of funny coming from someone who was born in Maine, which is eerily similar to a state that’s separated from it by an entire continent. But oh well, that’s her prerogative to complain just as it is for anyone else.

It’s very difficult to have any sympathy however since this is the life she signed on for when she became an actress, and being a little uncomfortable to earn a payday is something that many upon many people go through on a daily basis, and in many cases those making far less than she does are far more uncomfortable and would prefer it to be otherwise. That could be why this matter sounds a bit ridiculous to the ear, especially when it’s being given this level of importance and has enough people talking about it to be noticed. Anna Kendrick has gone on to have a great career at this point and has become a favored actor of many upon many people. But again the hope is that someone decided to take her words out of context or that she spoke without thinking since likening a trip to any state to film a movie to a hostage situation in this day and age is poor wording and will likely offend someone out there. Personally it’s worth a shoulder shrug at best and the thought that Anna isn’t an outdoors type person. That could be wrong or right since it’s not really known for certain but at the same time complaining about a shoot that paid her a good amount of money and definitely helped to elevate her career is kind of, well, disingenuous at best. It’s easy for a lot of folks to forgive this wording since not only are a good number of them fans, but they’re likely thinking that she might have selected the wrong words for something that wasn’t quite as bad as she was making it out to be. It’s odd how words come back to bite us, isn’t it?