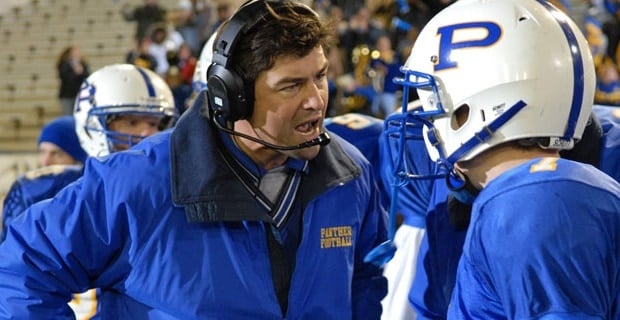 Friday Night Lights is one of the greatest shows of recent time. The show struggled to stay on the air for two seasons before NBC decided to strike a deal with Direct TV that allowed the cable provider to air fresh new episodes of the series before NBC would air them later in the year. The tactic worked and the drama, that starred Kyle Chandler and Connie Britton, was able to last for 5 glorious seasons. There may be a lot of fun facts you have never heard about this classis series. We at TV Overmind decided to do a little research and unearth some of these tidbits for your reading pleasure. And hey, we got to watch a few episodes of one of our favorite shows while doing it.

1. Connie Britton and Brad Leland both starred in the movie

Connie Britton, who plays matriarch Tami Taylor, and Brad Leland, who starred as car salesman Budd Garitty , on Friday Night Lights both starred in the movie from which the television show was based. Britton’s character was named Sharon Gaines and was married to the town’s football coach, while Leland played John Aubrey, a huge supporter of the high school football team. Much of Britton’s role was cut from the final version of the movie so she was adamant to star in the series. The producers assured her that she would get a beefier storyline and they were right! Peter Berg directed the movie and the first episode of the television series.

2. NBC tired to make a show before the movie

NBC wanted to make the television show Friday Night Lights long before the movie was ever made. The novel scribed by Buzz Bissinger came out in 1990 and it was shortly after its release that the Peacock network wanted a piece of the action. When NBC failed to obtain the rights to the book, they decided to develop another TV show devoted to high school football. It was called Against the Grain and aired for 8 episodes during the fall of 1993. Ben Affleck, Denise Richards, and Michael Cudlitz all starred on the series.

3. Kyle Chandler was not the 1st choice to play Coach Taylor

It is hard to picture anyone playing Coach Eric Taylor other than Kyle Chandler, but producer Peter Berg did not want him for the role. He claimed that Chandler was too good looking to believably play a high school football coach. Berg originally wanted country singer Dwight Yoakam in the role, but he wanted more money than the network was willing to offer him. Chandler showed up to audition riding a motorcycle and hung over from playing poker with his friends. When Berg saw him like this, he knew he had found his Coach Taylor.

4. The teenaged characters were not played by teenagers

Most television shows do not cast the parts of teenagers to those under the age of 18. This has to do with child labor laws only allowing minors certain times to work. The same practice holds true for Friday Night Lights, however many of the actors playing the parts of teenagers were quite a bit older than 18. Taylor Kitsch was 25, Zach Gilford was 24, Minka Kelly was 26, and Adrianne Palicki was 23 when they all began starring on the series. However, Jesse Plemons was 18 and Aimee Teegarden was only 17 when the series began.

5. Lindsay Lohan could have been on the show

Back in 2006, Lindsay Lohan was still a hot commodity. She had just starred in Mean Girls, Herbie Fully Loaded, and Bobby and had proven to be bankable actress. She was the first girl to be offered the role of Tyra Collette. Thankfully, the actress did not take the role because shortly after the series debuted, Lohan headed into a downward spiral of drugs, alcohol, and jail time.

Friday Night Lights was never a real ratings contender, but it was always a critics darling. The show was even loved by Emmy voters as it received numerous awards and nominations. The series would win an Emmy in 2007 for Outstanding Casting for a Drama Series and Kyle Chandler would win in 2011 in the category of Outstanding Lead Actor in a Drama. Jason Katims also won an Emmy in 2011 for penning the series finale. Britton was nominated in 2010 and 2011, but did not win.

7. Taylor Kitsch got sick on set

Tim Riggins was usually drunk and puking on any given episode of Friday Night Lights, and at first so was the actor that played him. Well, sort of. Taylor Kitsch became ill while filming during the first season, because the home that was the setting for the Riggins homestead smelled and was full of mold. The swimming pool even had sludge in it. Kitsch admitted that a doctor came to the set and urged them not to film in the house because it was a hazard to their health.

8. Having fun after the finale

Once the final scene was shot of the Friday Night Lights finale, the cast and crew decided to have a few beers and socialize at a bar called Midnight Rodeo which is located in Austin, Texas where a majority of the series was shot. Once the bar closed, everyone proceeded to go to one of the football fields where many episodes were shot and played a game of flag football.

Friday Night Lights decided to go in an entirely new direction for the series’ fourth season. Coach Taylor would become the football coach of East Dillon High and many of the show’s lead actors (Minka Kelly, Adrianne Palicki, etc.) ventured off to new acting roles, but would still appear on the show from time to time. In order to fill their void, the show cast several new actors and had each one audition with Taylor Kitsch. The actors that could hold their own against him in a scene were offered a role on the show.

10. Not Everyone knew how to play football

While most of the actors that had to play football on the show had previous experience playing the sport, that was not the case for everyone. Gaius Charles, who played Brian “Smash” Williams for the first two seasons of Friday Night Lights was a horrible football player. While growing up, the actor was a track star. This athletic ability, plus his strong acting skills, helped him win the role.

Know any other fun facts about Friday Night Lights? Let us know in the comments section below.