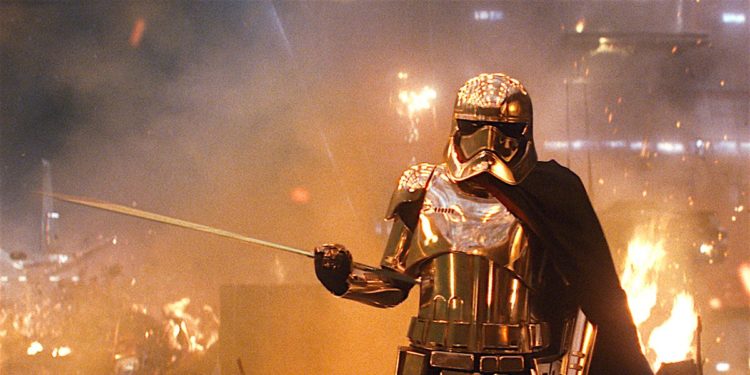 The Last Jedi was maligned in a lot of ways and sadly, it earned a lot of them no matter that people, some at least, have since flipped and adopted the idea that they ‘didn’t see the intricate details within’. Yeah, folks can keep telling themselves that, but there were quite a few things that Rian Johnson did that made little to no sense as it felt like he’d seen a single Star Wars clip and felt that he had it down pat. Instead of going on a tiresome rant to vilify Johnson, however, it’s fair to say that The Last Jedi was the culmination of one character’s arc who didn’t get nearly enough screen time despite being one of the supposedly more impressive characters in the story. Captain Phasma might as well have been another stormtrooper in the First Order for all the respect she was given, especially since she was taken out by Finn following Admiral Holdo’s sacrifice, which blew the First Order’s fleet to pieces. But thinking that Phasma, who’s a trained and hardened soldier, could have been beaten by a guy that wasn’t that great of a fighter was kind of hard to accept.

Granted, Finn was supposed to keep moving forward, and circumstances being what they were, Phasma was a little too overconfident, but seriously, in a standup fight, Phasma should have had Finn down for the count since like it or not, she’s a superior officer in more than name, as one could see in the novelization of her story. Seeing how she came to the First Order would be enticing since this is one of the toughest troopers to come up through the ranks, and she’s one that actually scratched, clawed, and connived her way into a position that would allow her to take on the kind of authority that she was meant to wield. But to be taken out by the pairing of Finn and Rose, well, that’s less than desired.

One could only hope that Phasma might come back at some point in another movie, but counting on that idea might be futile since she did fall into a fiery pit as the star destroyer around her was slowly falling to pieces. But going back to her origin story, now that would be a lot of fun. The chances of seeing it don’t appear to be that great since the only time it appears that Phasma is bound to be mentioned is when TLJ comes up in conversation, and even then, the vitriol that’s still aimed at this movie is strong enough to overshadow Phasma’s influence. For a lot of reasons, it feels as though she was brought in as a giant tease that wasn’t meant to be anything great, but was there as a red herring to make people think that we might see something come of it, and would possibly forget how the sequel trilogy was slowly becoming a mixed bag of great and less than pleasing elements that were slapped together in an attempt to keep the audience placated. The hope is that Phasma might be given the respect she deserves eventually, but holding onto it doesn’t feel like the best idea.

Creating a limited series or movie showing her origin would be nice though. As it happens with many things, it would be a chance to expand the Star Wars universe a little more and possibly bring in the idea of her homeworld in a way that would make it available for another few stories. Plus, the novel that was written about her early life was kind of interesting and could easily be put into story form. Whether Gwendoline Christie would want to return, or if it would even be feasible to do so, is questionable, especially depending on how long Phasma had been with the First Order before her demise. There’s no doubt that there are plenty of people who would like to see this character return, especially since as a stormtrooper captain she stood head and shoulders above just about everyone, and it would be great to see her exploits before and after she donned the armor. The point is that was brought in as a badass, and then wasted in a short amount of time.

Bringing Phasma back into the mix somehow, meaning showing her earlier years, would be a fitting way to make amends for this, especially since wasting characters is a bad habit to cultivate. It’s interesting which characters earn the loyalty of the fans since as odd as it might sound, Phasma is a much stronger character than Finn or Rose, maybe not from a moral standpoint, but in virtually every way she’s a far more interesting part of the overall story. People can rant and rave about diversity all they want, but when it comes at the expense of characters that are capable of driving a story in a much more convincing manner, it’s not quite as effective.