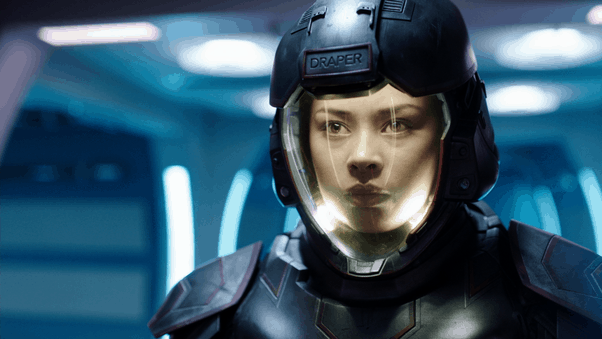 This almost feels like a silly question but the answer is pretty obvious to a lot of people even if there are alternative ideas that speak to a different aspect of the discussion. A lot of us have watched shows in which actors are required to wear spacesuits in order to move around on an unknown planet or in the reaches of space, right? What a lot of people are tripping on, and for good reason, is why there are lights inside the suits on just about every show and movie that’s ever been created with this element in it. An interesting thought is that they might serve a psychological purpose for those that are out in the darkness with other individuals as part of a group, as the idea of being able to see who you’re talking to instead of staring at a darkened face plate might do more for a person’s mental and emotional well-being. That does make a bit of sense considering that the isolation brought on by the suit itself and the apparent feel of being in the middle of some massive, empty space in the movies, or in unknown territory, could facilitate the need for a friendly or at least known face. That makes sense in a way, but the whole idea of lights in the helmet is still something that’s hard to get around, and here’s why.

The idea is that if the lights are low enough or aren’t there at all it would be that much easier to move about, since if anyone’s ever had the lights on in their car while driving down a darkened road then they know how distracting it can be and how much more likely it is to have an accident since that glaring light is bound to keep you from being able to see as much as you need to. The dash lights are usually okay, it’s almost like the heads up display that we see in Iron Man, as it sheds just enough light to be useful but not distracting. The lights that we tend to see inside the helmets on any given show or movie though look absolutely blinding and make it hard to think that the wearer of the suit would be able to see as much when they have lights shining up in their face or even from the sides. That obviously brings into question the practicality of the lights when it’s divined that people don’t operate quite as well when they have lights shining in their eyes and will more often than not stumble about as they try to find a way forward while dealing with the insistent light in their eyes.

One of the most obvious answers is that people want to see the actors’ faces and as such, with a darkened helmet and face plate it’s not always possible to see who’s wearing the suit. From just knowing who it is to being able to see their reactions, a lot of it is for the fans and not really for any practical reason. It could be argued that it’s practical enough to let the audience know who they’re looking, but it would also be great to see a sort of compromise since its hard to believe that anyone can move forward that easily with a light shining in their face in this manner. It does feel like a trivial thing to worry too much about, but at the same time it is one of those pervasive questions that people still have and that tends to come up now and then. In fact some people are actually genuinely bothered by the inclusion of such a thing and would love to see what might happen without it. The only time that I can recall this ever happening would have been in the original Total Recall movie in the dream sequence that Arnold Schwarzenegger experienced before waking up. At that point the faces were mostly hidden but there was still a chance to see the individuals behind the face plate. In some instances it might not be a bad idea considering that the lights appear to be facing forward, but in some cases it does look as though the lights would be reflecting off of the face plate, thereby blinding the individual and making it hard if not impossible to move forward with any confidence.

Topics like this are fun to come up with now and again since they feel like random thoughts but upon further inspection they turn out to be fairly interesting discussions that might actually stimulate intriguing conversations. It also makes a person think of many other things in movie and TV that we might be taking for granted from time to time. That by itself is an interesting thought since it does make me wonder just what else is being missed.