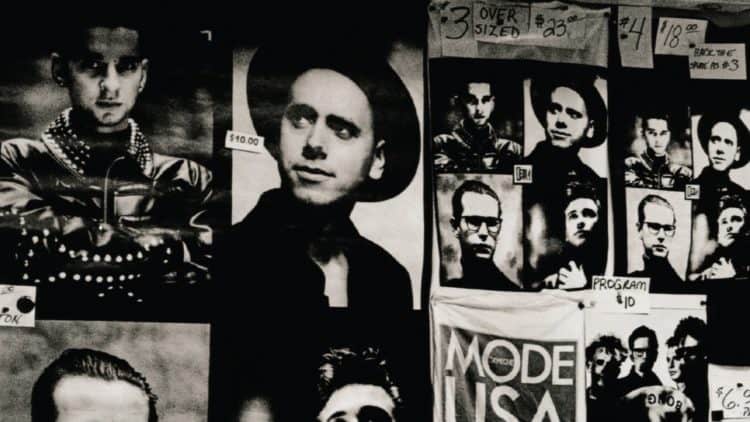 In 2020, Depeche Mode were inducted into the Rock and Roll Hall of Fame; for fans of the group it was long overdue, and in terms of the importance of the artistic merits of electronic music, it was well-deserved. One of the many milestones achieved by this iconic band was a movie no less, Depeche Mode 101. When it comes to movies, depicting music stars is riddled with cliches, and the depiction is usually so bad that even mockumentaries like This Is Spinal Tap (1984) are made to poke fun at the stereotypes. But Depeche Mode are not prototypical rock stars, and DA Pennebaker is not a rock documentarian known for choosing excessive bands to lend his filmmaking talents to. The iconic documentarian, forever immortalized for his film about Bob Dylan and the 1960s counterculture, Dont Look Back (1967), was likely an odd choice for going behind the scenes for a Depeche Mode tour. The band was known for their dark, icy, synth-laden songs and sound; not exactly folk-inspired lyrics and down home, everyman blues. But what he achieved with the film is one of the most unique rockumentaries ever, if for any other reason his cinema verité techniques when simultaneously documenting the experiences of a group of fans who were selected to join the band on tour. Here is why this rockumentary deserves wider attention.

Pennebaker was one of the original pioneers of the cinema verité movement in the 1960s. This was a filmmaking style that began in documentaries as a way of capturing real life as it unfolds with little to no narration or on-screen interviews with the subjects. Depeche Mode is a band that always projects an air of mystery both in their live performances and their interviews, so Pennebaker’s style was the perfect match for capturing the last leg of their massive 1987-1988 Music for the Masses Tour. The filmmaker has no interest in interviewing members of the band to get their thoughts on various subjects; he just allows his camera to roam freely from backstage dressing rooms, to tour buses, to hotel rooms, and of course, the stage. The mystery of illusion and silence are powerful things, and Pennebaker gives us just enough to document how life on the road is handled by the band, in addition to brilliantly filming their live performances which is what it is all for. The tour culminates in the now legendary final performance held at the Rose Bowl in Pasadena, California on June 18, 1988, the 101st and final date of the tour. We walk away from the film still knowing very little about the band, but understand them a bit better in hindsight, and this is due to Pennebaker’s non-intrusive, non-confrontational style of documentary filmmaking, which allows his subjects to feel at ease and breath easily.

One of the Earliest Examples of Reality Entertainment

The aforementioned group of young fans who win the opportunity to follow the band on tour is also documented by Pennebaker. At what can at first seem confusing–why is the director dedicating lots of screen time to fans instead of the band members–soon evaporates when we grow to know these everyday people all united by their love of Depeche Mode. Pennebaker conveys the importance and symbiotic relationship of a popular band with their fans, and this allows us to attain a dual perspective when viewing the film. The on-bus shenanigans and carefree behavior of the young troupe of fans is also reminiscent of something like MTV’s The Real World in how it captures the spontaneous moments between the fans. That show was still about 4 years away from premiering on MTV, so in many ways, Pennebaker has some of the earliest footage of the aesthetic that would soon come to be known as reality television long before it became oversaturated with game shows and competitions. The fans on the bus live and breathe the band and spend their time seeing the sights of the various cities they stop in and simply living their best lives for a time before they return to the real world of work and school. It’s a clever filmmaking technique on Pennebaker’s part, and represents one of the most unique styles of any music documentary before or since.

The Music for the Masses Tour was in support of the similarly-titled 1987 album, which contains some of the band’s best music of the 1980s. We can feel the excitement and energy in the air when the film shows clips of the band performing. The Rose Bowl show was an epic event, and the few scenes that Pennebaker includes of that performance represent some of the most energetic and spirited examples of band/fan symbiosis in music history. We can sense the immediacy in the air that summer night in 1988, and watching the film today may find you yearning for the days when living in the moment was more important than filming every single thing with your phone. Pennebaker never interjects to the band to give them directions in service of the film he is shooting, he just allows the events and proceedings to unfold as naturally and unobtrusively as possible. And the result is pure music/film magic.

Depeche Mode 101 is likely not as well known in the annals of rockumentary history because it is a film that is very much coveted by the band’s fans. For fans who actually attended the Rose Bowl concert, it currently exists as the only filmed document available to relive the memories. For others, the documentary is perfect for presenting a new style and atmosphere to the tried and true behind-the-scenes music documentary. It is easy to see how Madonna: Truth or Dare three years later was inspired by the style on display from Pennebaker in this film. Even if you are not a DM fan, this documentary is both unique and important in terms of what it represents and how it was captured.