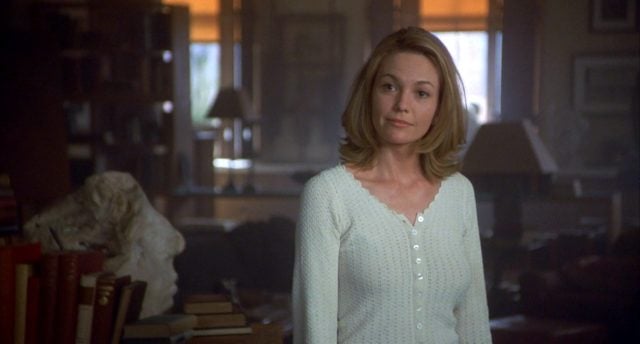 Diane Lane is a very underrated actress but she shows up in a lot of movies. Her acting talents have never been up for debate since she brings a wealth of quiet charisma to a set and a decidedly fiery passion for the craft that shows through when it has to. She’s played some of the greatest and some of the worst roles throughout her movie career. She’s also played in films she might have wanted to just bow out of in order to save her reputation. But she’s done them in an unwavering and very impressive manner that has allowed people to see that she’s the real deal and is someone that can be counted on to deliver a great performance. There have been roles that she might have wanted to just say no to, but even those are more about the movie than her part in it.

She’s a classic personality and one that is fun to see pop up from time to time.

For men and women alike it’s hard to get older and realize that you’re drifting apart from your partner in life. When a new person comes along that’s younger, vibrant, and free in all the ways you’re not it’s hard to resist that feeling that comes to the surface once again. Those that resist often wonder just what it might have been like to try it just one more time, while those that partake tend to regret it for the rest of their life.

A person would have to be at the top of their game these days in order to catch some of the more crafty cyber criminals. In this movie Lane goes after some of the worst and yet when one that’s particularly nasty starts targeting certain individuals it takes everything she and her friend and work associate have to nail the perpetrator down and finally put an end to the online horror.

This is one of those movies that she might have been better off saying no to. But really it was more about the mishandling of Judge Dredd than it was about her acting, since she was on point and made her role believable in a comic book movie that was fairly ridiculous. Even the remake with Karl Urban didn’t manage to do Judge Dredd much justice.

She seems to play the weaker individual with the will of iron that tends to need a lot of help at times, but it suits her since she’s got the attitude to play such a part. Diane Lane is the kind of woman that seems to have steel in her spine and a fire in her eyes when she needs it in order to push forth a role and make it seem like she’s not so much acting as she is reacting to a very real situation.

Life isn’t easy for those that fall in love with people that take on dangerous jobs. If you don’t think that deep sea fishing is dangerous try talking to those that had to live this terrible ordeal. They might point you to the way out of town or to the sea shortly before telling you to take a long walk.