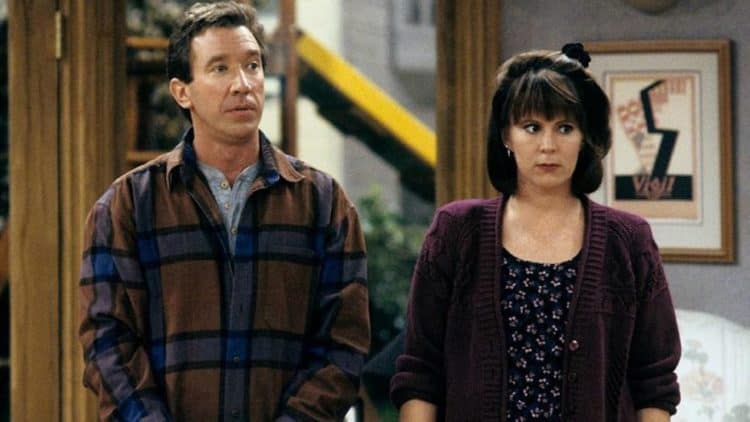 Sitcom moms in the 90s still had a pretty good range since they could be tough, they could be nice, and they could be kind of sweet, but more often than not they didn’t take a lot of crap from anyone. This was an era when women had definitely pulled away from being JUST the homemaker and the type of woman that agreed with her husband the majority of the time. A lot of sitcom moms in the 90s still ran the house in a very big way, but the dads and any other male figure living in the house were still expected to pull their weight now and again in order to make the whole thing work. In other words, this wasn’t the 50s-style household, the woman wasn’t going to do everything since it could be that she was educated, she worked, she didn’t feel like putting up with a lot of stuff from people, or all three rolled into one package. And to be fair, that was something that worked and still does some it makes for a more balanced show and something that people these days can relate to. One doesn’t need to be traditional to be a good sitcom mom, and they don’t need to be driven and able to bend their husband to their will either. The 90s sitcom moms were partners with their husbands in a lot of ways, but there were exceptions, like always.

Here are some of the best sitcom moms from the 90s.

Roseanne did have a softer side, but it was every bit as sarcastic as her regular self since she didn’t take much of anything from anyone and she wasn’t about to be seen as just another housewife that waited for her husband to come home at the end of the day. She also didn’t take any guff off of her kids and it showed since her daughters and son tried to get away with a lot but were usually caught and made to do something for their indiscretions, but since their kids were either like them or other members of their family it was kind of hard to keep them pegged every second, and Dan and Roseanne had to be on their toes a lot of the time.

Janet Hubert and Daphne Maxwell Reid had two very different styles for this character since Hubert’s version of Aunt Vivian was far more physical and wasn’t afraid to get down and dirty when it came to defending her children and her nephew, while Reid depended more on her sheer force of presence since she wasn’t quite as physical in nature. But both women managed to get the point across in their own way when they were on screen. Sadly, Hubert and Will didn’t really reconcile until many years later after she left the show, but Reid was a great stand-in and became a part of the cast in a big way even though she admitted that she didn’t want the part at first.

Marge is one of the more traditional wives that made this list, but she definitely evolved as time went on since she proved that she can lose it and she can bark at her kids and her husband now and then when she’s overwhelmed. She also puts up with a great deal of crap from her family but knows how to shoulder it and keep moving somehow since it might drive a lot of other people crazy. Throughout all these years though Marge has been one of the best TV moms ever since she’s been able to take on her own chaotic family and keep her own relatives at bay now and again while trying to do stuff for herself as well.

Jill Taylor had four boys in the house basically since Tim’s inability to be an adult at all times was something that had to be hard for the character to deal with sometimes. But while it’s true that he was like a big kid, she did know that she could rely on him for the important stuff and that they were partners in many things. She relied on Tim but knew that without her presence in the home that Tim and the boys might be eating off the floor and wearing the same clothes for days on end simply because she was the one that tended to make sure that they were clean and fed. Randy might have been okay, but the others might have been out of luck.

Marie was the old-fashioned mom that made certain that her kids were still fed, clothed, and taken care of despite the fact that they were middle-aged adults that could take care of themselves. As a TV mom though she was one of the best since despite all the nagging and worrying she was one of those that people knew was doing all of this from a place of love and was hard to argue with. The only role better than this one because it took her out of the wholesome act just a bit was her time in Grandma’s Boy.

90s sitcom moms were great because they could be nurturing but had a limit that their families knew not to cross.