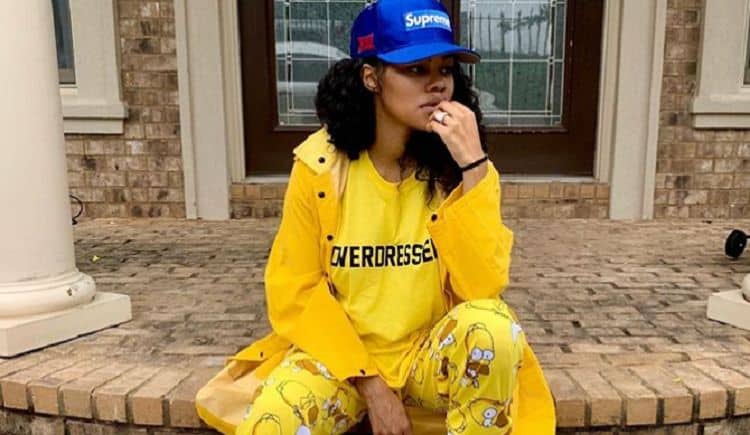 Teyana Taylor has been in the entertainment industry since she was just a teenager. In a business that often chews people up and spits them out, Teyana has managed to stay afloat and maintain her sanity. Although her first claim to fame was her appearance on MTV’s My Super Sweet 16, she eventually made a name for herself as a singer/songwriter. Her 2008 single, “Google Me” quickly started getting her a lot of attention. Although she took somewhat of a hiatus from 2008 to 2012, Teyana now has three albums under her belt. In many ways, she’s still getting started, and her fans are excited to see what the future holds. Continue reading for 10 things you didn’t know about Teyana Taylor.

1. She Was Signed To Pharrell Williams’ Label

Teyana Taylor got her first taste of stardom when she signed to Pharrell Williams’ Star Trak Entertainment label when she was just 15-years-old. The deal was meant to be for six years, but Teyana asked to be released. During an interview she explained that she still has nothing but love and respect for Pharrell, but asked to be released because she was looking for more creative freedom.

In most people’s opinions, the single “Google Me” is the song that put Teyana Taylor on the map as a musician. However, in the years since its release, she has grown to dislike the song. At this point, she doesn’t even like to listen to it. She told Rolling Stone, “I remember when “Google Me” came out. I cried and cried and cried and cried because I was just like, “This is just not me.” It didn’t match me. If you heard the actual album which we never even got the chance to release, “Google Me” is so random. It’s a great song, it just wasn’t for me.”

Teyana Taylor is a firm believer that women should have the freedom to choose what happens to their bodies – especially when it comes to pregnancy. Although she was excited when she found out she was pregnant with her daughter, Junie, she understands that everyone’s circumstances are different and some people may not be ready or willing to take on the responsibility of parenting.

4. She Knew She Wanted To Be A Performer When She Was Five

There’s no denying the fact that Teyana Taylor was born to entertain. She says she first discovered her love for performing when she was around five years old. She says she would dress up in her mother’s clothing and perform around the house with her cousin.

5. She Wants To Inspire Others

Even though entertaining is always the goal when Teyana puts on a show, another one of her goals is to inspire others. She especially wants to help empower women. As a wife, mother, and artist, Teyana knows first hand how difficult it can be to balance everything. She hopes that her career and her car can help women feel confident in knowing they can achieve everything they set out to do.

Teyana is truly a triple threat. She can dance, act, and sing and she refuses to focus on only one thing. Her ultimate goal is to “do it all” and she’s well on her way to doing exactly that. In the future, she wants to take on more diverse acting roles and she also wants to focus on creating fitness based content.

7. Being Pregnant Changed Her Life

Teyana is a very loving mother to her four-year-old daughter, Junie. She says that being pregnant with Junie was a life changing experience that also changed her creative process. Teyana told  W Magazine, “Being pregnant changed my life. I don’t know, it’s just weird when you’re about to be a mom and you’re building that bond. You can feel your baby growing inside of you. It’s a different kind of feeling of love. I have such a different outlook on things; a whole different hunger and intensity. She’s matured me so much.”

8. Dancing Is Her Form Of Self Care

With a schedule as busy as Teyana’s, finding time for self care isn’t always easy. However, when she does find the time, dancing is one of her favorite things to do to decompress. Although most people don’t think of dancing as a way to relax or unwind, that’s exactly what it is for Teyana.

Teyana has a long history with music. She isn’t just an artist, she’s a fan as well. She grew up listening to all kinds of artists, but has an extra special place in her heard for 80s and 90s R&B. Some of her favorite artists to listen to include Aaliyah, Safe, and India Arie.

10. Her Mom Is One Of Her Biggest Inspirations

Teyana has always had a very close relationship with her mother, Nikki. Nikki raised Teyana on her own in New York. Teyana says that her mom has always been a strong presence and her life and her hard work and dedication has inspired Teyana throughout the years.