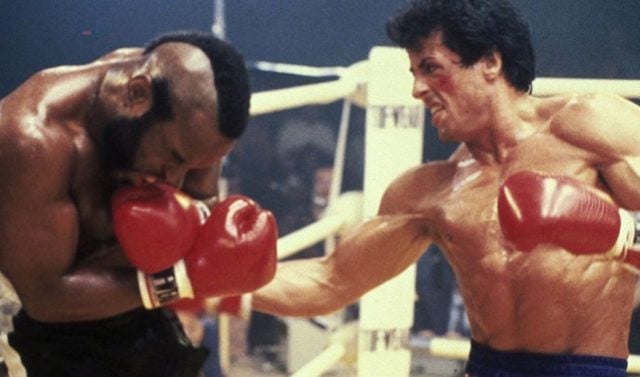 The short version of why Eye Of The Tiger was created as the theme song to Rocky III was because Queen wouldn’t allow Sylvester Stallone to use Another One Bites The Dust. The longer version goes into a little more detail since Stallone still used Queen’s song as a temporary background when he delivered the song to guitarist Jim Peterik. When Jim, who’s been associated with some of the biggest names in rock and roll, heard that Queen wouldn’t allow Stallone to use their song he was immediately grateful as he first watched the montage that Stallone and given him and the proceeded to get to work.

As it stand Jim couldn’t get the whole song down without seeing the movie in its entirety, so he managed to borrow the movie for a day with the promise that he would get it back to Stallone without fail. Once that was done he and his band got down to business and produced the song that would eventually become the theme song for Rocky III and a song that people continue to sing today thanks to its catchy beat and powerful message. If you’ve seen Rocky III then you know very well that the song is something that applies to a great many situations in life and can inspire pretty much anyone if they’re willing to listen.

The whole idea of the song’s title came from when Apollo Creed said that Rocky had lost the eye of the tiger, that drive and insane hunger for the title that had allowed him to become the champion. After winning the belt Rocky allowed the one thing to happen that can pretty much kill the momentum of any fighter, he got soft. Once he’d reached the top there was nothing else to prove, and he then started doing commercials, appearing on TV shows, allowing himself to made into a media darling. He forgot the streets and he forgot where he came from and eventually lost himself to the glitz and glam of the Hollywood lifestyle.

It eventually got so bad that Mick had to handpick his fights for him in order to protect him from the likes of Clubber Lang, who was another inspiration for the song since he was ‘risin’ up’, searching for his moment in the sunshine. The only difference was that Clubber was a straight up killer, he’d knock a person out for no better reason than because he could. Mick knew that if Clubber met up with Rocky that there would be no contest, that the champ would go down since he hadn’t fought anyone like Clubber in a long time.

But after Mick died Apollo stepped in, and he knew that despite the fact that he’d gone soft that Rocky still had more to offer. That was why Apollo didn’t give up and didn’t just throw in the towel finally. He knew that Rocky had a lot more to give and that he could regain the eye of the tiger that he’d had in their last fight.

That was all the inspiration that was really needed for this song.