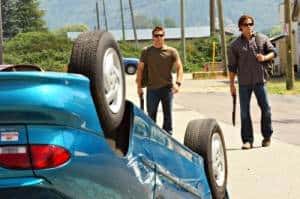 I pity any writer tasked with following up Eric Kripke on Supernatural, including the always awesome Sera Gamble. The fact is, in the shadow of the master practically anything is going to seem to register a little flat. Such was the case for the second episode of Supernatural’s fifth season, Good God Y’all. A perfectly good episode of Supernatural, but a ho-hum follow up to Kripke’s cinematic and mythos oozing jumpstart from last week. Let’s dissect.

The episode started out with a bit of bad news for everybody. The Winchester brothers’personal Angel, Castiel, is no longer figuratively or literally on their shoulder. From here on out, if they are going to contact Cass it is going to be via cell phone. The symbols and passage he etched into their ribs — which, via the miracle of X-Ray, we saw tonight — hides them even from him.

Cass shows up and informs a despondent Bobby that he will not be able to heal him. Bad news for the gruff one. As for the Winchesters’plan to kill Lucifer, Castiel skewers that as well — informing Sam and Dean that God himself would be their best bet. In order to find God, Castiel needs a special amulet that heats up in the presence of the creator. Luckily, Dean has one right around his neck. Very convenient. And inexplicable. Very. Inexplicable.

A random phone call from Rufus, who is having some Demon trouble in Colorado, shifts the focus back on the road as the boys are dispatched to help out their old friend. They arrive and find the only bridge into town destroyed. Heading in on foot, they find the town deserted. Closer examination reveals a good old friend, Ellen, hiding out with a handful of survivors. The town is awash with demons, and Ellen’s daughter Jo and Rufus is somewhere amongst them.

There are some trust issues as Sam and Dean go back into town to both gather supplies, and for good reason. Dean still senses that Sam is craving some demon blood, and when Sam has the opportunity to off a couple of black-eyed baddies he does pause for a sec and consider taking a taste.

Later, Sam and Ellen go out in search of Jo and Sam is captured. Here is where things get interesting. Jo and Rufus look like demons, but they are acting an awful lot like hunters. We flip perspectives a bit and find out that they are not demons at all, but to them Sam is possessed. Sam figures it out and the jig is up.

It turns out that all of this is being pulled off by one of the four horsemen of the apocalypse, and his magic ring. The brothers wind up cornering him and cutting off his ring finger. Nasty.

The end of the episode is reminiscent of the premiere with the boys trying to share their feelings, except this time Sam tells Dean he thinks it would be better for them to separate while he tried to find himself. The scene works, but I was a bit underwhelmed by it all. It was sort of as if it ‘˜just happened’, and would have been a lot more dramatic with some foreshadowing early on. Sam simply being tempted to drink blood didn’t really set this up well enough for me. I would have loved to have seen actually qualify his decision here, but I’m sure some of you Supernatural fans will vehemently disagree. Regardless, it is water under the bridge now. The Winchesters have broken up and are now on separate, solo tours. From the looks of things, Dean will be going on the hunt for God, and Sam will be going on the hunt for himself.

I would say this episode was definitely fit for the brand, and had a lot of nice moments, but felt positively skinny in the wake of the fangasmic onslaught that opened the game last week.